Memorial Service Set for Pilots Who Perished in Plane Crash 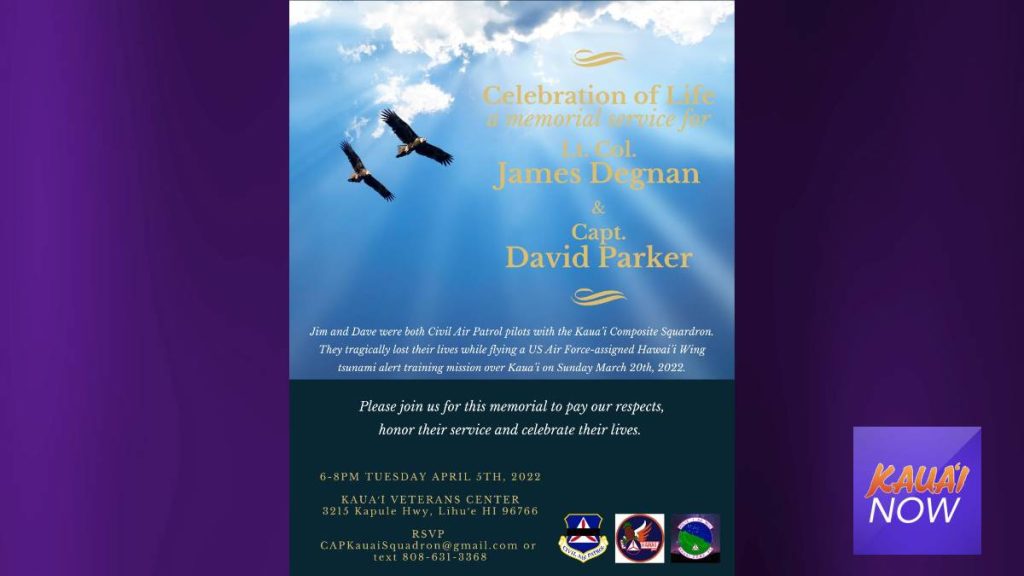 A celebration of life memorial service for the two pilots who died in a March 20 flying exercise over the Na Pali Coast will be 6-8 p.m. Tuesday, April 5.

The families of Lt. Col. James (Jim) Degman and Capt. David Parker, both Civil Air Patrol pilots with the Kaua’i Composite Squadron, are inviting the public to attend.

“Please join us for this memorial to pay our respects, honor their service and celebrate their lives,” an invitation to the service reads.

The pilots were flying a US Air Force-assigned Hawai’i Wing tsunami alert training mission over Kōke‘e on Sunday, March 20.

Investigators attributed bad weather as the cause of a crash.

According to a preliminary report by the National Transportation Safety Board, the Cessna 172N airplane went down just before 3 p.m. that day, taking the lives of Degnan, age 76, of Princeville, and Parker, age 78, of Kapa‘a. There were no survivors.

The accident airplane, owned and operated by the Civil Air Patrol, was conducting a routine hurricane/tsunami practice flight.

According to archived Federal Aviation Administration ADS-B data, after the airplane departed the Līhuʻe Airport, it initially proceeded southwest, then turned north as it neared the northwest side of the island. The airplane then turned to an easterly heading, towards an area of rising terrain.

ADS-B data stops near where the wreckage was found.

The scene of the crash has been turned over to the National Transportation Safety Board and Federal Aviation Administration for further investigation. It was the second fatal plane reported on Kauaʻi in March.