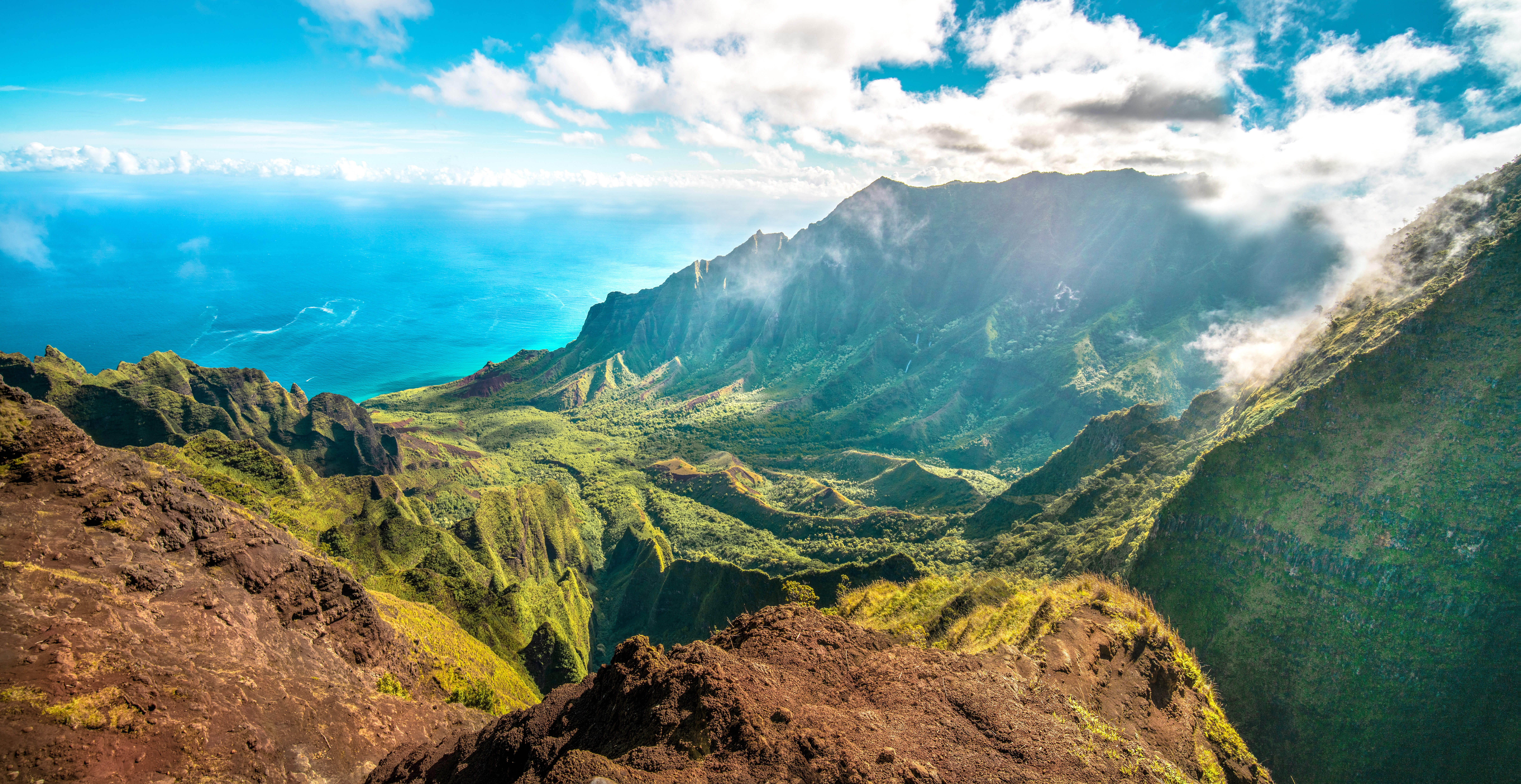 Today: Mostly sunny. Isolated showers in the morning, then scattered showers in the afternoon. Highs 79 to 84 near the shore to around 71 above 3000 feet. North winds around 10 mph. Chance of rain 50 percent.

Wednesday: Partly sunny. Scattered showers in the morning, then isolated showers in the afternoon. Highs around 80 near the shore to around 68 above 3000 feet. North winds 10 to 15 mph. Chance of rain 50 percent.

Wednesday: Partly sunny. Scattered showers in the morning, then showers likely in the afternoon. Highs 78 to 83. North winds 10 to 15 mph. Chance of rain 60 percent.

Today: Partly sunny in the morning then becoming mostly sunny. Scattered showers. Highs 71 to 77 in the valleys to around 64 above 4000 feet. North winds around 10 mph. Chance of rain 50 percent.

Wednesday: Mostly cloudy. Breezy. Showers likely in the morning, then showers in the afternoon. Highs 67 to 75 in the valleys to around 60 above 4000 feet. North winds 10 to 20 mph. Chance of rain 80 percent.

Wednesday: Partly sunny. Breezy. Scattered showers in the morning, then showers likely in the afternoon. Highs 69 to 79. North winds 10 to 20 mph. Chance of rain 70 percent.

Southeast winds will give way to sea breezes and interior clouds and showers this afternoon. An approaching cold front will bring a period of showers as it advances through the state Wednesday through Thursday followed by returning trade winds. A period of wetter trade wind weather is possible late this week into next week.

An increase in shower activity north and east of the islands is noted on the local radar composite as moisture increases within moderate southeast background flow. Light rainfall on the order of a few hundredths to around a tenth of an inch has also been observed over favored windward slopes of Maui and the Big Island. The remainder of the area remains largely cloud free as land breezes have pushed moisture offshore. Blocked southeast flow will once again give rise to sea breezes this morning into this afternoon. Given the increase in low-level moisture, it is reasonable to have increased expectations for inland clouds and showers today compared to yesterday. A few showers may be heavy on a localized basis, though ample mid-level dry air on this morning's Lihue sounding will provide a measure of stability that should keep shower intensity in check.
Meanwhile, a mid-level trough advancing toward the state is undergoing amplification south of 30N and east of the Dateline and will encroach on Kauai by late this evening. Signs of the approaching trough will be increasingly evident during the next 12 hours as offshore showers show greater vertical growth. A cold front lingering well west of the islands, rather ragged in appearance at press time, will likewise be reinvigorated by the approaching trough as begins to accelerate eastward toward the forecast area. The gradient will remain light through tonight over most of the area suggesting that land breezes will again maintain dry and stable conditions for Oahu through the Big Island tonight. Isolated thunderstorms will likely be confined to the waters north of the area where instability and synoptic scale forcing will be greatest, but thunder in the vicinity of or over Kauai is not out of the question by early Wednesday morning. Introduction of t-storms there will be given consideration in subsequent forecast updates. At this time, the greatest threat for any heavy rain over the western end of the state appears to be with any interior showers today. The cold front will advance through the state beneath the mid-level trough axis with breezy trades and rapidly increasing stability soon to follow. This will result in a limited time frame for typical trade wind showers to develop before dry advection and increasing stability bring an end to meaningful rainfall over Kauai and Oahu by Wednesday night. However, a robust convective response with locally heavy showers can still be expected over interior Maui and the Big Island as the trough approaches during peak heating on Wednesday.
Poor consensus among the global models arises as early as Thursday. The GFS, much stronger with the building surface high, favors a prolonged period of strong trades while the stalled cold front brings several days of showers to Windward Big Island. The weaker EC stalls the falls over central portions of the state favoring weaker trade winds and wetter weather focused over Maui County. This will then have ramifications heading into late weekend and early next week when global model consensus is actually quite strong that renewed mid-level troughing will invigorate the existing moisture field in the presence of breezy to strong trade winds. This will result in a period of wetter and more unstable trade wind weather statewide, but the remnant frontal band will serve as a focus for the heaviest rainfall.

Light to moderate east-southeast flow will give way to variable variable winds near Kauai and Oahu this afternoon then northerly winds near Kauai and Oahu tonight. VFR will prevail almost everywhere this morning, with the exception of isolated MVFR ceilings in SHRA over windward Big Island and east Maui. Expect widespread leeward sea breezes this afternoon, leading to isolated MVFR ceilings and visibility in showers over interior areas. As an approaching upper level trough leads to greater instability, conditions may deteriorate further over Kauai, where convergence ahead of an approaching front may produce more active afternoon convection.
No AIRMETs are in effect and none anticipated through the morning.

A weakened ridge just north of the islands will keep a light to moderate east to southeast winds over the islands today. A cold front moves from west to east across the state from Wednesday through Thursday producing periods of showers for all islands. A high pressure system will build in quickly behind the front with strong northeast trade winds blowing into the region after frontal passage. A Small Craft Advisory (SCA) was cancelled this morning as seas have dropped below advisory thresholds. Another northwest swell will build into the region Tuesday night will once again raise combined seas above SCA thresholds for most coastal waters through Thursday. Breezy trade winds building into the region with the cold front on Wednesday will bring SCA winds into most channel zones lasting through Friday.
A diminishing northwest swell will decrease surf heights today to minimal High Surf Advisory (HSA) thresholds for most exposed north and west facing shores. A new long period XL northwest swell (310-320 degree) is expected to rapidly build surf heights to High Surf Warning (HSW) levels starting later tonight. This next NW swell will peak on Wednesday with HSW conditions lasting into Thursday. These surf heights will gradually trend lower from Thursday into Friday. Another northwest swell is expected to potentially reach HSA levels for north and west facing shores by Sunday.
Small surf remains in the forecast for south and east facing shores this week.

This comments section is a public community forum for the purpose of free expression. Although Kauai Now encourages respectful communication only, some content may be considered offensive. Please view at your own discretion. View Comments
Trending Now
1Maunakea Telescope Finds Mysterious Green Laser Lights Blue Swirl Over Hawaiʻi Island 2Landfill Road Closures On Kauaʻi Due To Flooding 3Dont Miss Your Chance Tonight Is The Night A Rare Green Comet Will Be Closest To Earth 4State Issues Cease And Desist Letter To Kanaloa Octopus Farm On Big Island 5Hawaiian Word Of The Day Holoholona 6One Lane Closure On Kawaihau Road Begins Monday
Back to Top