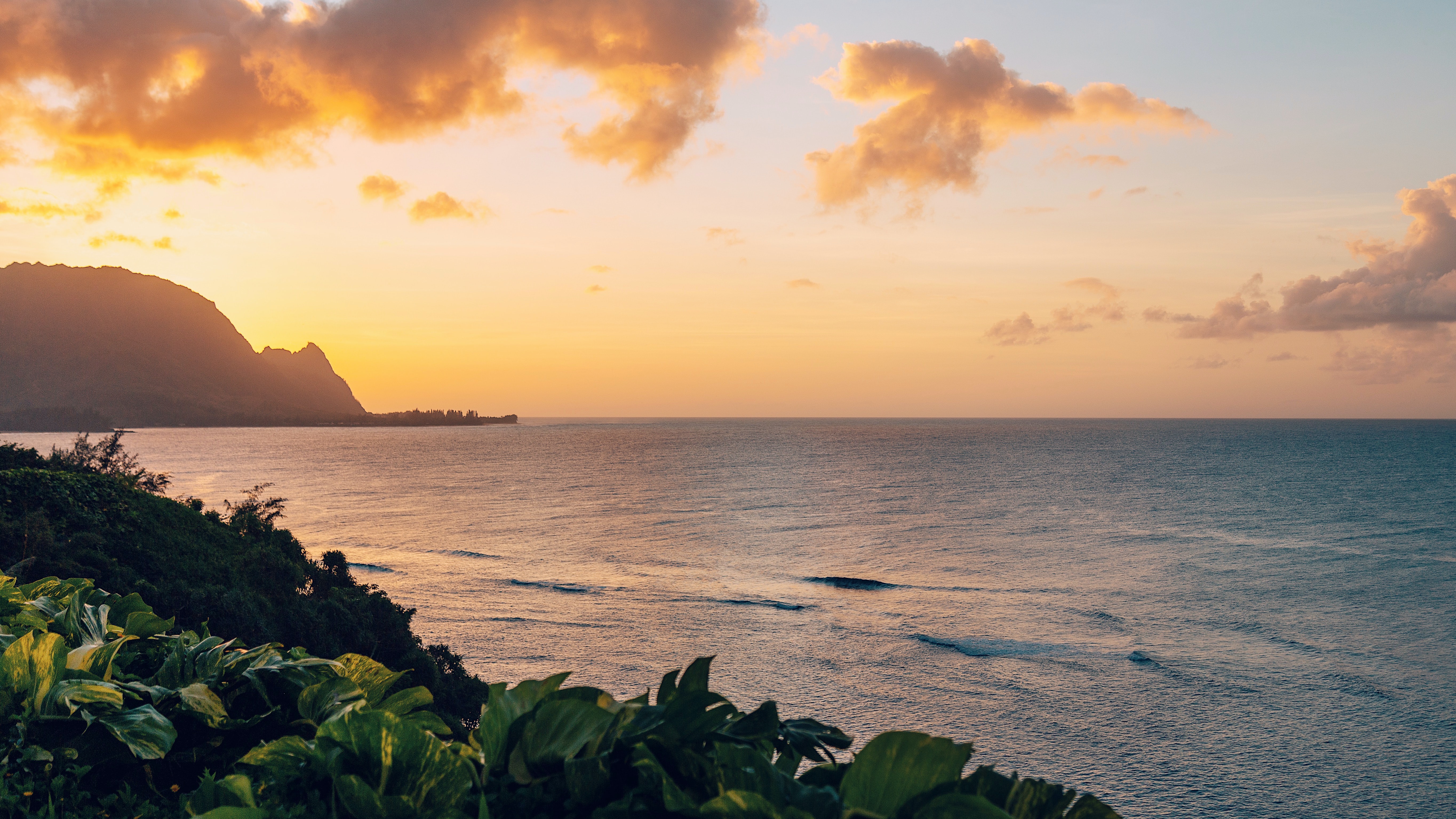 Today: Partly sunny in the morning then becoming mostly sunny. Scattered showers. Highs 67 to 74 in the valleys to around 60 above 4000 feet. Northeast winds 10 to 15 mph. Chance of rain 50 percent.

A weakening cold front will push through the state today, bringing a brief increase in clouds and showers, mainly over windward and mauka areas. Breezy northeast trade winds behind the front will help clear the haze across the state. Otherwise, stable conditions and light winds will return by Thursday with limited rainfall through rest of the week.

No changes to the forecast this morning with things seemingly on- track. The nearby ridge has been pushed southward overnight, and is to the east of the Big Island early this morning. A recent VIIRS satellite pass on the adaptive day/night band shows scattered clouds associated with the approaching cold front just north of Kauai at 2 am, and very few clouds found over the islands.
Air quality monitors continue to report areas of reduced air quality which is what we were seeing yesterday with the hazy skies. Northerly winds behind the front should help to clear the air at least for a couple days over the smaller islands.
Infrared satellite shows the band of clouds associated with the cold front starting to fall apart as expected with the weakening front. Satellite derived precipitable water (PW) shows a narrow band of increased moisture associated with the front. Expect the front to move down the island chain today, becoming more diffuse as it does so.
The overnight soundings show the inversion weakening at Lihue. As the front approaches the Big Island later today, the inversion there may weaken some as well. However, ridging remains aloft, which will continue to provide stability which in turn will help to limit rainfall totals.
The front will bring some stronger northerly winds that will spread across the islands from north to south, reaching Kauai this morning. We will also see some cooler dewpoints filtering down the island chain behind the front, which will likely make temperatures feel cooler tonight into Thursday morning. Expect dewpoints to slowly rise late Thursday through Friday.
As the northerly winds veer to the northeast, some light showers will ride in on the trades to the windward and mauka areas. High pressure will quickly build north of the state tonight and will be centered a few hundred miles northeast of the state by Thursday. Dry conditions will once again return across the state Thursday and Friday with light east to southeast winds over the state. Areas of haze will once again be possible on these days due to the light southeast winds in the low levels and very stable conditions. Winds should be light enough for the development of daytime sea breezes and overnight land breezes.
Over the weekend, a slight increase of mid-level moisture could bring the return of some light showers especially on Sunday as moderate easterly trade winds looks to briefly return. Otherwise fair weather will likely continue through the weekend.

A shallow cold front approaching from the northwest will pass over the Islands today then dissipate east of the Big Island on Thursday. The front is expected to reach Kauai around daybreak and Oahu by midday. The front will then press on quickly eastward, traversing Maui County in the afternoon, then weakening over Windward Big Island by late evening. Light rain is expected along and immediately behind the front. Brief MVFR CIGs are possible with this feature.
In the meantime, the air mass over the state is dry and stable. According to 2 AM IR satellite imagery, skies ahead of the front are mostly clear. A few ragged areas of low topped stratocumulus persist, especially over the Big Island, but these should dissipate shortly after sunrise.
VFR conditions will prevail all areas. No AIRMETs are in effect or anticipated at this time.

Hazardous boating conditions will continue through tonight due to a combination of moderate to fresh north to northeast winds associated with a ridge nosing eastward behind a diminishing front and the largest northwest swell of the winter peaking. A Small Craft Advisory and a High Surf Warning remain in effect through Thursday. A Marine Weather Statement has been issued to alert mariners of the potential for harbor surges, strong currents, and waves breaking in and near harbor entrances. Winds will quickly veer easterly Thursday as high pressure passes to the north, then out of the east to southeast direction Friday into the weekend (lightest over the Kauai and Oahu waters).
Surf along exposed north and west facing shores will rapidly this morning as the aforementioned northwest swell builds down the island chain. Observations at the offshore and nearshore PacIOOS buoys reflect this powerful swell building down the island chain this morning with peak energy being recorded in the 17 to 19 sec bands. This source will peak well above warning levels later today through tonight, then begin to ease as the swell shifts out of the north late Thursday through Friday.
A new long-period northwest swell associated with a hurricane- force low lifting northeastward from Japan will arrive Friday night into Saturday, then steadily build and peak by the end of the weekend (may near warning levels Sunday). Latest satellite- derived winds reflect this new system with a large area of gale to hurricane-force winds focused at the islands down the 300 to 310 degree directional bands.
Surf along south facing shores will remain at background levels throughout the weekend. Surf along east facing shores will generally remain small with exception for areas exposed to northerly swells.