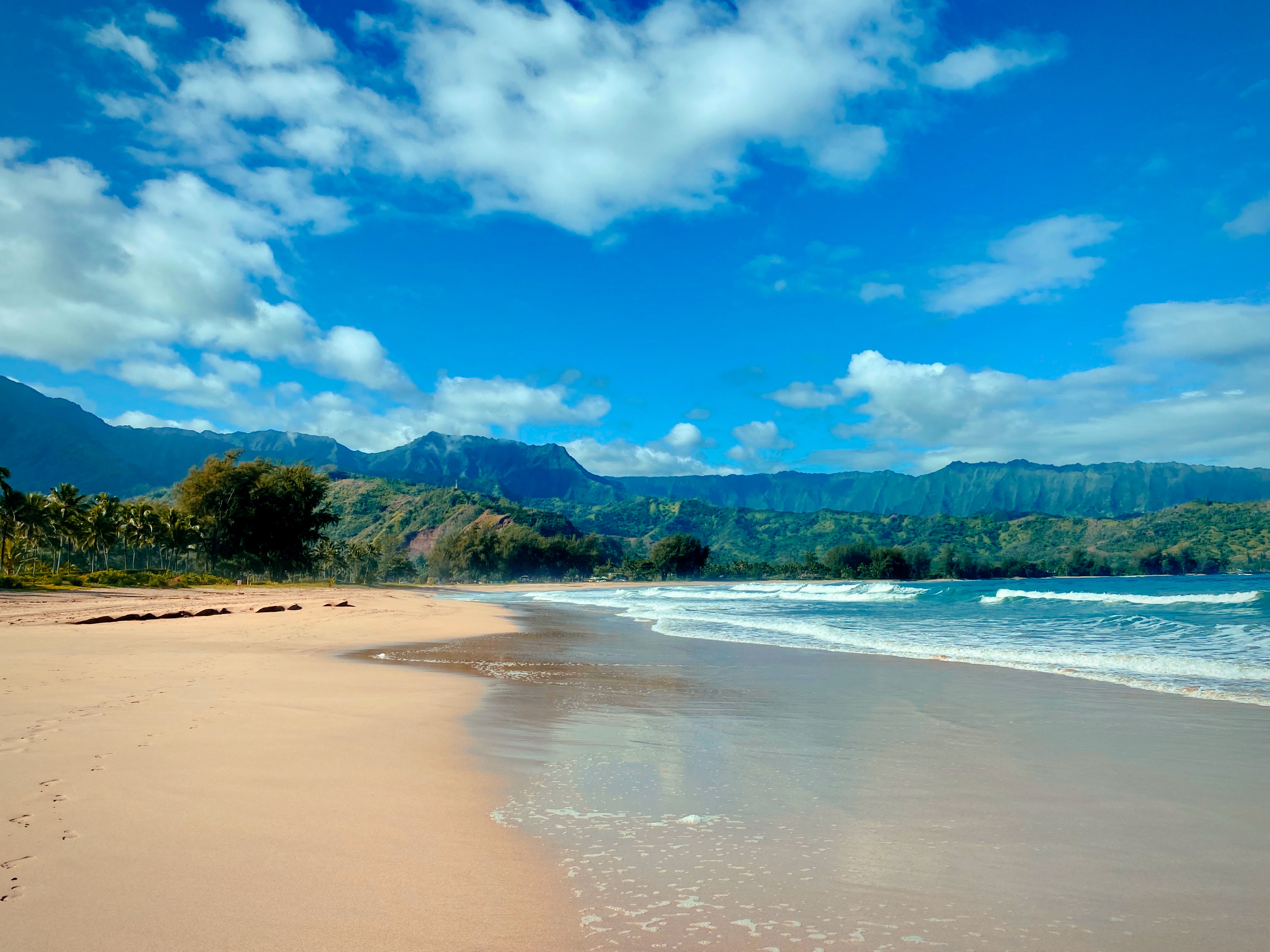 Today: Mostly sunny. Isolated showers in the afternoon. Highs around 84 near the shore to around 72 above 3000 feet. Northeast winds up to 10 mph shifting to the north in the afternoon. Chance of rain 20 percent.

Tonight: Mostly clear with isolated showers. Lows around 68 near the shore to around 57 above 3000 feet. Light winds becoming east up to 10 mph after midnight. Chance of rain 20 percent.

Monday: Mostly cloudy. Scattered showers in the morning, then showers likely in the afternoon. Highs around 81 near the shore to around 69 above 3000 feet. Southeast winds 10 to 15 mph. Chance of rain 70 percent.

Monday: Mostly cloudy. Scattered showers in the morning, then showers likely in the afternoon. Highs around 80. West winds up to 10 mph shifting to the south around 10 mph in the afternoon. Chance of rain 70 percent.

Today: Mostly sunny. Scattered showers in the morning, then isolated showers in the afternoon. Highs 71 to 79 in the valleys to around 66 above 4000 feet. East winds up to 10 mph. Chance of rain 50 percent.

Monday: Mostly cloudy. Isolated showers in the morning, then occasional showers in the afternoon. Highs 68 to 76 in the valleys to around 63 above 4000 feet. South winds up to 15 mph. Chance of rain 80 percent.

Monday: Mostly cloudy. Isolated showers in the morning, then occasional showers in the afternoon. Highs 73 to 80. South winds up to 15 mph. Chance of rain 80 percent.

Tonight: Partly cloudy with isolated showers. Lows 58 to 70. Northeast winds up to 10 mph shifting to the west after midnight. Chance of rain 20 percent.

Monday: Mostly cloudy. Isolated showers in the morning, then showers likely in the afternoon. Highs 73 to 80. South winds 10 to 15 mph. Chance of rain 70 percent.

Trade winds will ease off today as a front approaches from the northwest. A kona low will develop far northwest of the islands tonight, move southward on Monday, then shift west and away from the state thereafter. This low will shift winds to southerlies Monday, bringing deeper moisture up over the western islands during the first half of next week. Breezy to windy trades and more typical weather should return Wednesday and hold in place into next weekend.

Currently at the surface, a ridge of high pressure is located around 550 miles north of Honolulu, and is driving light to moderate trade winds across the island chain early this evening. Meanwhile, a stationary front is positioned around 750 miles west- northwest of Kauai, with a strong cold front around 1050 miles northwest of the Garden Isle. Infrared satellite imagery shows partly cloudy conditions across most of the state, with a bit more cloud cover in some windward areas. Radar imagery shows isolated to scattered showers affecting windward areas, with dry conditions in leeward communities. Main forecast concern continues to revolve around a developing Kona Low early next week and the potential for some heavy rain and thunderstorms in the islands.
The ridge north of the islands will shift eastward today and tonight, as the stationary front and strong cold front northwest of the islands gradually merge and begin making eastward progress toward the Aloha state. The trade winds will ease off through the day today, then shift southeasterly tonight. The band of low clouds and showers which was affecting the islands last evening has largely dispersed due to drier air moving in from the east. Rather dry trade wind weather is expected today. Showers will remain confined to windward slopes and coasts this morning, but some localized sea breeze development may allow for a shower or two to develop over interior and leeward areas this afternoon. As the winds gradually shift southeast tonight, showers will favor windward areas, but could transition over to mainly the coastal waters overnight due to sheltering effects in the southeasterly flow.
A kona low will begin to develop along the merged frontal boundary tonight, then deepen and begin a southward push on Monday while the cold front advances closer to the islands. Winds will shift southerly and increase to moderate speeds Monday, and deep moisture will be on the increase over the western end of the state as the front nears. We should see an increase in showers over the western islands as the day progresses, particularly on Kauai, with drier conditions prevailing over Maui County and the Big Island.
The latest model guidance remain in good agreement showing the kona low retrograding westward Monday night through Wednesday, which will effectively halt the eastward progress of the front Monday night. The front will remain nearly stationary Tuesday, then weaken into a trough and shift slowly westward Tuesday night and Wednesday. Moderate southerly flow is expected to continue Monday night, before shifting southeasterly Tuesday. Breezy to windy trades look to become re-established Tuesday night over the eastern end of the state, and Wednesday over the remainder of the island chain. With guidance coming into better agreement during the early to mid-week time frame, the potential for heavy rain and thunderstorms appears to be diminishing, although Kauai is certainly not out of the woods given the proximity of the front. A surge of deeper moisture ahead of the returning trades could bring some showery weather to east and southeast facing slopes of Maui and the Big Island Tuesday and Tuesday night as well, while drier conditions persist elsewhere outside of Kauai. A transition back to a more typical trade wind pattern is expected to occur from east to west across the state Tuesday night and Wednesday.
A new strong high will build north and northeast of the islands Wednesday night into next weekend, with typical trade wind weather prevailing along with breezy to windy trades.

A surface high pressure system far northeast of the area will maintain moderate trade winds today. Scattered to locally broken low clouds with embedded isolated showers will move into the windward sides of some of the islands today. This may produce brief periods of MVFR conditions over some east to southeast facing slopes. Otherwise, VFR conditions will likely prevail over most areas today. The trade winds will likely begin to weaken, and shift out of the east-southeast or southeast starting tonight or early Monday morning as a front approaches the region from the northwest. The weather pattern is expected to be relatively dry and stable from this evening through early Monday morning.
AIRMET Sierra for mountain obscuration has been cancelled for windward Maui, since conditions have improved there early this morning. No additional AIRMETs are anticipated today.

Surface high pressure far northeast of the state will maintain moderate trade winds across the area today. The background flow will shift out of the southeast to south, and strengthen from tonight into Tuesday as a cold front approaches the region from the northwest. A low pressure system is expected to develop along this front north-northwest of Kauai tonight. This feature is forecast to deepen and sink southward on Monday, then move slowly westward away from the area Monday night and Tuesday. The southerly flow will also likely cause an increase in clouds and showers across portions of the coastal waters from late Monday into Tuesday, especially near the western islands. There is a slight chance of thunderstorms over the waters west of Kauai starting Monday night. Combined seas may reach the Small Craft Advisory (SCA) threshold of 10 feet over some northwest waters starting Tuesday morning. Much stronger trade winds are forecast to develop after the low departs the region from Tuesday night through Thursday. Therefore, expect SCA conditions to eventually develop over all marine zones by mid-week. There is also a chance the trade winds will approach gale force in some of the windier waters on Thursday.
The current medium-period northeast swell appears to be 1 or 2 feet above guidance, but it is expected to gradually lower from later today through tonight. The current west-northwest swell will also continue to slowly fade through Monday. Surf produced by these swells will likely remain below the High Surf Advisory (HSA) criteria along exposed north and east facing shores. Gale to near storm force winds along the backside of the deepening low pressure system, which was mentioned in the paragraph above, will likely send a large, medium-period northwest swell (310-330 degrees) into the coastal waters starting Monday night. This large swell will likely cause surf to be well above the HSA thresholds along most north and west facing shores starting Tuesday.

This comments section is a public community forum for the purpose of free expression. Although Kauai Now encourages respectful communication only, some content may be considered offensive. Please view at your own discretion. View Comments
Trending Now
1Dont Miss Your Chance Tonight Is The Night A Rare Green Comet Will Be Closest To Earth 2Marine Debris Contributed To Death Of Sperm Whale Found At Lydgate Beach On Kauai 3Hawaiian Word Of The Day ʻolelo 4Wrongful Death Suit Of Security Guard At Zuckerbergs Kauaʻi Ranch Gets Trial Date 5Hawaiian Word Of The Day Hoolaulea 6Koloa Rum Company Debuts Rainbow Warriors Bottle
Back to Top