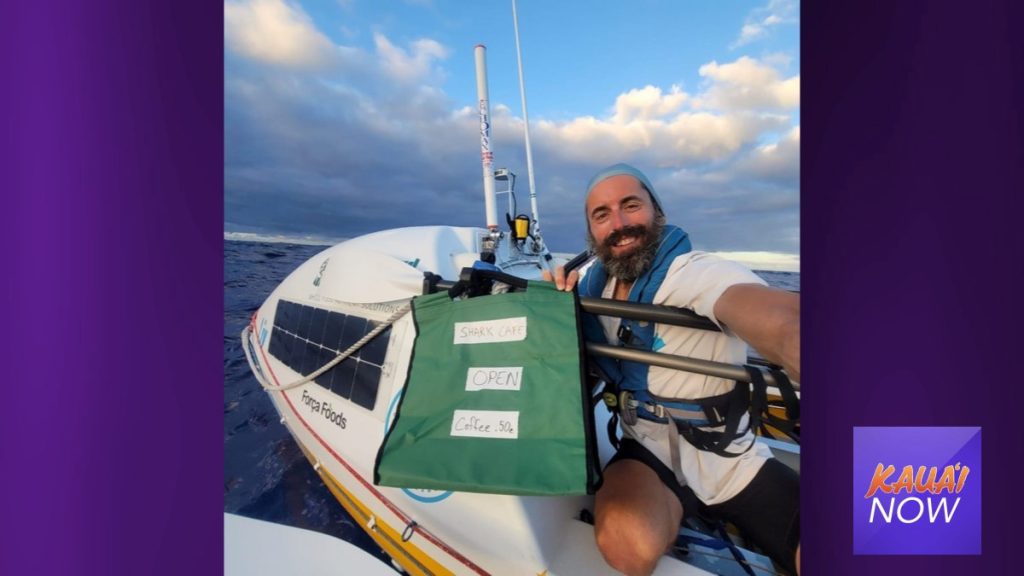 A day after the United States celebrated the Fourth of July, Carlo Facchino left San Francisco in his 19-foot, classic-style ocean rowboat. Just him. Alone.

As of Tuesday morning, 70 days later, the endurance athlete from Fremont, Calif., was about 62 nautical miles away from Hilo and within grasp of accomplishing his dream.

He is expected to make it to the Wailoa boat harbor either by sunset Wednesday or sunrise Thursday. His land support and partner, Betsy Everett, is ready.

Everett and Dawn Marie Wadle, a family physician and Facchino’s medical consultant for the trip, are in Hilo to greet him when he finishes the 2,400-mile journey across the Pacific.

“I think he is loving it, but it’s hard,” Everett told Big Island Now on Monday. “I do some endurance events also, and I know it is like a roller-coaster. One minute: ‘This is beautiful. I’m feeling great. This is awesome.’ And then the next minute, you’re like: ‘I don’t know how I’m going to survive another minute. I need this to end. This is horrible’.”

Facchino has faced several challenges during the trip, including a broken seat and losing food rations because of a leak in one of the boat’s hatches. And he suffered from “pizza butt,” what rowers call the condition of rubbing soars on the rear end.

“It has been a challenging row,” Facchino said Friday through Everett in an email to Big Island Now. “There have been lots of hurdles. I mean, you can’t expect everything to go smoothly on a ocean row, but this trip has been especially challenging.”

He’s done other ocean rows prior to his solo run, but as part of a team.

“On a solo row, you definitely have to be more self reliant — you are forced to have to be,” Facchino said. “Any hurdles that come along, you have to deal with them alone. Rowing solo adds this element, which is a lot more challenging.

“On a team row, when you take your break to eat and rest, your teammates start rowing so the boat is always moving towards your destination. When I stop rowing as a solo rower, the boat may keep moving with the winds and currents, but it may not be in the right direction.”

Everett, who has been in daily contact with Facchino, said she thinks he’s loving it more than he is miserable.

Facchino concurred: “I am still absolutely loving it 100% out here. I really enjoy rowing at night — it’s my favorite time to row. Being out here alone at night, with the solitude, is really a special time that I truly enjoy.”

But he can’t wait to step on the ground in Hilo, and eat. And then eat some more.

Faccino has had to ration food, leaving him “hungry all the time,” which is not good for somebody who is constantly burning extra calories every time the oars hit the water.

“I just want to eat and am really looking forward to food — specifically fresh fruit, pizza, peanut butter and 100% or 90% dark chocolate,” he said.

Everett is proud of her partner for doing the solo row, which took more than a year of planning and an adventure he had talked about doing for years.

Facchino had hoped to break the record of 52 days for the same trip set in 2014 by Rob Eustace, but his main goal was to get to the Big Island — and safely.

In addition to the Big Island being the closest island to San Francisco, Facchino picked it for his finish because he had a family friend on the island, had visited it as a child, and had studied geology and been fascinated by the volcanoes.

“This is a very meaningful place for him to come by his own power,” Everett said. “Not flying, but actually rowing here, to a place that he had such great experiences as a kid. I think he contributes coming here as a kid and seeing the magic of the Big Island to wanting to study more about geology.”

His arrival also will be a relief for Everett, who has faced her own challenges as his support.

“We’re ready for him to be home. I’m not gonna lie,” Everett said.

Wadle told Big Island Now on Monday: “As land crew, Betsy hasn’t necessarily had immediate access to him. She’s been on call, so as soon as she gets anything from him, she knows. But if she texts him, he doesn’t get it right away. The sat phone doesn’t sit on, just waiting.”

Everett said nothing is immediate when it comes to communicating with Facchino while he’s on the open ocean.

“I can send him a message, but it may be hours before he reads it. Or sometimes, I think especially early on, depending on the weather, his response, he may send something back and it’s totally not related,” she said. “So it’s kind of guessing. You’re sending a message out there and crossing your fingers — maybe he’ll get it, maybe he won’t.”

It’s also been difficult for her to hear his vulnerability, something uncharacteristic for the strong man she knows, and not be able to help.

“Those have been the hardest times because I want to be able to take that away and fix it and I can’t,” Everett said. “So I just have to remember that will pass, and I have faith in him in who he is. I’ve been reminding him that he can do it and that he’s capable and that I’m here for him however he needs it.”

Facchino’s three other supporters, cats Cashew, Oreo and Baby Girl, have been on the speaker phone with him. They recognize his voice.

Big Island Now will be at the Wailoa boat harbor when Facchino reaches the Big Island to provide updates.