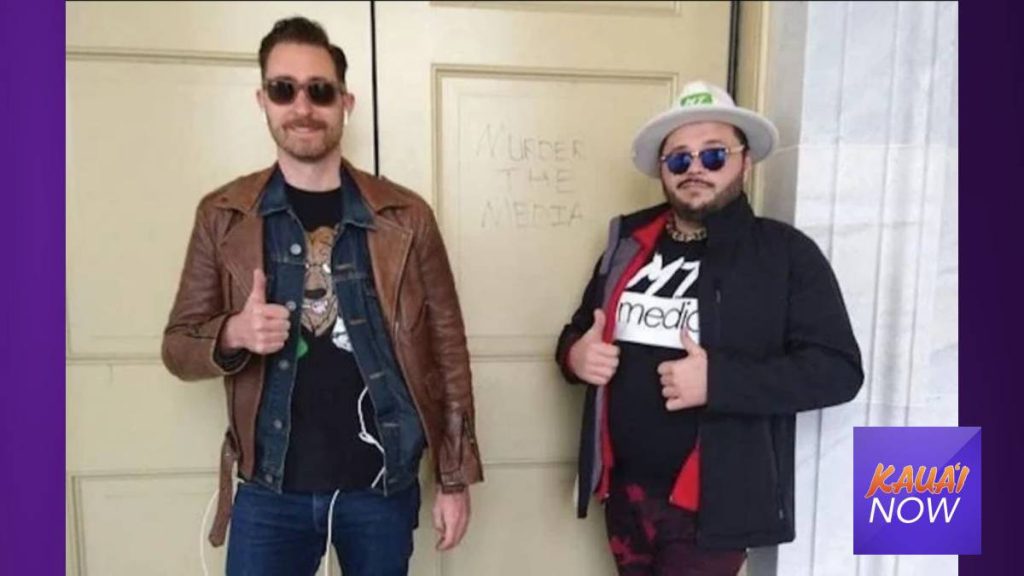 A man who founded the Hawai‘i chapter of a right-wing extremist group has pleaded guilty to a felony charge for his actions during the Jan. 6, 2021, breach of the U.S. Capitol in Washington, D.C.

According to the U.S. Attorney’s Office for the District of Columbia, 36-year-old Nicholas Ochs of Honolulu and 32-year-old Nicholas DeCarlo of Fort Worth, Texas, pleaded guilty Friday, Sept. 9, to obstruction of an official proceeding. The DC U.S. Attorney’s Office said in a press release that the actions of Ochs, DeCarlo and others disrupted a joint session of U.S. Congress convened to ascertain and count the electoral votes related to the 2020 presidential election.

Ochs was arrested Jan. 7, 2021, in Honolulu. DeCarlo was arrested Jan. 26, 2021, in Burleson, Texas. They are scheduled to be sentenced Dec. 9 by a federal district court judge and face a maximum of 20 years in prison and potential financial penalties.

According to court documents, Ochs is the founder of the Hawai‘i chapter of the Proud Boys. The extremist group describes itself as a “pro-Western fraternal organization for men who refuse to apologize for creating the modern world, aka Western Chauvinists.” As of Jan. 6, 2021, Ochs also was an “Elder” within the Proud Boys organization. Elders had a senior leadership role within the group, with responsibilities including the approval of new chapters.

According to the U.S. Attorney’s Office press release, Ochs traveled from Honolulu to Washington, D.C., arriving Jan. 5, 2021, and stayed at a hotel in Virginia that night with DeCarlo, who traveled from Texas. The two attended a rally Jan. 6, 2021, at the Ellipse and then marched to the Capitol, where they joined other people who were illegally on the grounds. They arrived at the West Front, near scaffolding in place for the inauguration, where a line of police was attempting to keep the mob from the inaugural stage.

Both men threw smoke bombs at the police line.

They then climbed the stairs to the Upper West Terrace. At about 2:23 p.m., Ochs and DeCarlo illegally entered the Capitol through the Senate Wing Doors. They moved through the Crypt, where they filmed themselves smoking cigarettes; Capitol Visitor’s Center; East Foyer; Statuary Hall; and the Rotunda before exiting at 3 p.m.

Then, they approached the Chestnut-Gibson Memorial Door to the Capitol. There, DeCarlo wrote the words “Murder the Media,” the name of the men’s social media channel, with a marker on the door as Ochs recorded the action, according to the U.S. Attorney’s Office.

DeCarlo and Ochs also rummaged through a Capitol Police duffel bag by the Memorial Door, from which DeCarlo took a pair of plastic handcuffs. The U.S. Attorney’s Office press release said that while walking away from the Capitol, with the building visible behind him, Ochs said, “Sorry we couldn’t go live when we stormed the f—-in’ U.S. Capitol and made Congress flee.”

The case is being investigated by the FBI’s Washington Field Office as well as the Fort Worth Resident Agency of the FBI’s Dallas Field Office and the FBI’s Honolulu Field Office. Assistance has been provided by the Metropolitan Police Department and the U.S. Capitol Police.

In the 20 months since Jan. 6, 2021, more than 870 people have been arrested in nearly all 50 states for crimes related to the Capitol breach, and nearly 300 people have been charged with assaulting or impeding law enforcement.