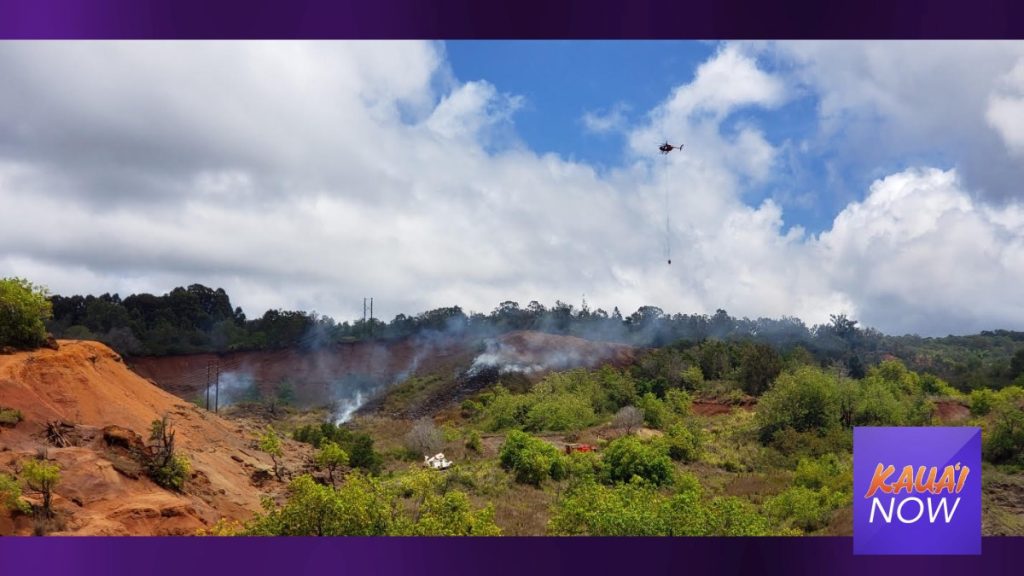 No injuries were reported following a 2-acre brush fire that broke out on Monday in Kōke‘e.

According to a preliminary report, the fire started shortly before 11 a.m. when Kaua‘i Island Utility Cooperative contractors were working on a power line. KFD personnel was dispatched to the area between mile markers 3 and 5 on Waimea Canyon Drive.

Personnel with the Hanapēpē and Waimea fire stations, Tender 1, Air 1, the on-duty Battalion Chief, the Kaua‘i Police Department, and the Department of Land and Natural Resources Division of Forestry and Wildlife responded to the incident.

Firefighters arrived on the scene and discovered the fire was located approximately 200 yards from the roadway, closer to mile-marker 6. Because the fire was inaccessible to vehicular access due to steep terrain, Air 1 was deployed to slow the fire’s progression. Overlooking the fire from a high vantage point, DOFAW personnel assisted with a safety watch and directed Air 1 with water drops.

After cutting a trail through the trees to gain access to the bottom of the fire, firefighters utilized forestry water backpacks to slow the spread of the fire. DOFAW fire personnel joined in the effort, putting out hot spots along the perimeter.

During their response, the fire jumped to a small ridge and spread down another valley. Personnel on the ground and aboard Air 1 relocated their efforts and quickly knocked down the blaze.

DOFOW personnel cut a fire break in the area to ensure a fire did not relight in the valley.

DOFAW later relieved KFD personnel after the fire was extinguished and took command of any additional hotspots.