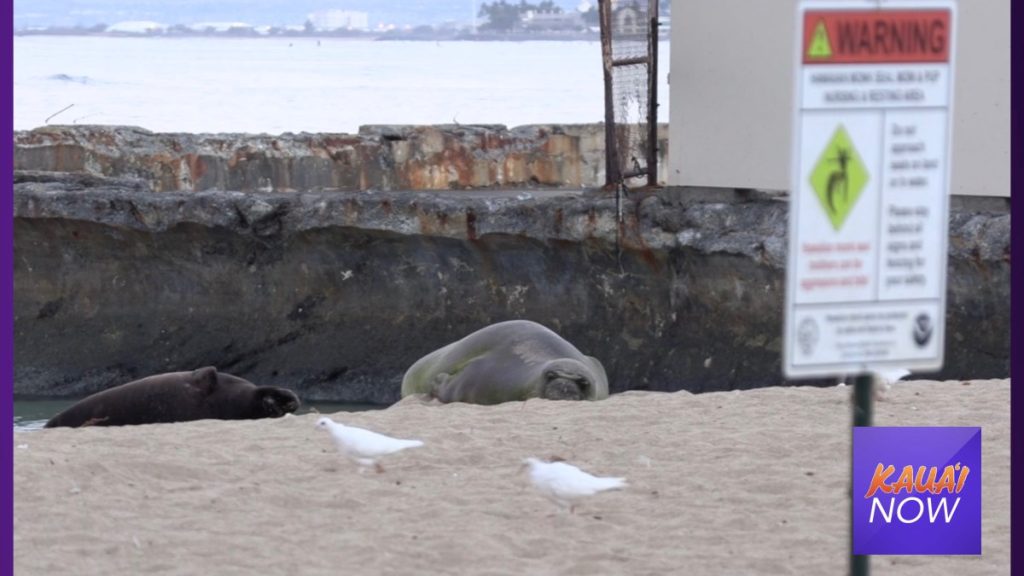 The DLNR Division of Conservation and Resource Enforcement has enforced a 50-yard cordon, or perimeter, around Hawaiian monk seal Rocky and her pup at Kaimana Beach on O‘ahu as of Thursday morning.

This is a government operation to protect public safety and the safety of the monk seals. On Tuesday, DOCARE announced officers are maintaining an around-the-clock presence to protect people and seals, where for the third time in five years a mother seal is nursing a pup, prior to it weaning.

“Government agencies have maintained both official and volunteer presence and signage since the pup’s birth, but these have failed to deter a number of people from approaching the monk seals, creating a dangerous situation,” said DOCARE Chief Jason Redulla Wednesday, Aug. 3. “We know people want to see them, but for everyone’s safety and the protection of the seals we will have a 24-hour law enforcement presence at Kaimana until the pup weans in two-to-three weeks.”

Rocky and her pup have been at the busy O‘ahu beach for about three weeks. Their presence has led to beach closures and stepped-up outreach, education and enforcement. Representatives from the DLNR Division of Conservation and Resources Enforcement and the DLNR Division of Aquatic Resources; NOAA Fisheries; and the City and County of Honolulu’s Ocean Safety Division and Dept. of Parks and Recreation have been in close contact after numerous people have gotten too close to the wild mammals; including one swimmer who was bitten by the protective mother seal on July 24. The 60-year-old woman received minor injuries in the encounter.

At dawn on Thursday, DOCARE officers were joined by Hawai‘i Marine Animal Response, HMAR, an organization that mobilizes volunteers to watch over resting monk seals.

“We’re definitely glad to get the added support from the state,” said HMAR president Jon Gelman. “We look forward to working with the DOCARE officers on the scene as we watch over Rocky and her pup together. We couldn’t do what we do without the joint efforts of our partners and the community here.”

While discussing the details of the 50-yard cordon, DOCARE will enforce, with O‘ahu Branch Chief John Silberstein, volunteers on-duty say they really appreciate the extra help. They added that most people are completely respectful of the guidance they provide and having officers on the beach to deal with anyone who ignores the rules is a significant help.

DOCARE is in the process of establishing coverage schedules for both land-based officers and officers on jet skis to establish the 150-foot cordon in the water when the seals are out swimming. They’ll be working closely with the HMAR volunteers to ensure that whenever the cordon is adjusted on the beach or in the water, people stay outside it.

DLNR recognizes the popularity of Kaimana to swimmers, paddlers, and beach users. It’s expected both Rocky and her pup will move on to another area after weaning and encounters will be much less of a concern.