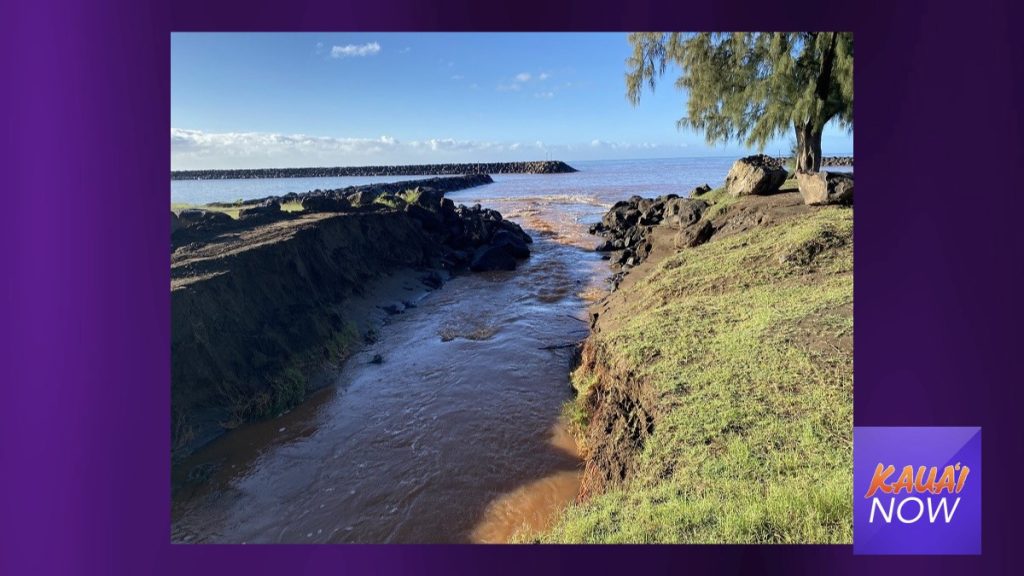 An environmental law organization filed a lawsuit on behalf of Nā Kia‘i Kai and Surfrider Foundation against Kaua‘i County and director of the state Department Health for violating the Clean Water Act.

According to the Earthjustice lawsuit, the County of Kaua‘i has been violating, and continues to violate, the Federal Water Pollution Control Act, also known as the Clean Water Act, by discharging drainage waters contaminated with sediment and other pollutants from the Kīkīaola Harbor Drain – an unlined, earthen ditch located on West Kauaʻi’s Mānā Plain that the county owns, operates and maintains – into the Pacific Ocean without the required National Pollutant Discharge Elimination System, or NPDES, permit.

The lawsuit states that in a 2019 victory for the community groups, the U.S. District Court for the District of Hawai‘i ruled that discharging pollution into the ocean from the Mānā Plain’s plantation-era drainage ditch system, including from the Kīkīaola Harbor Drain, requires a federal permit under the Clean Water Act. After the ruling, the county took over operation and management of the Kīkīaola Harbor Drain from the state Agribusiness Development Corp.

“The County of Kaua‘i takes seriously any need to comply with all relevant environmental regulations,” stated Wade Lord, County Capital Improvements Program Manager. “When first contacted by Earthjustice in March 2021 about the need for proper stormwater management and approvals, we immediately were responsive and contacted the state Department of Health on what next steps we need to take under law. Notwithstanding DOH’s initial determination on what environmental approvals are necessary, we remain committed to fulfilling all legally required actions. As determinations may potentially change, we will immediately move to complete those required actions under DOH direction. The county has applied for all necessary permits, to open the outfall in emergency situations to prevent flooding in Kekaha town. We are currently waiting for state approval.”

The groups seek to protect subsistence fishing grounds, surf breaks and other recreational areas from continued contamination with pollutants, including sediment that muddies the water and suffocates the reef.

Community members catch fish and crab in Kīkīaola Harbor and also surf and swim in the surrounding areas.

“The Health Department is more like the Do Nothing Department when it comes to protecting our oceans from pollution,” said Lawrence Kapuniai, a Kekaha resident and member of Nā Kia‘i Kai. His family has been fishing and gathering along the West Kauaʻi shoreline for generations. “This ocean is our icebox, and I am not ready to give up on getting it clean so that the next generation can learn to fish at Kīkīaola, the same way I did. That is why we are demanding this new permit to control the pollution dumped into our ocean.”

“The Department of Health’s No. 1 job is supposed to be protecting human health and the environment,” said Earthjustice attorney Elena Bryant. “It makes zero sense for the department to designate Kīkīaola as an impaired water body due to turbidity and then ignore the very effective tool they have for reducing that pollution, even after a court directly ordered them to do so.”

According to the lawsuit, the pollution from the Kīkīaola Harbor Drain has had detrimental effects on, and poses an ongoing threat to, the water quality and health of West Kauaʻi’s marine waters and ecosystems, particularly the coastal waters along the Kapilimao Watershed, including at Kīkīaola Small Boat Harbor.

“The discharge waters visibly contain sediment, including from the eroding drainage ditches that lead to the outfall of the Kīkīaola Harbor Drain,” the lawsuit states.

“The poisoning of our oceans is both an environmental problem and a public health problem,” said Dr. Carl Berg, Kauaʻi resident and senior scientist for Surfrider Foundation, Kauaʻi Chapter. “Westside ditch waters must be cleaned up and it is long overdue for the Department of Health to do its job and force polluters to stop putting our health at risk.”

The county and DOH director have 21 days to answer the complaint. The federal Clean Water Act requires the county to apply for an NPDES permit and minimize pollution from Kīkīaola Harbor Drain. The Health Department is the state agency tasked with administering the NPDES permit program. An NPDES permit to discharge into the nation’s waters is a tool to reduce water pollution.

Read the full lawsuit below: