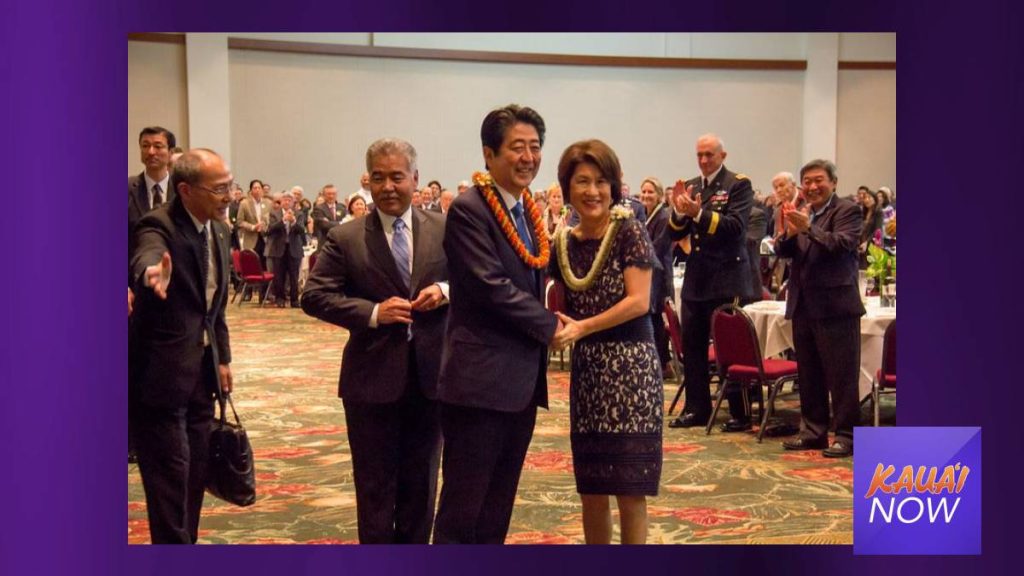 Hawai‘i leaders expressed sorrow and shock at the assassination today of Shinzo Abe, Japan’s former prime minister, a leader with whom local officials worked closely over the years as the two islands share strong cultural and economic ties.

Abe died after being shot during a speech in western Japan, media outlets across the world reported.

The country’s longest-serving prime minister, Abe was campaigning for a parliamentary election in Nara when he was shot from behind, NPR reported. He arrived at Nara Medical University without any vital signs and was eventually declared deceased.

“Police in Nara arrested the suspected gunman, who was carrying what appeared to be a handmade, double-barreled weapon,” the NPR article stated.

Hawai‘i Gov. David Ige ordered that the United States flag and the Hawaiʻi state flag be flown at half-staff at the Hawaiʻi State Capitol and upon all state offices and agencies as well as the Hawaiʻi National Guard in the State of Hawaiʻi from sunrise until sunset, July 10. The flags are already at half-staff honoring victims of the Highland Park shooting until sunset on Saturday, July 9.

“I’m devastated by the news of former Prime Minister Abe’s assassination,” Ige said in a statement Friday. “This senseless act of violence has taken the life of a true friend of Hawaiʻi. In our multiple meetings, we shared stories of our past, embraced our common culture, and continued the quest for reconciliation and partnership that has developed between the United States and Japan. Dawn and I extend our deepest condolences to the people of Japan, Prime Minster Abe’s wife, Akie and the family members and friends of this world leader who exemplified the aloha spirit and lived his life seeking peace in the world.”

U.S. leaders, including President Biden and President Trump, expressed condolences for Japan’s loss, as captured in a NBC News article.

Another NPR article posted Friday said that Abe was a powerful political force who wanted a more militarized Japan and to change the constitution during his tenure.

“In his resignation speech in 2020, when he had to step down due to ill health, he was quite explicit in saying that he hadn’t achieved everything that he wanted. He wanted to resolve the territorial dispute with Russia, to resolve a hostage issue which has been lingering with North Korea and to revise the constitution. None of that he actually managed. But overall, he still had some really major achievements. Whilst he didn’t revise the constitution, he reinterpreted it to allow Japan to do more to assist its allies in military operations,” James D.J. Brown, associate professor of political science at Temple University’s Japan Campus, is quoted in the article.”

“I am deeply saddened to hear of the untimely death of Shinzo Abe, former Prime Minister of Japan. His kindness and leadership have touched us all, especially here on Kaua‘i where our ties with Japan are tightly knit,” Kawakami stated. “While I did not have the opportunity to meet him in person, I was fortunate to travel to Japan in 2019, where we met members of his delegation and was treated with the utmost respect and aloha. On behalf of the Kaua‘i community, we express our sincere condolences to Prime Minister Abe’s wife Akie, his family and loved ones, and the people of Japan, along with our four sister cities of Suo Oshima, Ishigaki, Moriyama, and Iwaki, as we mourn together this incredible loss.”

U.S. Senator Mazie K. Hirono (D-HI), an immigrant born in Japan who was the first Asian and Japanese American woman to serve in the United States Senate, met with Prime Minister Abe several times, most recently on a Congressional Delegation trip to Japan in 2017. In 2016, she joined Prime Minister Abe and President Barack Obama for a wreath laying at Pearl Harbor to commemorate the 75th anniversary of the attack on Pearl Harbor.

“This senseless murder was a barbaric act — and one that I condemn in the strongest terms possible,” she said.

“Prime Minister Abe was a transformational figure in Japan who dedicated his life in service of his country,” she added. “A friend to the United States, Prime Minister Abe fought for the Japanese people and strengthened the relationship between our two countries.

The NPR article also states that the assassination could change the way Japanese politicians campaign in the future by shifting away from the informal gatherings to ones more laden with security.