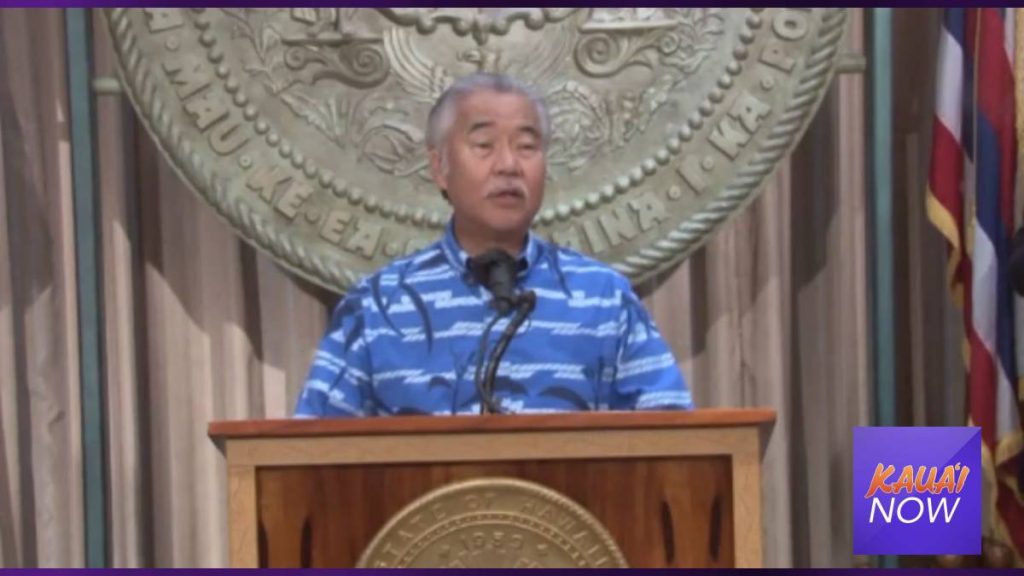 Gov. David Ige on Monday, June 27, informed state lawmakers about his intent to veto several of the measures they passed during the 2022 state legislative session.

Ige, during a news conference, said he has a list of 30 bills he intends to veto; there were a total of 343 measures passed this year by the state Legislature. He has until July 12 to make a final decision on whether he will veto them or allow them to become law.

Putting a measure on the list does not mean he will veto it, but Ige cannot veto any bill not included on the list or that he did not notify the Legislature about. The list provides a guidepost for which measures could be vetoed.

The governor said several factors went into his decision on the 30 measures in question, including legal considerations, program effectiveness and compliance issues.

There also are two bills on list that could contain line item vetoes for specific appropriations, including overappropriation of federal funds: House Bill 1600, which relates to the state budget, and Senate Bill 2076 relating to broadband service infrastructure.

“In addition, we must operate within the federal maintenance of effort requirements contained in the American Rescue Plan Act. This requires that we maintain proportionate spending for public education and the University of Hawaiʻi.”

One of the bills Ige specifically mentioned during the news conference is SB3089, which amends the emergency powers of the governor.

“This bill interferes with the governor’s duties and legal obligations to provide for the public health, safety and welfare by limited the ability to determine the duration of an emergency,” Ige said. “Hawaiʻi led the country in our pandemic response, in no small part because of the process we have in place — the way the counties and state and federal partners work together to keep our community safe. Importantly, the counties lead our emergency management activities and they are supported by state and federal government.”

The governor said SB3089 would delay county emergency response by forcing mayors to wait to get approval before they could issue emergency proclamations and also jeopardize counties’ ability to get disaster relief funds.

He said when responding to a question from the media that the focus of emergency response should be county driven. The concern he heard from the state’s counties is that SB3089 would require prior approval from the governor before mayors could take emergency actions they think are necessary, especially during times of natural disaster.

He and his staff continue to go through the measure and get advice from legal experts. He also understands why one chief executive would not want to have to seek approval from another executive to take action they think is important and necessary to keep their community safe.

“As seen with the pandemic, having the flexibility to issue emergency proclamations to maintain the safety of our community was pivotal for the state of Hawaiʻi,” Ige said.

“This bill would jeopardize our state’s move to renewable energy,” the governor said. “My office received 1,600 communications in opposition to the comments of this bill, which I believe speaks to the passion that we all have here in Hawai’i for renewable energy. We shouldn’t waste our time on this kind of legislation if we hope to exist in a clean energy future. For the sake of our state and our children, our commitment has been to self-sufficiency, especially in energy.”

Ige has often stated the state’s goal is to generate 100% of power from renewable, clean energy sources by 2045. Hawaiʻi was first state in nation to make that pledge and more than dozen states have since followed suit.

“This bill would prevent our achieving that goal,” he said Monday. “This bill is not in the people’s best interest. It pits communities, workers and renewable energy technologies against each other.”

Ige said the flaws of SB2510 are too many for him to list, but he highlighted a few.

“The effect of the limitations the bill places on renewable energy could potentially shutdown most projects currently underway,” Ige said. “Some of our counties would automatically be out of compliance right away if this law were it to be enacted.”

As an example, he said the bill would prohibit a project currently out for requests for proposals on Lanaʻi that would take the island to 98% clean, renewable energy use within the next 12-18 months, also reducing the cost of electricity for every family on the island by an average $130 per month.

“Senate Bill 2510 is not guidance, it is a mandate in black and white, but vaguely written, leaving everyone unsure of how to achieve the minimum and maximum percentages,” Ige said. “At a time when most of us feel the effects of rising energy costs directly in our pockets, we should be encouraging the development of renewable energy. We should not be discouraging the development and investment in energy technologies. This bill will slow our progress towards clean energy goals. It also means many renewable projects in the pipeline now might have to wait until the minimum percentages are met before the could come online. That means families and businesses who have been waiting to lower their electricity bills might have to keep waiting, which could be years.”

He added that the bill’s definition of firm energy ignores and would undermine future innovative combinations of technology, such as a West Kauaʻi energy project that provides power from solar and hydroelectric sources.

HB2424 would expand the investigative authority of the state Department of Human Services for families receiving adoption or permanency assistance funds from the state. It, too, is on Ige’s intended veto list.

“Let me be very clear. I strongly support the intent of this bill, which is to give more resources and authority to our Child Welfare Services division to ensure that our keiki are safe,” Ige said. “As a community, we have an obligation to every child to provide a safe, stable and loving home. However, this bill has serious legal concerns.”

The governor said the measure requires monitoring and surveillance of all families who have adopted or taken guardianship of former foster children, essentially making it so those families can never live free of government intrusion in their lives, “a right which all other families often take for granted.”

“Although the trauma experienced by the community over the loss of a former foster child is real and cannot be dismissed, the solution cannot be to violate the constitutional privacy rights and basic dignity of every family that has taken in and provided love and stability to a former foster child,” Ige said.

He added that the expanded authority could also be used by a child’s abusive biological parent to initiate repeated investigations of the child’s new family in an effort to disrupt the child’s adoptive home, preventing them from ever feeling safe and stable in a new home.

The bill also was amended without notice to the public or the opportunity for the public to provide input, including from adoptive families and former foster children. Ige urged legislators to pursue the issue again during their next session to find a better solution to provide a safe environment for children. He also wants to make sure advocates and community members can participate in process.

“I am hopeful that further legislative work will result in a measure that can provide a safe environment for all our children,” the governor said.

Answering a question from the press, Ige said his overall concern about HB2424 is that it tries to legislate a solution to the issue, but creates unintended consequences, one of which is that it would subject all foster parents and those who adopt children to scrutiny for as long as they have children in their homes.

Yes, there are tragic situations that everyone wants to avoid, he’s just not certain the balance represented in HB2424 would get the state to a better place in the care of children.

One measure Ige was asked about Monday by the press that was not included on his intended veto list was HB2024, which deals with the management of Maunakea on the Big Island.

The governor said there certainly are some concerns that have been expressed about the bill, but he did have the opportunity to speak with legislators and advocates about the measure and understands they think a new authority should take responsibility for management of the mauna. He thinks the University of Hawai’i has done a good job, but recognizes some in the community think it’s time for someone else to take on the master lease.

Ige said while HB2024 might not be a perfect solution and there are specific issues that need to be addressed for a new authority to be successful, he looks forward to working with the Legislature to appoint members to the new board who are the best for the job while continuing to support astronomy and moving forward with the best way to manage Maunakea.

Other bills included on Ige’s possible veto list that he spoke about during Monday’s news conference include:

The state Constitution requires a vote by two-thirds of the members of both chambers of the state Legislature to override a veto. The Legislature can convene before noon Tuesday, July 12, to act on any such bill returned by the governor.

According to the press release that included Saiki’s statement, any measure passed during the 2022 legislative session that has not been signed or vetoed by Ige on July 12 will become law with or without his signature.

Ige also announced Monday that he recently signed 105 more bills into law, bringing the total number he’s signed so far this year to 220.