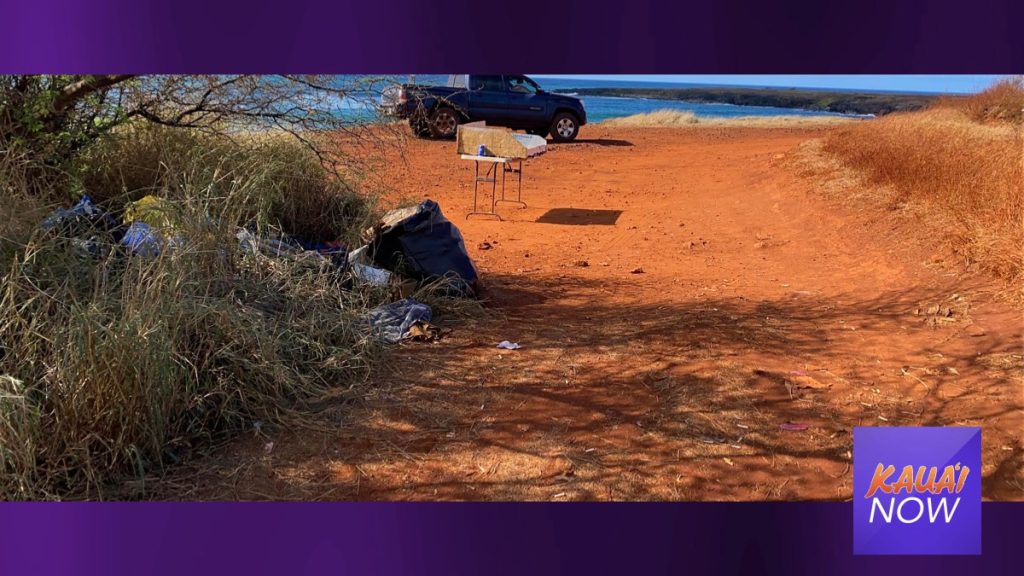 In late April, a joint effort between Hawai‘i Department of Transportation, Department of Land and Natural Resources and Kaua‘i police dismantled numerous houseless encampments and removed nearly 20 tons of rubbish from the southeast end of the airport perimeter road at Salt Pond.

This included mixed metals, hazardous materials, 53 tires, and 18 abandoned vehicles, many of which have yet to be removed.

And while boulders were strategically placed to block vehicular access to mitigate illegal dumping on one end of the road, one former camper agreed that the clean-up effort exacerbated illegal dumping on the adjacent under-developed coastline between the Hanapepe Refuse Transfer Station and the airfield.

“Not only were we forced to move from that land, but we also now have to find ways to pay for legal camping on the state side of Salt Pond Beach,” said Kekoa who does not want to be identified by his last name but stated, “Kekoa in Hawaiian means, ‘the brave one.’”

“It’s a shame,” Kekoa said, adding, “I was always taught to pack out what you packed in.”

KPD officials are aware of the illegal dumping.

“However, since these areas fall within their (DLNR and HDOT) jurisdiction(s), they take the lead and we operate in a supporting role,” stated KPD.

And while the beach and hillside bluffs are still open to pedestrians, HDOT emphasized in an email exchange, “Blocking vehicular access, for the time being, is necessary to slow the illegal dumping and keep our natural coastline healthy.”

Kauai residents also do their part to protect the aina. The county works with volunteers and groups to provide oversight and supplies to clean up illegal dumping. However, Kaua‘i Recycles sites can also be adopted by groups or businesses that want to provide ongoing cleanup.

The Kaua‘i Recycles Drop Bins are for residential use and are available island-wide at eight locations. To find out if land parcels are owned by the state, county, or privately, check on the Public Land Trust Information System at https://pltis.hawaii.gov/.

To request County assistance for community clean-up projects, fill out the “Request for Waiver of Tipping Fees for Illegal Dump Remediation – Fillable Form (effective 2021-03-02)” and submit it to cohdem@co.hawaii.hi.us.