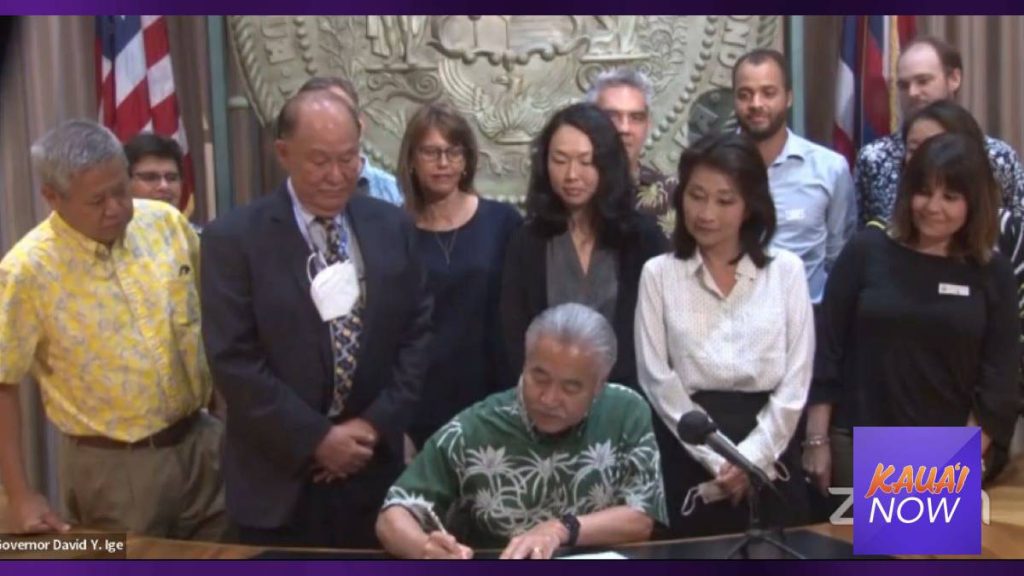 Ige signed House Bill 2510, regarding the state’s minimum wage, and Senate Bill 514, dealing with refunds to the state’s taxpayers, during a live ceremony at the state Capitol in Honolulu.

“I’m excited to be able to sign two bills that are really focused on helping working families and the people who need the help the most,” Ige said during the ceremony, adding that he appreciates the commitment and leadership of legislators to support the state’s most vulnerable residents in a real way.

The governor said the state’s families have experienced many challenges during the COVID-19 pandemic, never imagining the demands and burdens they would face as the pandemic wore on.

“I do believe that the measures we’re signing today can make a significant impact and help families in a tangible way, especially our working families,” Ige said.

The last increase to the state’s minimum wage was in 2018, when it was raised to the current $10.10 per hour thanks to legislation approved in 2014. Ige said Wednesday that another increase was long overdue. About 190,000 workers in Hawai‘i earn minimum wage.

“So raising the minimum wage will be helping those individuals earn more income so they can pay for essentials — food, housing, shelter and other necessary expenses,” the governor said.

He also expects to see boost in state’s overall economy because of the increase, saying many of those who earn minimum wage are living paycheck to paycheck and will certainly be spending the additional funds they make from the increase, putting them back into the economy, which will also help create more jobs.

“This will increase income for working families and lead to greater stability in the workforce,” Ige said during the signing ceremony about the earned income tax credit move. “This is also much needed support for our community.”

“This is a happy day for me, as we are finally able to put in place increases to our minimum wage after four years of effort,” said state Sen. Brian Taniguchi, who spoke Wednesday during the signing ceremony. He added after thanking the many people involved in getting the measure passed, “Let’s all celebrate this great bill.”

Rep. Sylvia Luke also spoke during the ceremony and thanked everyone who patiently worked on the minimum wage issue for many years. She said coupling an increase to minimum wage with changes to the earned income tax credit is fundamental to helping the state’s working families.

“And to make (the earned income tax credit) refundable and to make it permanent, it provides hope for many of the people who are working to just make ends meet,” Luke said.

The state Department of Taxation anticipates it will begin issuing the tax refunds during the last week of August and will provide additional details in the coming days.

“I’m glad that we are able to return dollars to taxpayers to pay for things like gas and other necessities that are increasing in price,” Ige said Wednesday. “We do know that this measure will put funds directly into the pockets of our residents and certainly will help go a long way.”

“I think both of those investments are really helping to ensure that we, as policymakers, can fulfill our promises to the public servants and many in our community that certainly rely on government services, especially during these emergency times,” Ige said.

The last time the state gave a rebate to taxpayers was in 2009 — a “whopping” $1 for every exemption, Luke said Wednesday. Ige proposed a tax refund in his 2022 State of the State address earlier this year because of strong revenue projections, and the state Legislature was able to increase that amount.

Luke said she and Ige discussed possible tax rebates throughout this year’s state legislative session and he agreed that if there was an opportunity for legislators to do more for the hardworking people of the state, they should.

Luke added that combining an increase in minimum wage, making the earned income tax credit refundable and permanent and giving tax rebates will allow the state to not just take care of working families this year, but for the future as well.

“At the start of the 2022 legislative session, we made a commitment to support programs and policies that would help our residents get back on their feet,” Ige said in a press release after the bill signing ceremony Wednesday. “Both bills represent a collaborative effort to bring the people of Hawaiʻi some relief as we continue to recover from the two-year pandemic.”

“Thank you to the governor and our legislators for putting the people first,” Jhoe Rosales, who earns the current state minimum wage of $10.10 per hour, said in a a joint press release from the Raise Up Hawaiʻi and Hawaiʻi Tax Fairness coalitions. “This law will help my family make ends meet here in Hawaiʻi by helping us to pay for our rent, food and other necessities.”

Officials with other organizations in the state agreed the measures are a step in the right direction but said more is needed.

“This historic legislation represents a significant and meaningful step toward transforming our economy so that it works for everyone, but much more remains to be done,” Gavin Thornton, Hawaiʻi Appleseed Center for Law and Economic Justice executive director, said in the joint press release from Raise Up Hawaiʻi and Hawaiʻi Tax Fairness coalitions.

At $10.10 an hour, or just $21,000 per year, a Hawaiʻi resident with no dependents making minimum wage, who is provided employee-sponsored health insurance, would need to work roughly 114 hours per week — three full time jobs — to afford a one-bedroom apartment, according to the press release. At $18 an hour, that same minimum wage worker would need to work 62 hours per week.

“The state should continue to advance legislation that moves us closer to a true living wage for all workers by continuing to raise the minimum wage beyond 2028,” Nate Hix, director of Living Wage Hawaiʻi, said in the joint press release. “If we can do that, and end the shortage of affordable housing, we can strengthen the working class that is the backbone of Hawaiʻi’s economy.”

“Research consistently shows that, when families can afford to pay for their basic needs, the benefits reach deep within our society,” Nicole Woo, director of research and economic policy at Hawaiʻi Children’s Action Network, added in the joint press release.

She said that beyond the proven economic benefits, the bills signed into law by Ige on Wednesday will help reduce poverty and inequality in the state, improving health outcomes and educational attainment for children in working families.