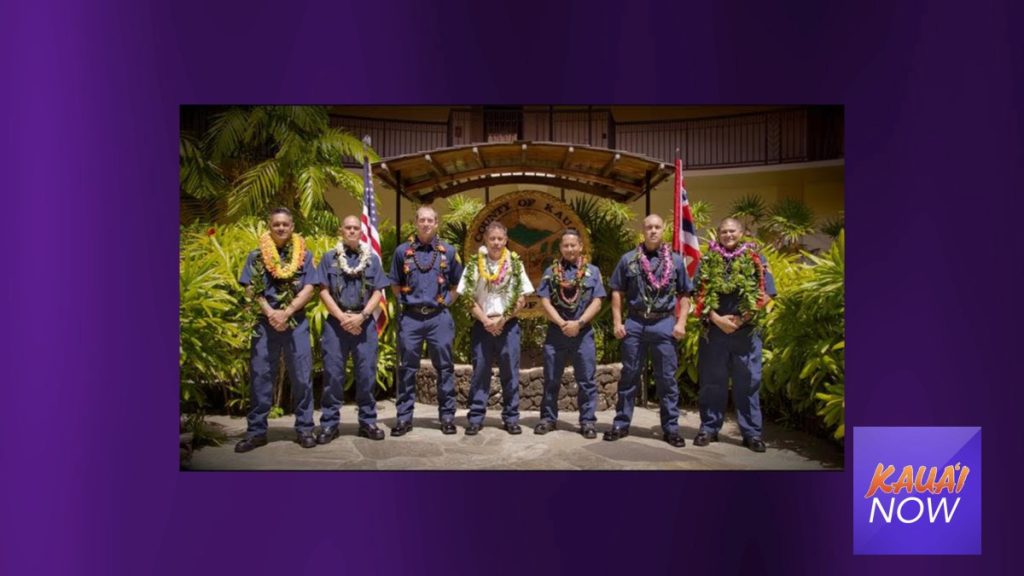 KFD Chief Steven Goble addressed the eight firefighters in front of a crowd of family, friends, supporters, and dignitaries.

“We thank all of you who accepted the challenge to contribute to the future success of the Kaua‘i Fire Department,” Goble said. “Always remember that we set the bar high. We know that you are capable of maintaining the tradition of high standards. Remember who you are, remember what this department stands for, and remember the people who came before you and ensure that you honor them as well.”

“We would like to recognize the families for enduring the time and sacrifice when they are apart from these men when they are serving our community,” said Deputy Chief Gibson. “We thank all of these men for their professionalism, dedication to their craft, and continuing to work hard and challenge themselves, which makes this truly an outstanding organization.”

Managing Director Michael Dahilig, who spoke at Friday’s ceremony, represented the Office of the Mayor.
“Promotions are benchmarks measuring the culmination of hard work to a point,” said Managing Director Dahilig. “It’s a gauge that confirms excellence and growth, exemplifying devotion, improvement, and the pursuit of new knowledge. It’s recognition that you are not satisfied, and your desire for self-betterment, but more importantly, higher service is your calling – it’s your life quest.”

Battalion Chief Bryan Doo has 21 years of service with the Kaua‘i Fire Department. Bryan would first like to thank his wife and children for all their support and patience; his parents and siblings for always being there and helping with his children when duty calls. And he would also like to thank all of his former crew members who helped shape the firefighter he is today and provided some good times. He is very humbled by the opportunity to serve in his new role and is excited for what the future of the department holds. Mahalo.

Fire Captain Kekoa Dizol was born and raised on Kaua‘I and currently resides in Kōloa with his family. Kekoa joined the Kaua‘i Fire Department in 2005, with RECRUIT CLASS 17. He worked as a Firefighter I for nine years under various Captains. Kekoa moved up in ranks as a Hazmat Specialist for three years under Captain Jim Reid, and as an Operator for another three years under Captain Jeremy Makepa. Kekoa was promoted to Captain in September of 2021 and works at the Kalāheo Fire Station. Kekoa would first like to thank his wife and kids for their patience and support throughout his career. He would like to thank Chief Goble, Deputy Chief Gibson, the Battalion Chiefs, and all his peers in the Fire Department that helped him reach his career goals. Because without them, none of this would be possible. And lastly, Kekoa would like to thank all his brothers that worked with him on Kōloa Blue a.k.a the “Shipwrecks Crew.”

Fire Captain Nicholas Pananganan is a graduate of Kapa‘a High School, Class of 2001. He received an AA degree from Kaua‘i Community College. The County of Kaua‘i Fire Department hired Nicholas in November 2005 Recruit Class 17. Nicholas was promoted to Fire Captain in November 2021. His previous assignment was Fire Fighter III, Waimea Green, under Captain Sean Kitamura. Nicholas would like to thank all his former Company officers and mentors that he’s had the privilege to work for and learn from while under their command, all of his fellow peers he’s had the pleasure to work alongside as firefighters and his fellow members of Recruit Class 17 – for being the best in the business. Nicholas thanks his wife, Keiko Sagawa-Pananganan, who bought his first suit for his interview, and for always believing in him – his son Kymane, daughters Kyana and Kylia for being the blessings he counts on every day. Also, he thanks his close friends and family for their love and support. In his words, “Thank you to my parents, Edward and Jane Pananganan, for always being there, and to my brother, Fire Fighter III Pono Pananganan, who encouraged me to take the entrance exam.

Fire Fighter III Elijah Frank has been with the Kaua‘i Fire Department for 13 years. When he first got hired, he and his beautiful wife Kaleo moved back to Kaua‘i from O‘ahu with their one-year-old son Keale. Elijah is grateful for his experiences working for the Kaua’i Fire Department. One of the times he is most grateful for was during and after the flood of 2018. He and his family were able to get through this disaster partly because of the kindness, generosity, and hard work of his fellow firefighters and their families. Elijah would like to thank his fellow firefighters, captains, and chiefs for being there for him and his family during those tough times. Elijah also wanted to thank his wife Kaleo and his four amazing children, Keale, Po’iwena, Ha’ehunalu, and Pauweaka for their love and support. Keale, now 14, likes to sail Hawaiian double-hull canoe and surf. Po’iwena 11 likes to paddle and steer a 6-man canoe and Snap Chat with her friends. Ehu, 9, likes to skate and surf and is an amazing helper to his 5-month-old baby brother Pauweaka. Dad is very proud of all of you. He also wants to give a very special mahalo to his wife for holding down the house every day and keeping their family strong, well-fed, and together.

Fire Fighter III Travis Miyazaki was born and raised on Kaua‘i’s south shore and currently resides in Lāwa‘i with his wife, Jana, and daughter, Malie. He joined the Kaua‘i Fire Department in August 2015 with Recruit Class 26. He would like to thank all the firefighters and officers he has had the opportunity to work with and those who have invested their time in him. Most importantly, he would like to thank his wife, daughter, and family for their support and sacrifice in allowing him to serve. Firefighter 3 Miyazaki started his promotional assignment at Kaua‘i Fire Department’s Training Bureau under the command of Capt. Jeremy Cole.

Fire Fighter III Joshua Peralta was born and raised on the Westside of Kaua‘i in Kekaha and now lives in Kapa‘a. Joshua has been a part of the Kaua‘i Fire Department for over 10 years. He would like to thank everyone at KFD past and present for all the knowledge and skills that has been passed on to him. Josh would like to also thank his family and friends for all their love and support, especially his wife, Darian, and daughter Aubree. Joshua started his promotion as a member of the Training Bureau, under the command of Captain Jeremy Cole.

Fire Fighter III Kawaihoola Curnan has been a part of the Kaua‘i Fire Department for nine years. He is a graduate of St. Louis High School. He is the son of Marty and Corinne Curnan. He is married to his wife Dana and has five children: Haweo, Halia, No’eau, Lilinoe, and Hulali. Kawaihoola would like to thank his family for their love and support.

Firefighter Teves had a family event planned prior to today’s event being scheduled – We would like to recognize Karl for his achievement and to accept our apologies for scheduling this ceremony on relatively short notice.