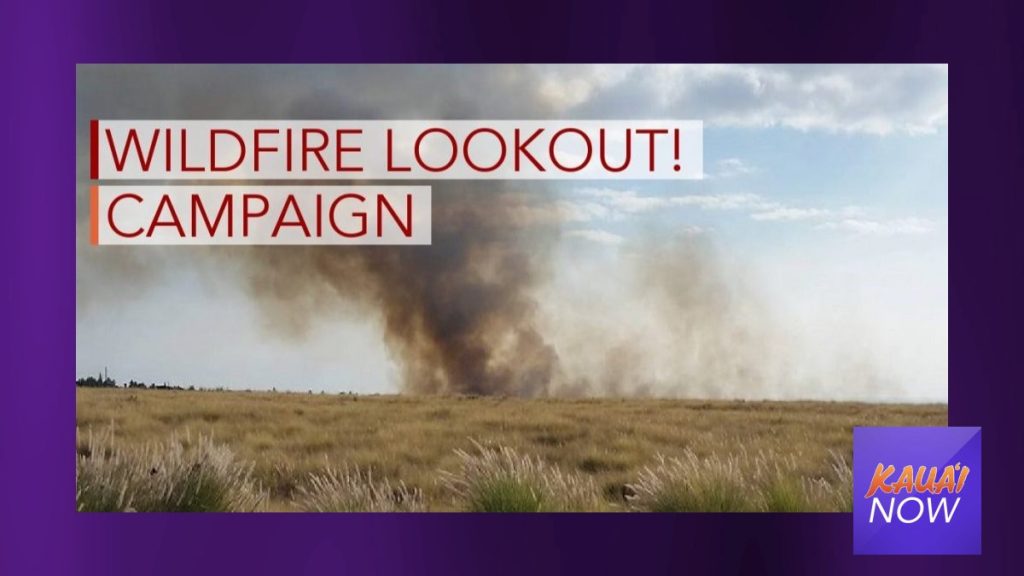 State officials are warning Hawaii residents to prepare themselves for upcoming wildfires this summer as drought conditions are expected to worsen.

The annual Wildfire and Drought LOOKOUT! awareness campaign, hosted by the Hawai‘i Wildfire Management Organization, or HWMO, was announced during a press conference on Tuesday. The presser was held in Mariner’s Cove/Kamilo Nui community, East O‘ahu to highlight the neighborhood’s national recognition as a Firewise USA® community and its ongoing participation in the Hawaiʻi-Firewise program led by HWMO in partnership with DOFAW.

Honolulu Fire Department Inspector Carl Otsuka commended community members for instituting many of the protective steps, outlined by HFD and HWMO through the Hawaiʻi-Firewise program.

“To protect their properties and their community they’ve created fire breaks near structures, are keeping their rain gutters clear of debris and keeping trees and vegetation cut back,” Otsuka commented.

During the press conference, a meteorologist, a fire scientist, a fire manager, and a fire inspector also shared current and predicted Hawai‘i drought conditions, the seasonal fire outlook, and what everyone can do to prevent wildland fires.

“Recent rainfall has provided some benefit for leeward Kaua‘i and O‘ahu, but moderate to extreme drought covers large portions of O‘ahu, Maui County, and the Big Island,” said National Weather Service meteorologist Derek Wroe. “As people know, we are heading into the hotter and drier summer months, and projections call for rainfall to be below normal. As a result, drought will likely expand and worsen over the fire-prone leeward areas. These drier than normal conditions may linger into the beginning of the normal wet season in October and November.”

“As people know, we’re heading into the much dryer, hotter summer months, so there’s no reason to expect any relief from the drought. We do expect the percentage of land in the extreme to exceptional drought categories to grow,” Wroe said.

Drought and wildfire conditions were evident from last week’s three-acre Kuaokalā Guarantee Fire on O‘ahu. It burned hot and fast before wildland firefighters from the DLNR Division of Forestry and Wildlife put it out.

“In this same area, we’ve had four or more fire starts from unextinguished campfires. This forest and many others around the state are bone dry and getting dryer by the day,” he explained.

Forest users are reminded that ground fires are always strictly prohibited on lands managed by DOFAW, which include State Forest Reserves and Natural Area Reserves. Campfires must be in a container such as in a barbeque grill or metal drum. All embers must be extinguished when the fire is unattended.

“We recommend campers and hikers carry extra water and fire extinguishers in their vehicles when in forested or vegetated areas, especially during dry, windy summer months,” Walker added.

Walker noted that while DOFAW has primary fire suppression responsibility on State lands under its jurisdiction, initial response and firefighting is often shared with county fire departments.

Another linkage between drought and fire, noted by Otsuka, is all the water from municipal fire hydrants is potable water. The more firefighters need, the less drinking water will be available which could lead to non-voluntary water restrictions if drought conditions worsen.

Most wildfires in Hawai‘i tend to be smaller in size when compared with other western states, said Clay Trauernicht, an Ecosystems and Fire Extension Specialist at the University of Hawai‘i
Department of Natural Resources and Environmental Management.

“However, most years, as a percentage of land area, Hawai‘i loses as much acreage to fire as all the large states on the West Coast and in the Western U.S.,” Trauernicht said. “Fortunately, there is a lot we can do to protect our people and places from wildfire. We just all need to take preparedness action.”