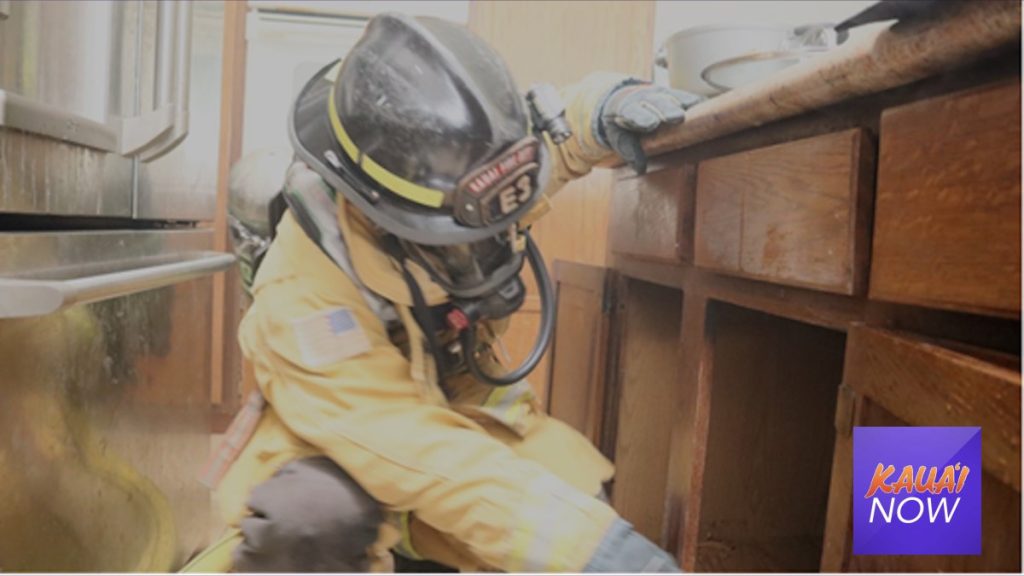 Firefighters extinguished two structure fires on Monday – one at a condo unit in Princeville and one at a residence in Wailua.

A female was treated for possible smoke inhalation from the Princeville fire, and a firefighter incurred minor facial injuries from the Wailua fire.

According to a preliminary report, firefighters were dispatched to the Club Wyndham Bali Hai Villas on Pepelani Loop in Princeville at approximately 9:45 a.m. on Monday.

According to a preliminary report, upon arrival at approximately 9:50 a.m., fire personnel discovered light smoke originating from a condo complex. As crews cleared the units of occupants and ensured electricity was shut off to the entire building, they entered the unit and encountered heavy smoke in the kitchen area but saw no visible flames.

Later, KFD personnel found the fire after opening the walls with hand tools. After deploying a ventilation fan to clear the smoke, firefighters checked the unit above the fire for potential spread. Fire personnel discovered hot spots and smoke behind the stove and wall socket on the second floor and applied water to the charred areas. Firefighters continued efforts until the fire was fully extinguished.

AMR personnel treated a female from the unit for possible smoke inhalation. She was later released on scene.
Firefighters cleared the scene in Princeville at approximately 12:15 p.m.

Damages to structure and contents are estimated at $110,000.

At approximately 10:20 a.m., KFD personnel were dispatched to a second structure fire, at a residence on Molo Street in Wailua.

Firefighters with the Līhu‘e fire station and the Fire Prevention Bureau responded to the incident.

According to a preliminary report, firefighters arrived on the scene and discovered light smoke in the house. Once inside, first responders moved a kitchen appliance in a cabinet to access the gas shutoff valve.
A brief explosion then occurred, setting fire to the kitchen appliance and gas line. Firefighters proceeded to fully turn off power to the house and disconnect the gas line. After KFD personnel extinguished the fire, they removed the cabinet’s contents and discovered charring but no further fire extension.

A firefighter suffered minor facial injuries as a result of the explosion.
Firefighters cleared the scene at approximately 12:50 p.m.

Damages to the Wailua home and its contents are estimated at $6,000.

The fire is under investigation.

According to the KFD Fire Prevention Bureau, if you smell propane in your home, get everyone outside, call 911, and shut off the fuel line outside of your home if safe to do so.

For information on making your kitchen safe from fire hazards, visit https://www.nfpa.org/Public-Education/Fire-causes-and-risks/Top-fire-causes/Cooking.