Outlook Is For 2-4 Tropical Cyclones During 2022 Hurricane Season 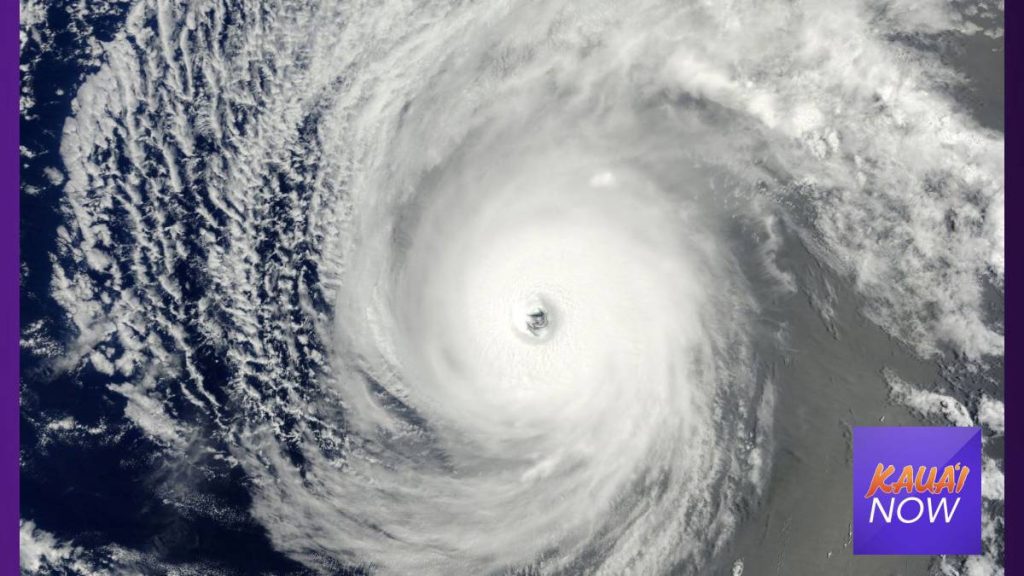 This year marks the 30th anniversary of Hurricane Iniki making landfall on Kaua‘i as a major hurricane, devastating the Garden Isle. And while the outlook for the 2022 hurricane season in the Central Pacific, which begins June 1, is for below average tropical cyclone activity, officials warn it only takes one hurricane or tropical storm to cause a tremendous amount of damage.

“Those residents who experienced the impacts from Hurricane Iniki still remember those experiences today — the incredible destructive power that it brought to their island,” Christopher Brenchley, director of the National Weather Service Central Pacific Hurricane Center, said Wednesday, May 18, during the annual hurricane season outlook presentation and media briefing.

The outlook for the 2022 hurricane season is for 2-4 tropical cyclones, which includes tropical depressions and named storms and hurricanes. Brenchley’s presentation during Wednesday’s event included a handout that showed there is a 60% chance for a below normal season, 30% chance for normal tropical activity and just a 10% chance for an above normal season.

Brenchley noted, however, that the outlook is not a forecast for hurricane landfalls in the islands.

“The outlook doesn’t necessarily pinpoint where those tropical cyclones might occur,” he said. “It only takes one wandering into the vicinity of the state to cause a tremendous amount of potential impact.”

“Wind shear is something that hurricanes don’t do well with,” he said. “They tend to weaken significantly and shear apart.”

The same has been true for the past several hurricane seasons, and Brenchley said that is expected to continue in 2022. The cooler water temperatures and wind shear are the main reasons why tropical cyclone activity in the Central Pacific is predicted to again be below average this year.

The continuation of La Niña conditions will also result in dryer than average rainfall conditions throughout the state this summer, according to NWS senior hydrologist Kevin Kodama, who also spoke during Wednesday’s outlook presentation.

“With the potential for a third year of La Niña conditions, that would mark only the third time in last 50 years that we’ve had three La Niñas in a row,” Kodama said. “So with the forecast of below average rainfall expected for the summer, for the dry season, we can look for the existing drought areas that we already have in place to intensify and expand even further.”

The one exception is Kaua‘i.

“They have the least amount of drought going on right now, and if you look outside or you look at the weather forecast for this week, they could get significant rainfall,” Kodama said. “So that drought could go away by the end of this week. But we’re looking at them to dry out as we go forward, so maybe later in the summer they’re going to be in just as bad shape as the rest of the state.”

The dryer than normal conditions will have a significant impact on the agriculture sector, especially for non-irrigated interests, including the ranching community. It also means the wildfire season could peak earlier than normal.

“Usually, the peak of the wildfire season is somewhere in late July to early August, and we’re looking to move that forward by a month or two,” Kodama said, adding the state could start to see significant dryness and the potential for wildfire ignitions by June.

Even the windward sides of the islands will be overall dryer than normal and could see some moderate to severe drought in isolated areas, impacting mainly those who use water catchment and on water supplies that use surface water as their sources. Less rainfall also means some windward areas could have more potential for wildfires.

For leeward areas of the state, which are “already pretty crispy,” according to Kodama when responding to a question from the media, conditions are expected to worsen as the season progresses. However, the leeward areas of the Big Island look to have a pretty normal summer.

Kodama said the Kona slopes are a unique from other leeward areas of the state because they experience their rainy season during the summer. The past few summers have been wet ones for the area, in fact at times too wet, he said. And with sea surface temperatures not being excessively warm this year, Kodama expects leeward Big Island to have a near normal wet season.

Hurricane season outlooks are produced by the Central Pacific Hurricane Center in coordination with the NWS Climate Prediction Center. Both are part of the National Oceanic and Atmospheric Administration. The Central Pacific outlook does not include predictions for the number of storms that could develop in the Eastern Pacific and Atlantic. Those will be released next Tuesday, May 24.

The 2021 outlook called for a slightly higher number of possible storms, 2-5, and the Central Pacific only ended up seeing only one verified tropical cyclone. But while it was a quiet year, the remnants of former Hurricane Linda moved into the state last summer and brought with it rains and gusty winds for some areas.

“So even with a quiet year, there’s always a possibility of getting some activity,” Brenchley said during Wednesday’s event.

That was the main message of Wednesday’s event — no matter how many tropical cyclones an outlook calls for, there’s always the possibility one could affect the islands. Even storms that don’t directly strike the state can have major impacts, such as what happened in 2018 when Hurricane Lane dumped 50-plus inches of rain on the Big Island’s east side throughout several days as it passed to the south.

Brenchley said the outlook does more than just lay out how many storms could happen in a season. The goal is to get the message out — “to get vital information to the public so they can be prepared and ready for a possible hurricane,” he said.

“The best time to prepare is yesterday,” Brenchley said. “The next best time is today.”

And preparation is paramount.

“Throughout the state of Hawai‘i, we must take note that the possibility of a hurricane in these islands is real,” Brenchley said in a press release issued Wednesday following the live and online outlook presentation. “Heed the advice of public safety officials. Make a preparedness plan and communicate it to your friends and family. Together, we can make our communities more weather ready and resilient.”

For those interested in learning more about how the handbook can help you prepare for the upcoming hurricane season, the Hawai‘i State Public Library System will present a free online event from 10-11 a.m. Friday, May 27. The webinar will cover topics such as what you need for emergency supplies, emergency/evacuation planning and strengthening your house to reduce the risk of hurricane damage.

Free copies of the handbook are available at all of the state’s public libraries, while supplies last.

Registration is required to attend the online event. To register, click here.