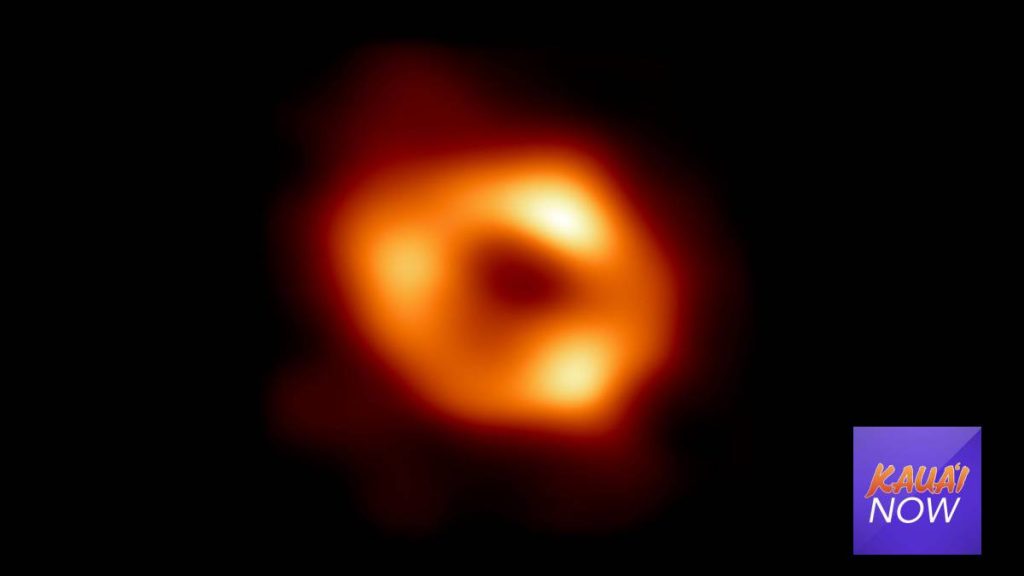 The world now has an image of the giant occupying the darkness at the center of the Milky Way thanks to a collaborative effort among more than 300 researchers from 80 institutes around the globe, including 11 observatories, two of which are on the Big Island.

Astronomers on Thursday, May 12, unveiled the first image of the supermassive black hole at the center of our galaxy, dubbed Sagittarius A*, or Sgr A*, pronounced “sadge-ay-star.” The image was produced by the Event Horizon Telescope Collaboration. The James Clerk Maxwell Telescope and Submillimeter Array atop Maunakea are part of that team.

The Event Horizon Telescope is the same global research team that in 2019 provided the first-ever image of a black hole, Pōwehi, also called M87*, which sits at the center of a galaxy called Messier 87. The two black holes look remarkably similar, despite Sgr A* being more than a thousand times smaller and less massive than Pōwehi.

“We have two completely different types of galaxies and two very different black hole masses, but close to the edge of these black holes they look amazingly similar,” Sera Markoff, co-chairperson of the Event Horizon Telescope Science Council and a professor of theoretical astrophysics at the University of Amsterdam, the Netherlands, said in the press release. “This tells us that general relativity governs these objects up close, and any differences we see further away must be due to differences in the material that surrounds the black holes.”

The Event Horizon Telescope team’s results were published Thursday in a special issue of The Astrophysical Journal Letters.

Sgr A* can’t be seen by the naked eye because it is completely dark. But glowing gas around it reveals the tell-tale signs of a black hole: a dark central region surrounded by a bright ring-like structure. The new image captured light bent around the black hole by its powerful gravity.

“We were stunned by how well the size of the ring agreed with predictions from Einstein’s Theory of General Relativity,” Geoffrey Bower, an Event Horizon Telescope project scientist and chief scientist for Hawai‘i operations for Academia Sinica Institute of Astronomy and Astrophysics in Taipei, said in the press release. Bower works at the Submillimeter Array on Maunakea. “These unprecedented observations have greatly improved our understanding of what happens at the very center of our galaxy and offer new insights on how these giant black holes interact with their surroundings.”

The new image plus that of Pōwehi provide conclusive demonstrations that black holes sit at the center of galaxies, Bower said Thursday in an email to Kaua‘i Now.

“The first result wasn’t an error,” he said. “So, we think we can say that every galaxy has one of these beasts at its center. And those black holes control how the galaxy grows and evolves.”

“Sir Isaac Newton came up with the initial theory of gravity, which Albert Einstein expanded on to build the General Theory of Relativity,” Parsons said Thursday in an email to Kaua‘i Now. “This theory predicts the apparent bending of light caused by massive objects in our universe — and to test these theories we need massive objects.”

Pōwehi and Sgr A* are definitely massive objects. Pōwehi has a mass 6.5 billion times the mass of the sun while Sgr A* is about 4 million times more massive than the sun.

“We have images for two black holes — one at the large end and one at the small end of supermassive black holes in the universe — so we can go a lot further in testing how gravity behaves in these extreme environments than ever before,” Keiichi Asada, an Event Horizon Telescope scientist from the Institute of Astronomy and Astrophysics at Academia Sinica, said in the press release.

Sgr A* is the closest supermassive black hole to Earth. It’s about 27,000 light-years away.

“That means we know much more about it than any other black hole,” Bower said in his email. “In particular, we know its mass and distance very accurately from the observations of stars orbiting the black hole. That mass and distance tell us exactly what size of the ring to expect. Any deviation from that size would reveal a flaw in Einstein’s theory of relativity.”

“From observing these two black holes we get to test our theories of gravity under two mass limits — and that’s exciting,” Parsons said in her email. “And the result: Einstein’s theory holds up.”

She added that comparing the two black holes also provides a way to learn more about how black holes grow and how they feedback into their environment.

“Sgr A* and M87* are very different in this regard,” Parsons said in her email. “M87* blasts a powerful jet that escapes from its galaxy. Sgr A* is on a starvation diet and is sitting very quietly in our galactic center.”

Scientists are particularly excited to have images of two black holes of very different sizes, giving them the chance to understand how the two celestial objects compare and contrast. The new data is also being used to test theories and models of how gas behaves around supermassive black holes, a process thought to be a key in the formation and evolution of galaxies.

“Now we can study the differences between these two supermassive black holes to gain valuable new clues about how this important process works,” Asada said in the press release.

Astronomers have pointed their telescopes toward the center of the Milky Way since 1610 when Galileo Galilei pointed his telescope to the heavens, Parsons said in her email. The first image taken at radio wavelengths was in 1974. The James Clerk Maxwell Telescope’s involvement in such work stretches back 15 years.

“But Hawai‘i’s involvement in studying the black hole at the center of our Milky Way galaxy has been an even longer love affair,” Parsons said in her email.

As an example, she pointed out that Andrea Ghez used decades of data from W.M. Keck Observatory on Maunakea to examine orbits of stars around an invisible but massive compact object at the galaxy’s center, now recognized as a black hole, earning her a Nobel Prize in Physics in 2020, together with Reinhard Genzel and Roger Penrose.

“To now have an actual image of that same black hole is incredible, and what is most exciting: this is in our home galaxy, the Milky Way,” Parsons said in her email.

Sgr A* was actually discovered almost 50 years ago, Bower said in his email, and astronomers realized about 20 years ago that they might be able to see its shadow, leading to the creation of the Event Horizon Telescope.

“The images that we are showing were obtained from two nights in April 2017,” he said. “In each night, eight telescopes collected about 12 hours of data. I was part of the team supporting observations with the (James Clerk Maxwell Telescope) and the (Submillimeter Array).”

And it wasn’t easy.

“Sgr A* was much more difficult to observe, and that’s due to a couple of things,” Parsons said in her email, adding while Sgr A* is closer to Earth than Pōwehi, a clear view of the black hole was difficult to obtain.

“When you look up towards the galactic center on a clear night, and indeed at the Milky Way — you’ll notice dark features,” she continued. “These dark features are clouds of gas and dust. These clouds scatter starlight, hiding background stars. Closer into the black hole Sgr A*, it’s similar; there is a cloud of plasma obscuring the black hole, scattering the radio waves, making it hard to observe.”

Because of its smaller size, the clouds of plasma and gas orbit Sgr A* in minutes compared to Pōwehi, where it takes days. Bower said in his email that the orbit time is so short that the team had to compensate for the image changing in a 12-hour observation window.

“We had preliminary results two years ago, but we spent this time testing for all possibilities,” Bower said in his email.

It was “a bit like trying to take a clear picture of a puppy quickly chasing its tail,” Chi-kwan Chan, an Event Horizon Telescope scientist from Steward Observatory and the Department of Astronomy and the Data Science Institute of the University of Arizona, said in the press release.

“Having something that is changing on the order of minutes is challenging,” Parsons said in her email.

The hard work and effort put into the research — not just by astronomers observing the black hole, but also by a host of other observatory staff including engineers, instrumentation scientists, telescope operators and the computer, administration and finance teams — allowed those challenges to be overcome and will hopefully inspire others.

“We know that these results inspire other scientists and the public,” Bower said in his email. “We hope that they give people the inspiration to look up and take in the awe of this amazing universe.”

“This image released today is truly special,” Parsons said in her email.

Not just that. The research also could lead to real-world applications.

“We also work on the cutting edge of technology to carry out these experiments,” Bower said in his email. “Ideas developed with basic science often create great new technical innovations, like wireless technology and the internet. In the case of the (Event Horizon Telescope), we build custom, ultra-sensitive detectors for our telescopes that someday could become commonplace like cellphone cameras. And we build high data rate recorders that could end up in telecommunications.”

He said the team hopes the research can give people a sense of wonder about the universe, which is so vast and contains so much variety, “it’s astonishing.”

“I’ve been studying Sgr A* for nearly 30 years,” Bower said in his email. “I’m so happy to share this image with the world.”

“I hope the everyday person gets a moment to celebrate the achievement of what we, as society, can achieve when we work together,” Parsons said in her email. “I hope this discovery is the wow factor that may inspire future generations of scientists.”

She said some of the hardest questions she gets are from her nieces and nephews on the Big Island.

“Children and young people have such great minds — and to grow up in a time where we now have an actual image of the shadow of a black hole is incredible!” Parsons said in her email. “I look forward to seeing where these future researchers take such studies.”