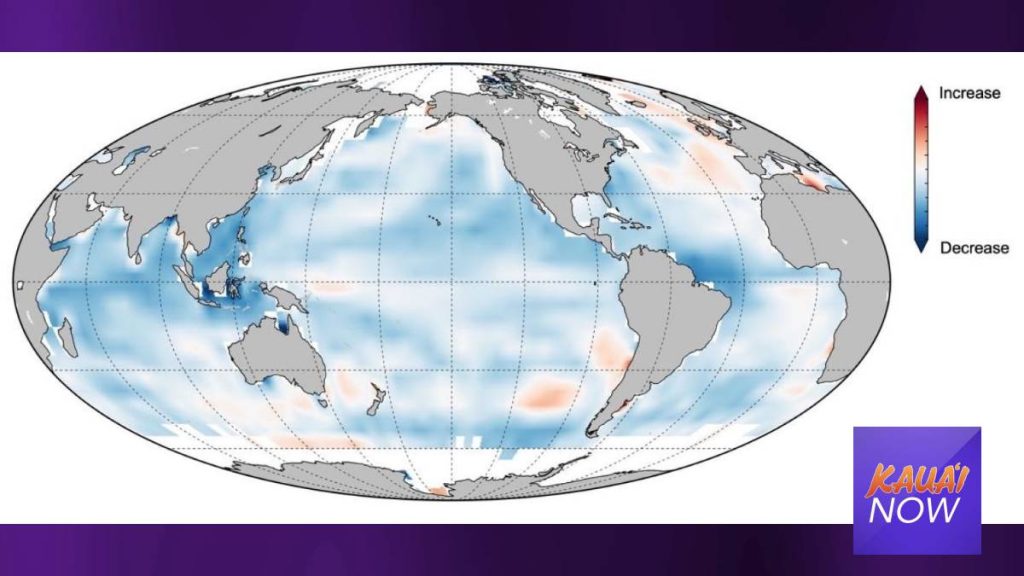 The ocean is suffering from “amnesia” because of climate change, according to a recently published study that was co-authored by a University of Hawai‘i at Mānoa professor.

According to the study, published in Science Advances, the research team made their discovery by assessing future projections from the latest generation of Earth System Models. Across climate models, ocean “memory” decline was found as a collective response to human-induced global warming.

“Reduced ocean memory together with increased random fluctuations suggest intrinsic changes in the system and new challenges in prediction under warming,” Fei-Fei Jin, an atmospheric sciences professor at the UH-Mānoa School of Ocean and Earth Science and Technology and study co-author, said in a UH press release.

Ocean memory is related to the thickness of its uppermost layer, the mixed layer. Deeper mixed layers have greater heat content, which confers more thermal inertia that translates into memory. However, the mixed layer over most oceans will become shallower in response to continued warming, resulting in a decline in ocean memory.

“We discovered this phenomenon by examining the similarity in ocean surface temperature from one year to the next as a simple metric for ocean memory,” Hui Shi, lead author and researcher at the Farallon Institute in Petaluma, Calif., said in the press release. “It’s almost as if the ocean is developing amnesia.”

Compared with the fast weather fluctuations of the atmosphere, the slowly varying ocean exhibits strong persistence, or “memory,” meaning the ocean temperature tomorrow is likely to look a lot like it does today, with only slight changes. As a result, that memory is often used for predicting ocean conditions.

The thinning mixed layer is also found to increase the random fluctuations of sea surface temperature. Although the ocean will not become much more variable from year to year, the fraction of helpful signals for prediction largely reduces.

“In fisheries management, the biological parameters used for stock assessment are estimated assuming a stable environment represented by the recent past,” the press release said. “Reduced ocean memory might render such estimation inaccurate and calls for new approaches in ecosystem-based fisheries management to include real-time ocean monitoring and other efforts alike.”

Ocean memory decline also likely exerts impacts on marine animal and plant life populations. Depending on whether a species is adapted to constant or more variable conditions, future population changes can be better estimated and predicted by taking ocean memory loss into consideration.

Forecasting land temperature and precipitation, as well as extreme events, might also be affected by ocean memory decline.