Local Officials React to Draft Opinion by US Supreme Court That Would Overturn Roe v. Wade 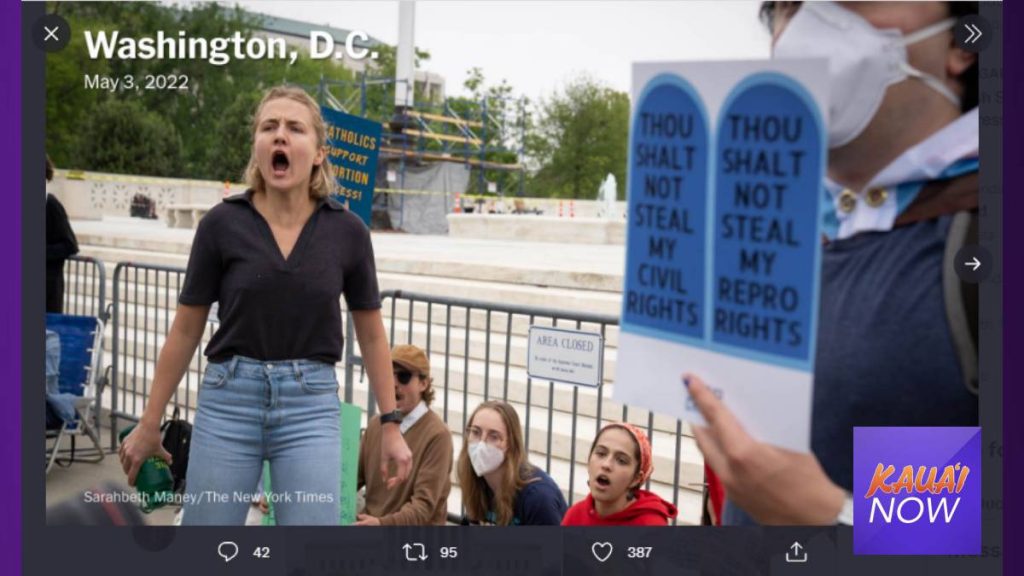 Anger and concern. That’s how public officials throughout Hawai‘i, from the local level to the top of state government, are reacting to a draft opinion of the U.S. Supreme Court that if adopted would overturn the landmark Roe v. Wade abortion rights decision.

“I’m deeply concerned,” Hawai‘i County Councilman Tim Richards told Big Island Now and Kaua‘i Now on Tuesday, May 3, a day after news about the high court’s draft decision was reported by Politico. “I am pro-choice, period. I always have been.”

While it isn’t an official ruling and he hadn’t had a chance to dive into the news about the draft opinion, Richards said he supports a woman’s choice regardless and has known some families who had to make some very tough decisions.

“I am concerned about the impact of not having pro-choice availability,” he said.

Hawai‘i County Mayor Mitch Roth’s spokesman Cyrus Johnasen said Tuesday in an email to Big Island Now and Kaua‘i Now that “for over two decades as a prosecutor in both the City and County of Honolulu and the County of Hawai‘i, Mayor Roth has been a fierce advocate for women’s rights, including the right to choose.”

“I cannot comment on the substance of a draft decision,” Hawai‘i County Corporation Counsel Elizabeth Strance told Big Island Now and Kaua‘i Now in an email Tuesday. “I am deeply troubled, however, that a draft United States Supreme Court opinion was leaked. Whether one agrees or disagrees with a court’s ultimate decision, the privacy of the court’s deliberative process should be inviolate.”

The draft opinion, written by Supreme Court Justice Samuel Alito, is a “full-throated, unflinching repudiation” of the 1973 decision by the high court in the Roe v. Wade case, said the Politico story. It could end 50 years of federal constitutional protection of abortion rights and give states the power to decide whether to restrict or even ban abortion. A subsequent 1992 decision largely maintained the right.

Alito called the Roe v. Wade ruling “egregiously wrong from the start” in the draft, labeled as the “Opinion of the Court,” according to Politico.

“It is time to heed the Constitution and return the issue of abortion to the people’s elected representatives,” Alito wrote.

If the draft is adopted, it would rule in favor of Mississippi in a case about the state’s attempt to ban most abortions after 15 weeks of pregnancy. The Supreme Court heard oral arguments in that case in December. Nothing is final until the opinion is published, which could be in the next two weeks.

“Justices circulate draft opinions internally as a routine and essential part of the court’s confidential deliberative work,” said a Tuesday press release from the Supreme Court on its website. “Although the document described in yesterday’s reports is authentic, it does not represent a decision by the court or the final position of any member on the issues in the case.”

“The Senate Women’s Legislative Caucus is appalled and deeply angered at the recent draft SCOTUS opinion regarding the historic Roe v. Wade decision that is currently circulating,” the statement said. “A woman’s right to choose is a fundamental right that must be protected at all costs. As a caucus, we will continue to fight at every level of government to ensure that everyone has complete autonomy over their own body. This assault on our right to choose will not be tolerated.”

U.S. Sen. Mazie Hirono, a Hawai‘i Democrat and member of the Senate Judiciary Committee, condemned the draft opinion and said during a Judiciary Committee meeting Tuesday that the decision is just the beginning of a right-wing attack on other constitutional rights.

“As far as I’m concerned, anybody in this country who cares about our civil rights, and indeed our constitutional rights, should be very, very concerned about what this court is prepared to do — at least, the radical, right justices of this court,” Hirono said, according to a press release.

She also shared her outrage on social media.

“Women in this country will soon wake up and realize they no longer have control over their own bodies,” Hirono said Monday night, according to the release. “Alito’s fervent wish is about to come true, thanks to the Trump justices. Republicans have sabotaged the court — and women across the country are about to pay the price.”

“If that decision becomes final, I hope that Congress can act to codify the right to an abortion,” Evslin told Big Island Now and Kaua‘i Now in an email Tuesday. “Hawai‘i state law already prohibits the state from interfering in a woman’s right to choose an abortion, and I do not expect that to change. But, unfortunately, for millions of other women around the county, I do expect that many other state legislatures will prohibit access to abortion.”

“The landmark Roe v. Wade decision made by the U.S. Supreme Court in 1973 was the right decision. Any action to overturn the ruling is wrong,” Ige said in a statement provided to Big Island Now and Kaua‘i Now via email. “The state of Hawai‘i and I, personally, support women’s reproductive rights, and a woman’s right to make her own health care decisions. No matter what the Supreme Court decides, I will fight to ensure a woman’s right to choose in the state of Hawai‘i.”

The governor’s office said Ige will comment further once the high court publishes its final ruling.

“We do not know whether this draft is genuine, or whether it reflects the final decision of the court,” said a statement by President Joe Biden posted Tuesday on the White House website.

Biden’s statement said his administration argued strongly in defense of Roe v. Wade, saying the 1973 decision is based on precedent recognizing “the Fourteenth Amendment’s concept of personal liberty.”

“I believe that a woman’s right to choose is fundamental, Roe has been the law of the land for almost 50 years and basic fairness and the stability of our law demand that it not be overturned,” the president said in his statement.

He has directed his Gender Policy Council and the White House counsel’s office to prepare options for a response from his administration to the continued attack on abortion and reproductive rights, “under a variety of possible outcomes in the cases pending before the Supreme Court.”

“We will be ready when any ruling is issued,” Biden’s statement said.

The president added that if the high court does overturn Roe v. Wade, it will be up to elected officials at all levels to protect a woman’s right to choose.

“And it will fall on voters to elect pro-choice officials this November,” Biden’s statement said.