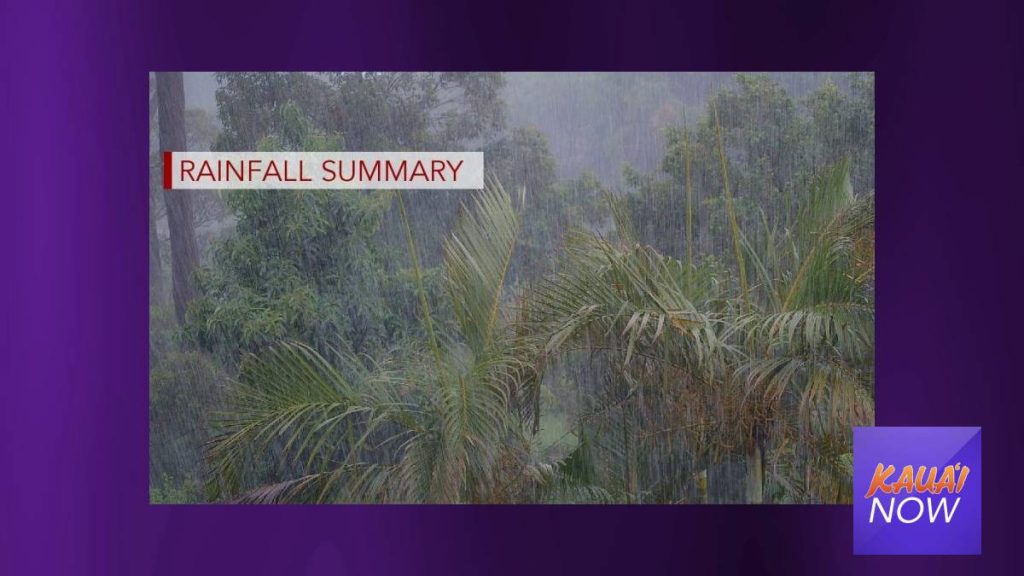 Only one site on Kauaʻi continued to record near average rainfall totals for the year through the end of March.

“Līhuʻe Airport remains as the only site with a near average rainfall total for 2022 through the end of March,” said the monthly rainfall summary for March prepared by Kevin R. Kodama, senior service hydrologist for the National Oceanic and Atmospheric Administration and National Weather Service Weather Forecast Office in Honolulu.

The airport gauge recorded 10.14 inches of rain through the end of March, or 84% of an average 12.02 inches. For the most part, however, most rain gauges around the island recorded near to below average totals for last month.

“Most of the sites along the lower leeward slopes had monthly totals at less than 50% of average,” said Kodama’s report.

The U.S. Geological Survey Kilohana rain gauge had the highest monthly total of 21.16 inches, or 114% of average, and the highest daily total of 6.97 inches during a heavy rain event March 22, according to the summary. On the northeast side of the island, the Anahola gauge’s 1.50 inches, or 29% of average, registered as the lowest March total since 2001.

Kodama explained in his monthly summary that the central North Pacific weather pattern that has produced generally dry conditions over the main Hawaiian Islands since early January continued into the first half of last month. A weak large-scale surface pressure pattern resulted in light winds, mainly from the east to east-southeast.

“A couple of weak cold fronts, one on March 2 and another on March 7, got close to the state but never reached any of the islands,” the summary said. “Light wind patterns like these allow land and sea breezes to dominate the local conditions. Stable conditions aloft also prevented significant rainfall on most of the days.”

Exceptions occurred March 8-9, when a shower area within the easterly low level flow moved over windward slopes of the state. An upper tropospheric trough over the area provided some instability to enhance the showers, resulting in 1-2 inches of rainfall along the slopes of the Big Island’s Hāmākua District.

The large-scale weather pattern over the North Pacific finally shifted during the second half of March, resulting in an increase in rainfall over the state.

“This period featured stronger trade winds than earlier in the month, and a resultant increase in windward showers,” the summary said.

A weak cold front also stalled March 22 over Kauaʻi for several hours and produced 5-7 inches on the northwestern side of the island.

“The 3-5 inches of rainfall over the Hanalei River was enough to cause the river to overflow and inundate Kūhiō Highway near the Hanalei Bridge for several hours,” Kodama’s report said. “The highway was also inundated by Wainiha River, though for a shorter period of time than at Hanalei.”

Click here to read the full rainfall summary for March.