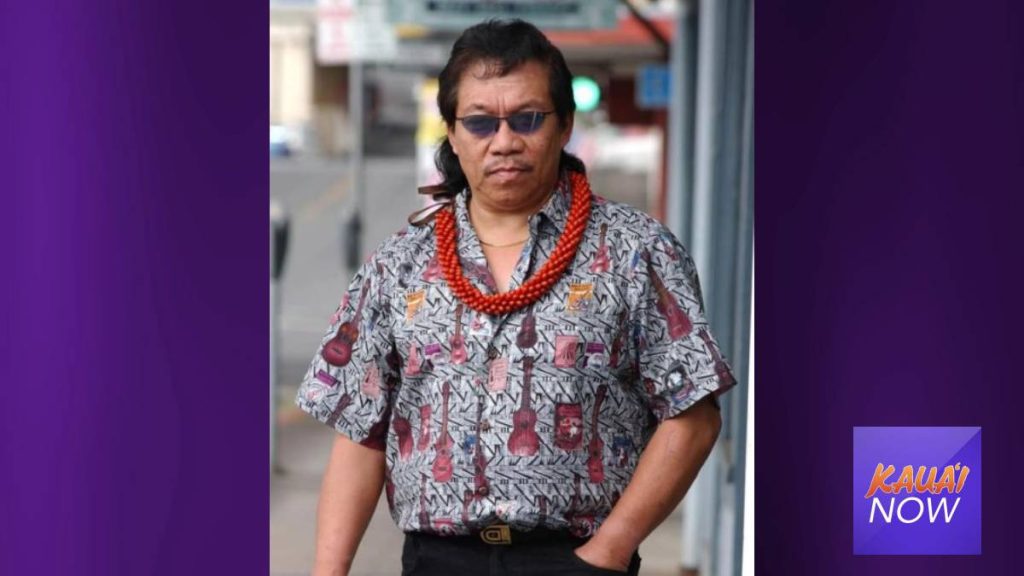 A gentle rain blanketed Hilo on Sunday night, falling like tears on the Big Island as it began to deal with the loss of one of its most beloved sons.

Renowned kumu hula, musician, composer and recording artist Johnny Lum Ho died Sunday, April 3. Born in 1941, Lum Ho was a man who became synonymous with hula and profoundly impacted the lives of anyone who knew him.

“Uncle Jonny’s passing is a blow to our community, especially as many prepare for the Merrie Monarch Festival, an event that Uncle Jonny and his haumāna always brought a special energy to,” said Hawai’i County Councilman Holeka Inaba in a statement. “As an island, we mourn the loss of a pillar and a true symbol of ‘Big Island style.’ Moe me ke aloha i Ka Ua Kanilehua (Rest peacefully in the Kanilehua rains).”

Known for his creativity and writing most of the chants and songs performed by his hālau, Hālau O Ka Ua Kani Lehua, he also crafted the group’s choreography, all of which made them favorites during the Merrie Monarch Festival in Hilo.

Lum Ho was one of the kumu in the first Merrie Monarch competition in 1971 and made his final trip to the festival’s competition stage in 2018. He led Hālau O Ka Ua Kani Lehua to many victories on the Merrie Monarch stage and also fostered Miss Aloha Hula candidates as well as keiki hula dancers.

“While we grieve his passing, he lived a full, blessed life that impacted generations in ways that we know his legacy will live on,” said a statement issued Sunday by Lum Ho’s family.

“Johnny loved to tell stories of Hawai‘i, its people and places through his unique style of song and dance,” said U.S. Rep. Kai Kahele, a Hawai‘i Democrat from the Big Island, in a statement. “He will be remembered for his commitment to perpetuate the Hawaiian culture, in particular, his passion for hula and unsurpassed leadership as a respected kumu.”

Kahele added that Lum Ho’s legacy will continue through the many lives he touched.

“We are extremely saddened by the sudden loss of legendary Hilo kumu hula Johnny Lum Ho. Uncle Johnny was a larger-than-life hula icon whose creative and passionate knack for storytelling helped spread Hawaiʻi’s history and culture with the world,” said a statement from Hawai‘i County Mayor Mitch Roth. “Our thoughts and prayers are with Hālau O Ka Ua Kani Lehua and all those that Uncle Johnny has touched throughout his time as a community leader, kumu and friend.”

Roth said there is comfort in knowing Lum Ho’s legacy will live on through his many haumāna, who continue to share their teachings far and wide.

“Hawai‘i has lost one of its renowned and talented kumu hula,” said a statement from Hawai‘i County Council Chairwoman Maile David. “My heartfelt aloha and condolences go out to the Lum Ho ‘ohana and the many haumāna that have been blessed with the privilege of learning from one of our legendary kumu hula. We will certainly miss his presence, but his spirit lives on through his haumāna. Aloha ‘oe.”

Musician and recording artist Mark Yamanaka, who played in Lum Ho’s hālau band, was signing at a funeral in Hilo when he got word that the beloved kumu hula had died. His reaction was one of shock.

“There (was) all kinds of emotions, all kinds of silence in my mind and I was like is this real?” Yamanaka told Big Island Now. “But I knew it was real and I just didn’t want to believe it, I guess, and it’s still kind of sinking in right now.”

He put on some of Uncle Johnny’s music while he drove to work Monday morning and got emotional just listening to their voices blend, quietly reflecting on the time he had with Lum Ho. He’s had the chance to record some music with Lum Ho and recorded some of the kumu’s music on his own CDs.

Yamanaka and Lum Ho met in 1996. Yamanaka was still a high school student and an aspiring and learning musician. The meeting happened through a friend who brought Yamanaka to Uncle Johnny’s hālau one day. The rest is history.

“I had 20-plus years with him as far as music is concerned with his hālau. I had a lot of great times with him, so I cannot be disappointed with that,” Yamanaka said. “He gave me opportunities, he gave me the time and knowledge and talents for me to hopefully carry out his legacy.”

“He was very shy. He didn’t want the spotlight on him,” Kawelu told Big Island Now on Monday. “He would always be in the background. He was so very humble.”

But behind closed doors, Yamanaka said the kumu loosened up a lot. He said Uncle Johnny was a fun, loving and playful person — “kolohe, if you will.” He was also very religious.

“We had a lot of good times behind closed doors. Just having fun with him and just soaking in all of his knowledge of whatever was going on in his brain,” Yamanaka said. “We were all sponges to his wisdom.”

“He was not one to copy anybody else, other than doing and performing songs he loved by other artists,” Yamanaka said. “When it came to his hālau, rarely would he do traditional Hawaiian music. He would always come up with his own material.”

He said seeing a dancer taught by Lum Ho dance, you can really tell they have Uncle Johnny’s flavor.

On the music side, Yamanaka said he was one of the fortunate ones to be able to perform Lum Ho’s music and learn from him.

There will always and forever only be one Johnny Lum Ho.

“As a musician and wanting to keep his music alive, it’s gonna be tough,” Yamanaka said. “As far as his creativity with music, his chords, his chord changing, his strumming pattern changes within the song, all that stuff is something that a lifetime of study cannot reproduce.”

And even though he and others are saddened by Uncle Johnny’s death, Yamanaka said he and Lum Ho’s hālau can find comfort in knowing their kumu, their friend and their mentor is now with their Maker.

“We are happy in knowing that,” he said. “That he’s with Jesus and he’s walking with him, and he’s making all kinds of music up there right now.”

“He was strong in his faith,” Kawelu said. “He believed in the Lord and that’s where he’s at now.”

Many people took to social media after Uncle Johnny’s death to offer condolences to his family and comments about the kumu.

“Undeniably in a class of his own! Always looked forward to watching his Hālau, they embodied the essence of our big isle,” said a comment by Leilani Blankenship on Big Island Now’s Facebook post Sunday evening sharing the story about Lum Ho’s death.

Shellie Lee commented on the same post, saying she used to dance for Uncle Johnny in her keiki days.

“My condolences to the ‘ohana and hālau. Rest in love Uncle Johnny,” said Lee’s comment.

“RIL Kumu Lum Ho! Merri Monarch and the art of Hula will never be the same …,” commented Ambronette Rivera on the post.

Victoria Hokulani Latenser, who use to dance with Hālau o Kekuhi, said in a message to Big Island Now on Facebook Messenger that Lum Ho’s death is a huge loss of an iconic kumu. She added that while she never danced for him, Uncle Johnny’s creativity was second to none.

The Merrie Monarch Festival didn’t have an official statement about the loss of Lum Ho, but Kawelu shared a few personal comments about the man who was such a big part of the event.

“We were just so saddened by Uncle Johnny’s passing,” Kawelu said, adding that Lum Ho and his hālau won many times on the competition stage, but it wasn’t those wins that made him so popular.

He was a hometown boy who inspired many.

“He inspired his dancers and the passion of his hula came out through them,” Kawelu said.

And that passion and inspiration is his legacy.

“It came from his mother and he passed it on through his dancers, and his legacy will live on through them,” Kawelu said. “They’re all over the world.”