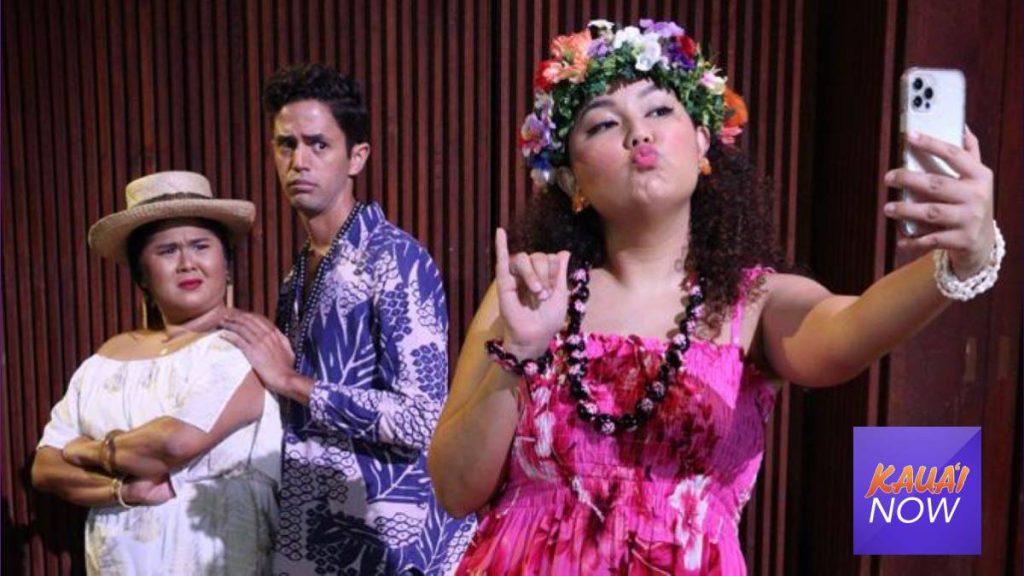 A University of Hawai‘i theater that continues to expand hana keaka, or Hawaiian theatre, is again helping the Hawaiian storytelling genre to flourish with the debut of a show that not only includes ʻōlelo Hawaiʻi, or Hawaiian language, but also what its director dubs ʻōlelo māhū.

“Hoʻoilina,” which means legacy or inheritance, is set in pre-pandemic Hawai‘i upon the luxurious slopes of Lēʻahi and hones in on a Kanaka Maoli, or Hawaiian, family anxiously poised for a will reading that will determine the fate of a huge inheritance from their beloved matriarch. Just as the will is about to be read, a quirky stranger appears at the door, claiming her right to the hefty endowment.

As chaos ensues, family secrets are revealed, causing them to question their own relationships, identity and future while being insidiously constricted by the pressures of capitalism and cultural loss. The characters explore real-time issues such as what it takes to be considered Hawaiian.

The comedy, which premieres April 15 at Kennedy Theatre at UH-Mānoa, is being directed and was written by Mānoa graduate student Ākea Kahikina, a Hawaiian theatre master of fine arts candidate who was inspired to write the show because of the growth of indigenous Hawaiian theatre.

“Things are happening … I’m glad to be a part of this movement that is growing exponentially and creating more new works on a grand scale,” said Kahikina, who also teaches ʻōlelo Hawaiʻi courses at UH-Mānoa, in a press release about the production. “I couldn’t be more thankful to be doing this at this level.”

Most of the play is performed in Hawaiian; however, audiences will hear performers speak in a multitude of languages such as Pidgin, English and what Kahikina calls ʻōlelo māhū, or queer creole. His concept of the māhū dialect is one he claims is a descendant of ʻōlelo kake, a long-standing traditional form of garbling language to conceal information. Today, ʻōlelo māhū incorporates Pig Latin and is delivered in a style similar to the cadence of Pidgin.

“Putting that language in there is a way to honor my queer community, my māhū brothers and sisters that I’ve learned from,” Kahikina explained in the press release. “My partner, Kaʻiminaʻauao Cambern, he’s taught me everything that I put into the script.”

For more information, visit the UH-Mānoa Department of Theatre and Dance website.