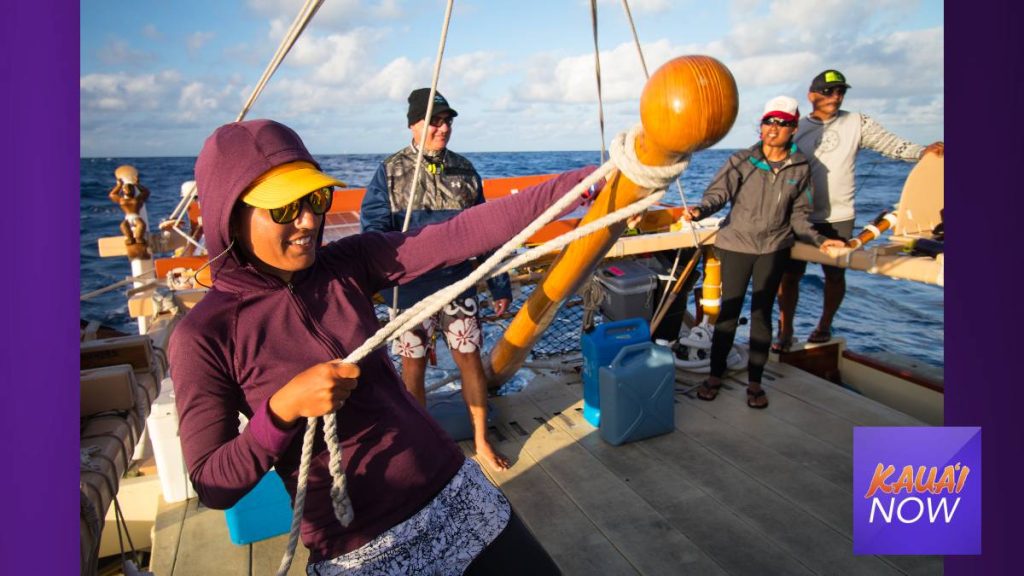 The Hōkūleʻa and Hikianalia voyaging canoes are set to sail for Tahiti in the coming days after three postponements over the last two years due to the COVID-19 pandemic.

The Polynesian Voyaging Society reports crews will depart for French Polynesia as soon as April 4. The “Kealaikahiki Voyage” will focus on leadership, navigational training and cultural protocol to prepare the crew and test the canoes before they embark on the Moananuiākea Voyage next year. As part of PVS’ succession plan, next-generation voyaging leaders will captain and navigate the two canoes from Hilo to Tahiti.

Among those rising leaders is 35-year-old Lehua Kamalu, who will captain and navigate the Hōkūleʻa. Kamalu will be the first wahine to lead the outrigger to Tahiti from Hawaiʻi. She is also among the first few women to captain a voyaging canoe over deep seas.

Kamalu first started volunteering with PVS in 2009 and was hooked immediately.

“Is anyone not a fan of the Hōkūleʻa when they’re growing up in Hawaiʻi? I feel like that just comes naturally,” Kamalu said. “It was always so captivating, inspiring.”

During those early years, Kamalu said the society was talking about its worldwide voyage that ultimately took place from 2014 to 2017. She did her first open ocean voyage in 2014 to Tahiti, training to be a navigator.

“Five years is not enough to prepare you for your first voyage but you also learn things along the way,” Kamalu said as she reflected back on her early training.

The Oʻahu woman would go on to do eight of the 32 full legs of the worldwide voyage. In 2018, Kamalu was captain navigator of Hikianalia on a journey to California.

Kamalu said it wasn’t her plan to captain the Hōkūleʻa. While she initially didn’t think it was humanly possible to do the things she was learning, she said she started to realize the “incredible human capacity for learning, researching, practice and experience.

“Being immersed in it was a whole new experience,” Kamalu said, adding it helped build confidence and vision of what her role is within the society.

“When we’re thinking about voyaging and training new generations, we’re talking about succession — we’re talking about the next 50 to 100 years of voyaging,” Kamalu said. “If you’re there and you’re in that space at some point you come to that realization of stepping into that responsibility.”

Kamalu thinks confidence is important going into a journey like the one fastly approaching. It’s important to be focused and remember one’s training.

“In the role of being a teacher and trying to make sure you are a link to the next generation has been something on my mind,” Kamalu said. “We have a great team of young people coming out on this voyage. A voyage to Hawaiʻi to Tahiti doesn’t happen often. It’s an incredibly special opportunity.”

While moving into such responsibility is terrifying, Kamalu said the work has been rewarding and the support from the community has been incredible.

Kamalu is aware that she is among the few women to captain a deep-sea voyage, however, she has never felt it uncommon or rare of practice as many women captain and navigate interisland and coastal journeys.

Kamalu said the voyaging practice is an “incredible balance between the male and female energies and perspectives.”

“I have this lens of looking out at the women who are in this practice, this space, being continuously inspired by what they’ve done even before I got here and also seeing how they are such powerhouses in the world of keeping the knowledge and keeping the work and effort moving,” Kamalu said.

As the journey nears, Kamalu is mainly focused on the ocean-going part of it and what her responsibilities are there. As captain, the 35-year-said she is charged with making sure the canoe and crew are operating as a unit. The navigator is the eyes of the canoe.

“I know at the end of this voyage is our older brothers and sisters in Tahiti who always remind us of our extremely deep connection to the islands in the Pacific,” she said.

While Kamalu has had many mentors throughout the years. Two of them include Pomai Bertelmann and Kaiulani Murphy, describing them both as powerhouses.

Bertelmann, 48, of Waimea, said she got involved in voyaging when she was 22, however, her family has been “integral in restoring the canoes including, the Hōkūleʻa throughout the years.”

While there are more kane who seem to captain and the canoes, she said it isn’t uncommon for women to hold such positions.

Bertelmann has also captained the Hōkūleʻa on a deep-sea voyage from Tahiti to Hawaiʻi. Bertelmann has been impressed with Kamalu’s growth over her years in training with the voyaging canoes.

“Lehua has a strength that I perceive is older — it’s from a time before,” she said. “Also, she’s present. She has her finger on the pulse. Thereʻs a level of accountability that she’s taken on herself.”

For deep-sea voyaging, Bertelmann believes Kamalu is the second wahine to undertake the role of captain.

“The people you choose are willing to be in service to the canoe first,” she said. “When you can serve the canoe, it is natural to serve each other.”

Bertelmann said this voyage matters right now as it is about the succession of canoe voyaging.

“It matters that the next ones step up earlier than we did in these roles,” she said.

What Bertelmann hopes for Kamalu is that the team she creates is there to support each other with the insight to malama the canoe first, and take care of each other.

PVS is now three generations on the ground in voyaging. While Kamalu’s experience and wisdom on the open water will be beneficial to the younger generation, Bertelmann said the biggest mentor is the canoe itself.