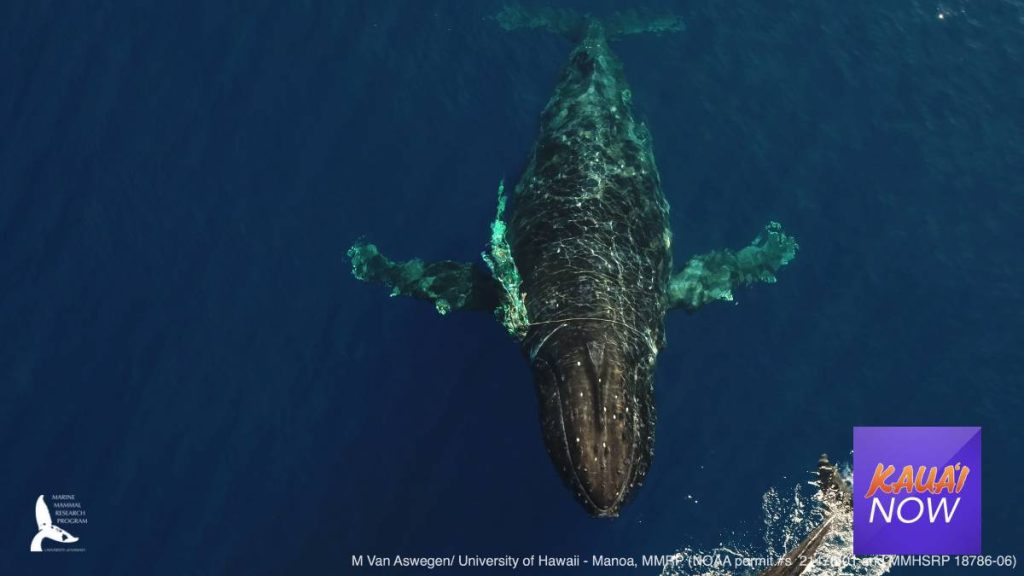 Researchers are transitioning from data collection to analysis as the whale watching season winds down.

While whale counts reported weren’t out of the norm, experts say the number of successful disentanglements of humpback whales stood out. With an average of freeing two whales per year, Ed Lyman, with the Hawaiian Islands Humpback Whale National Marine Sanctuary, said the organization received nine reports of entanglements and mounted responses were made to five of them.

The network is dependent upon the commitment of many state and federal agencies, including the state of Hawaiʻi Department of Land and Natural Resources, the NOAA Fisheries Pacific Islands Regional Office, the NOAA Office of Law Enforcement, and the U.S. Coast Guard, private non-governmental organizations, fishermen, researchers, and other members of the on-water community working together.

While all five whales had gear removed from their bodies, three of them were completely disentangled, including a mother whale traveling with its calf.

“Her survival was linked to the calf’s survival,” he said. “By helping the mother we help the calf.”

Lyman said the number of reported whales in distress fluctuates depending on sightings and the number of people reporting those entanglements. “You’re not going to find them all in the first place.”

The sanctuary and its partners have done 13 to 14 dedicated trips to help compromised whales, that includes the five entangled animals.

Lyman said the sanctuary and its partners respond to whales that are compromised, not just entanglements. On Sunday, March 27, the responders went out in search of a calf that was injured following a boat strike.

Lyman attributes the significant success of this year’s disentanglements to an on-water community willing to help by reporting the incidences and staying with the whales until responders can arrive. Additionally, the equipment is getting better with sharper knives, longer poles and cameras on the end of poles as well as more trained people to assist in the responses.

While the number of humpbacks in the area is getting lower, Lyman said they’ll probably see whales till May, but they’ll be few and far between.

Cindy Among-Serrao, Hawaiʻi Island program coordinator for the sanctuary, only site leaders were allowed to assist in the whale count. This month was the first time since the outbreak of COVID-19 that volunteers were allowed to help.

Count events included 87 site leaders in January and 81 in February. This month, however, there were 241 site leaders and volunteers with 136 sightings reported between 10-10:15 a.m., lower than the two counts prior.

“March is generally a low whale sighting month,” Among-Serrao said, adding despite that the numbers reported were decent. While there were more volunteers, she said it doesn’t mean more whale sightings.

Serrao said counting is important because it’s nice to see where whales are being seen to let boaters and recreators know where they are located as calves can be susceptible to ship strikes.