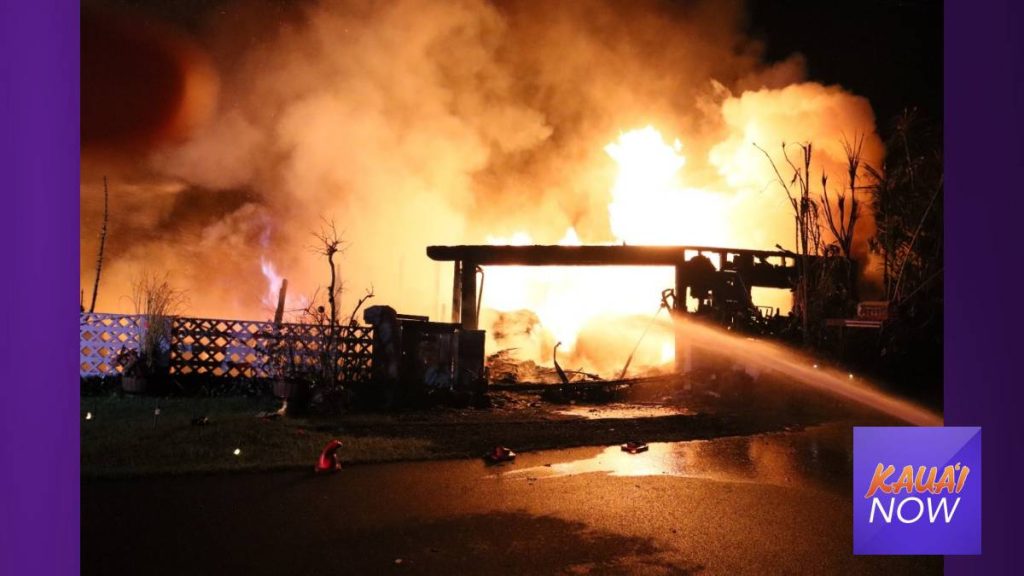 A fire Wednesday evening in Wailua resulted in the displacement of one resident.

No injuries were reported. Volunteers with the American Red Cross assisted the displaced individual.

Firefighters responded shortly after 9 p.m. Wednesday to a report of a structure fire on Kihei Road in Wailua.

According to a preliminary report from the Kaua‘i Fire Department, upon arrival, fire personnel discovered a single-story dwelling fully engulfed in flames at 9:10 p.m. Wednesday. Firefighters engaged in a defensive strategy until the fire was contained. However, firefighters remained on the scene to extinguish multiple flare-ups throughout the night.

At 6:20 a.m. Thursday, Kaua‘i Police Department personnel were at the scene as firefighters conducted a shift change. At about 7:35 a.m., KPD personnel informed dispatch that the structure again flared up. At 9:45 a.m., the county Department of Public Works used heavy machinery to move debris and assisted fire personnel with final extinguishment.

Fire investigators and personnel remained on the scene and later cleared at 2 p.m. Thursday

The structure is considered a total loss. Damages and contents are estimated at $893,000.

The cause of the fire is undetermined because of extensive fire damage.