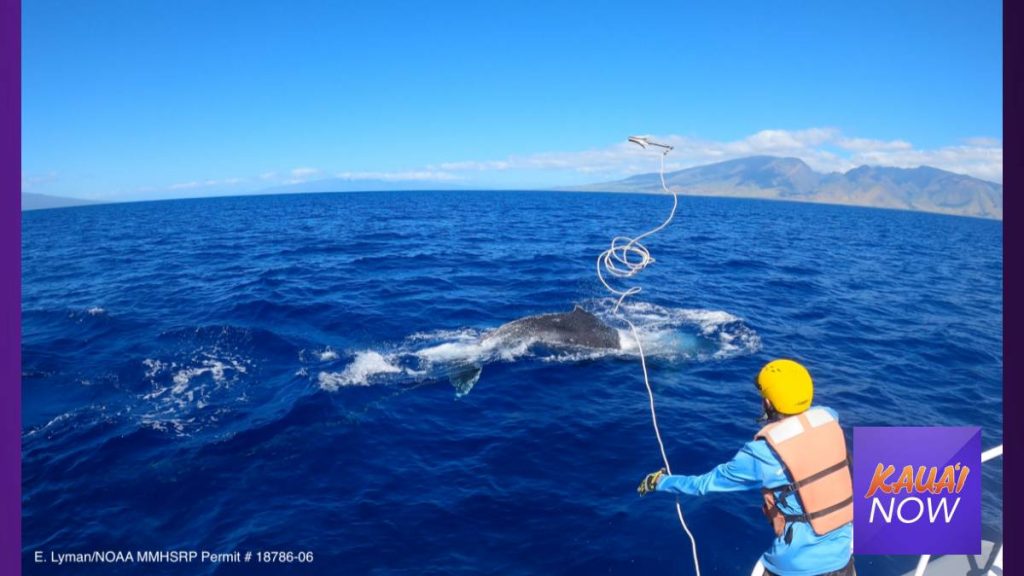 On Wednesday, Jan. 26, a yearling humpback whale entangled in at least 140 feet of line, with a buoy trailing about 60 feet behind, was freed in waters off Ukumehame, Maui, by a team led by responders trained by the National Oceanic and Atmospheric Administration.

An authorized response was mounted, and the animal was safely cut free of all gear. Preliminary analysis indicates the identity of the gear as local mooring gear of considerable weight. The recovered gear will be further analyzed to determine its possible origins and reduce entanglement threats for large whales in the future.

The entangled whale was reported by a PacWhale Eco-Adventures vessel, Ocean Odyssey. The entanglement was a single wrap of small-gauge, yellow line around the animal’s tailstock and over the fluke blades, forming a bridle that trailed behind to a moderate-sized white, hard plastic trawl buoy.

The animal was in “good” condition, though the wrap at the tailstock was beginning to cut into its flesh. The animal’s behavior was very evasive, and while it stayed near the surface, it maintained unusually rapid speeds, at times in excess of 6 knots. The entanglement and its impacts were deemed life-threatening.

The entanglement response team aboard the sanctuary vessel Koholā met up with trained first responders who were on site monitoring the whale’s position and providing initial assessment. Trained entanglement responders approached the animal from an inflatable launched from the Koholā and used a hooked knife attached to a pole to safely cut it free.

Mariners are asked to keep a sharp lookout for whales in distress, but not to approach closely or attempt to assist them. Only trained and well-equipped responders authorized under a Marine Mammal Protection Act/Endangered Species Act permit issued to the NOAA Fisheries Marine Mammal Health and Stranding Response Program are permitted to assist entangled whales and other marine mammals.

Immediately reporting an entangled or otherwise injured or distressed whale is the best way to help the animal.

If you see an injured or entangled marine mammal, call the NOAA Marine Wildlife Hotline at 888-256-9840 or the U.S. Coast Guard on VHF channel 16 immediately. If you are reporting a vessel coming too close to a whale, call the NOAA Fisheries Enforcement Hotline at 800-853-1964 or email respectwildlife@noaa.gov.

Additional guidelines and safety tips can be found online.

It is illegal to approach a humpback whale closer than 100 yards by any means by sea or drone and 1,000 feet by aircraft.