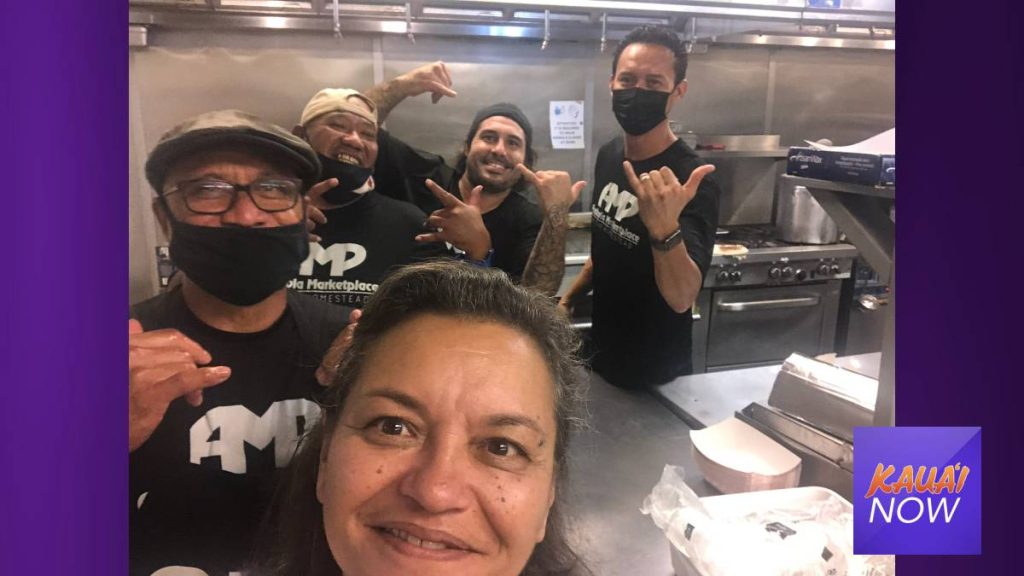 While Prince Jonah Kūhiō Kalaniana‘ole was advocating for the passage of the Hawaiian Homes Commission Act by Congress in 1921, he said if conditions persisted as they were at the time, his people “will pass from the face of the earth.”

“This legislation proposed seeks to place the Hawaiian back on the soil, so that the valuable and sturdy traits of that race, peculiarly adapted to the islands shall be preserved to posterity,” said Kalaniana‘ole.

A new business in Anahola is following through with Kalanian‘ole’s vision, operating on Hawaiian Home Lands and employing Native Hawaiians who make the homestead their home. And the nonprofit organization backing the endeavor thinks it’s a model that could be replicated throughout the state.

Anahola Café opened at the end of October 2021. It’s led by the Homestead Community Development Corporation, a Native Hawaiian nonprofit dedicated to creating jobs and affordable housing on or near Hawaiian Home Lands, and a handful of Anahola residents.

The café’s core team consists of head chef Wyatt Kamoku, project coordinator Melanie Freitas and three others. All of them are from Anahola families living on Hawaiian Home Lands and come from families with cooking prowess.

“All five of these guys have families that are master cooks,” Homestead Community Development Corporation CEO Robin Danner told Kauaʻi Now over Zoom on Wednesday, Jan. 19.

The café offers the best backyard dining, located at the Anahola Marketplace on Kūhiō Highway at the 12.5-mile marker in a rural setting beneath the Kalalea mountain range. Danner called it “the gateway to the North Shore of Kaua‘i.”

The menu features burgers and saimin, creations by Kamoku, and includes the ever-popular Teriyaki Burger, the Taro Burger and the Anahola Burger.

“The community has had a lot to do with that menu because they’ll ask for specific things and if it’s within our business plan, then Wyatt tries to make it happen,” Danner said.

The café’s head chef is also looking to expand his menu options to eventually include daily specials with plate lunches and other items, according to Freitas.

Kamoku has a vision of the café hosting night events such as dances, karaoke and live bands with a focus on featuring Anahola artists and workers. There also is some talk about starting a farmers market next to the cafe at the Anahola Marketplace.

But the first step, Danner said, is to expand the business hours. Right now, the cafe is open from 11 a.m. to 8 p.m., Thursday through Monday. Plans are to operate seven days a week beginning in February.

Business has been pretty steady since the café opened, according to Freitas. Danner said the response from the island has been fantastic, with the cafe serving a couple hundred tickets a day.

“Being very rural and not in the main commerce center, it’s pretty amazing what these kids are doing,” Danner said. “It really is amazing. I don’t think they really recognize how extraordinary their menu is, and I really think it’s their attitude. Big, big aloha. Very positive. You walk into this space and it’s very, very positive. You feel at home.”

“You feel the aloha in Anahola,” Freitas added.

Customers are coming from all over, but homesteaders have become regular clientele, including the keiki, who Freitas said come to the cafe all the time. And it’s the food that keeps them coming back.

“They love the food,” Freitas said. “You know, a lot of the time they say they pass by and they see us but they don’t stop. But when they do, you always see them; they’re returning customers.”

One hundred percent of the revenue from Anahola Café supports its operation and the mission of the Homestead Community Development Corporation to create affordable housing and jobs on or near Hawaiian Home Lands.

Sales is only one side of the equation though.

“We are learning together about the business end of food service through this project, all the while having fun and employing our local people,” said Kara Chow, a deputy director at the Homestead Community Development Corporation.

“We’re getting to learn together on things like cost of goods, labor cost management, you know, and think through all of these things while, I mean Kara said it best, having fun learning about that new frontier, really, for this group,” Danner said.

She added that taking on the business side of the café, especially in a rural setting, has its challenges, but the café’s crew and the nonprofit are learning and overcoming them together.

“It sounds mundane, but it’s actually exciting for the seven of us to be doing this together, merging great food and customer service with the business acumen,” Danner said. “We’re learning together.”

“You learn something new every day,” Freitas said.

With all of the crew members being from Anahola, they were already close before working together at the café. Danner said they do what they do as if they’ve been doing it their whole lives and doing it together.

“These guys know everything about one another or they’ve heard everything,” she said. “I just think that makes them gel even more.”

“We have an awesome team and we work perfect together,” Freitas said. “There’s good communication and we share ideas with each other to help make the business prosper.”

The homesteading community is proud of the café and the team behind it, Danner said. Especially those in the community who are in the older generation.

“We’re just thrilled to see our own people work together and launch something that they’re passionate about and getting to work for themselves and get to create the solutions that every homestead needs,” Danner said. “One of those solutions is to create local, rural economies that match our values, that match the way we want to treat people and the way we want to be treated. I think their courage and their talent and their passion, all that together, is like this amazing explosion of success. And I think it should be replicated across the state. I think it can be replicated across the state.”

Freitas said it’s awesome being a part of a business operating on the same homestead lands on which she grew up.

“I love it,” she said. “I’m a lessee on Anahola Hawaiian Homestead and I just love being able to work on my homestead and to help give other homesteaders that opportunity.”

Even better, Danner said, is that the café and the certified kitchen the Homestead Community Development Corporation also operates inside are part of a marketplace that’s on Hawaiian Home Lands, which is exactly what Kalaniana‘ole wanted — Native Hawaiians living, having homes, farms, ranches and mercantile opportunities right on homesteads for everybody.

“It’s been really rewarding to watch a small team of local residents operate this little social enterprise in our little rural area on the island of Kaua‘i,” Chow said. “We invite everyone to come to the Anahola Café. The food is great, and our team has a whole lot of aloha.”