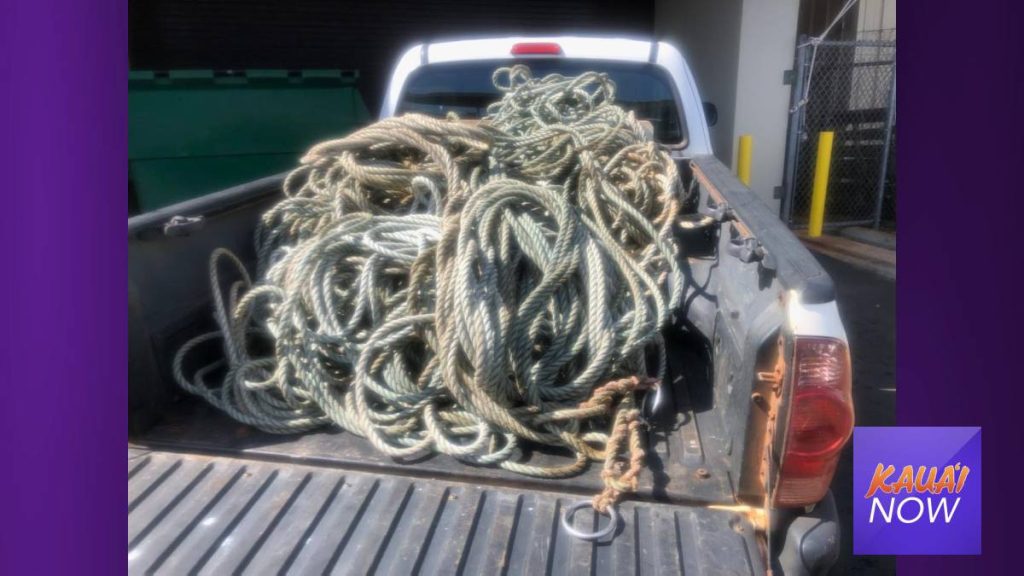 A team led by the National Oceanic Atmospheric Administration continues to track an adult entangled humpback whale with a last-known position off Niʻihau.

A community member first spotted the whale off Po‘ipū, Kauaʻi on Sunday, Jan. 16, and reported the entanglement to NOAA officials. According to NOAA officials, the organization mobilized a same-day joint response in coordination with the Hawaiʻi Department of Land and Natural Resources, also known as DLNR, and the U.S. Coast Guard.

NOAA described the animal as emaciated, light-colored, rough-skinned, and had patches of rust-colored cyamid amphipods, or whale lice, indicative of a whale in distress.

On Monday, the team mounted a second response; however, the whale moved away from Kauaʻi, outrunning the team. According to officials, the telemetry buoy will self-release in approximately one week avoiding any additional impact to the whale.

To date, the team has removed nearly 2,000 feet of heavy gauge line from this whale, greatly improving its condition. The gear will be further investigated in an effort to determine its identity and possible origin.

“Our goal is to safely free large whales from life-threatening entanglements and at the same time, gather valuable information that will reduce the frequency and impacts of entanglements in the future,” NOAA officials stated.

Early reporting of entangled whales is key to successful response efforts. The public is asked to call the statewide NOAA Marine Wildlife Hotline at 888-256-9840 to alert authorized responders. For those without cell service, call the U.S. Coast Guard on VHF Channel 16.

If a response is possible, authorities may ask that the reporting party to watch the animal from a safe—and legal—distance. Follow the 100-yard or close approach rule, which prohibits approaching humpback whales by any means (including with a drone) within 100 yards, and within 1,000 feet when operating an aircraft.

If possible, the public is asked to take photos and video of the animal and entanglement from a safe—and legal—distance.

“Rescue efforts should only be conducted by trained, authorized personnel,” NOAA stated. “For your health and the whale’s, do not attempt to free a whale on your own.”

According to officials, disentangling a large whale is dangerous. Removing trailing lines and buoys may diminish the chances of freeing the animal of all gear, potentially leaving lethal wraps behind.