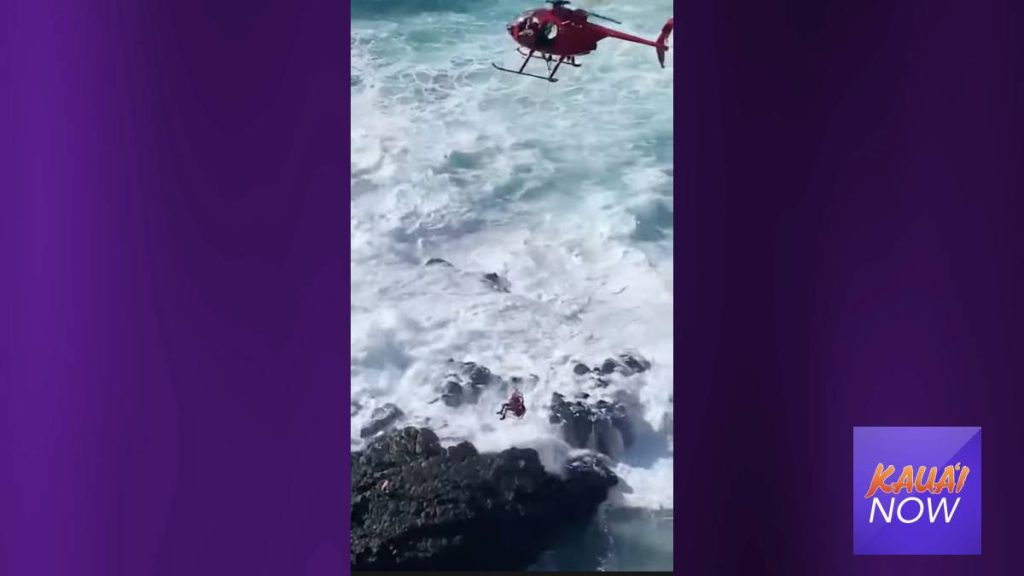 Firefighters were notified of the first report of three residents in distress at Queen’s Bath in Kīlauea at approximately 3:15 p.m. on Saturday. The video above, courtesy of Kaua‘i Fire Department, shows footage of that rescue.

“The three individuals rescued yesterday at Queen’s Bath are extremely fortunate, given the dangerous ocean conditions,” said KFD Deputy Chief Michael Gibson. “Mahalo to our first responders for their quick and efficient response to the incident. Although the Kaua‘i Fire Department in October 2021 locked the access gate to Queen’s Bath due to hazardous ocean conditions and the winter swell, many people continue to bypass the gate. We urge the public that entry in these hazardous conditions can result in injuries or drownings and puts the lives of the public and our first responders at risk.”

The access gate remains locked through Spring 2022 or until deemed safe.

All three patients suffered multiple lacerations, with one patient experiencing mouth injuries while being swept in the hazardous ocean conditions.

According to a preliminary report, first responders responded to a surf rescue involving a 17-year-old male and two 16-year-old female residents. First responders arrived on scene at 3:20 p.m. and discovered two females and one male in distress near the area known as the Horseshoe at Queen’s Bath. After multiple attempts to verbally guide the patients to traverse to a safer location, it was later deemed unsafe due to the hazardous surf.

Two of the swimmers were able to swim and climb aboard an island structure in the middle of the horseshoe. They were instructed to remain on the horseshoe until first responders could safely rescue them. The remaining swimmer remained in place until Air 1 arrived. Shortly after, Hanalei firefighters and Rescue 3 aboard Air 1 rescued the three swimmers via Billy Pugh Net and transported them to a landing zone at the Princeville Golf course.

AMR personnel treated the patients on the scene before they were transported to a local hospital.

The scene was cleared at approximately 4:40 p.m.

First responders responded to the second rescue at approximately 4:30 p.m. involving a 45-year-old male visitor from Austria who was rescued at Kalalau Beach.

Personnel with the Hanalei Fire Station, Rescue 3, and Air 1 responded to the incident.

Rescuers arrived on scene at approximately 5:30 p.m. and discovered the patient with a knee injury who could not hike out of the Kalalau Trail. Once on scene, the hiker and his wife were transported to a landing zone at the Princeville Airport. The patient declined medical treatment. Because both patients were boarded, one rescuer stayed behind at Kalalau Beach before being retrieved by Air 1.

The scene was cleared at approximately 6:30 p.m.