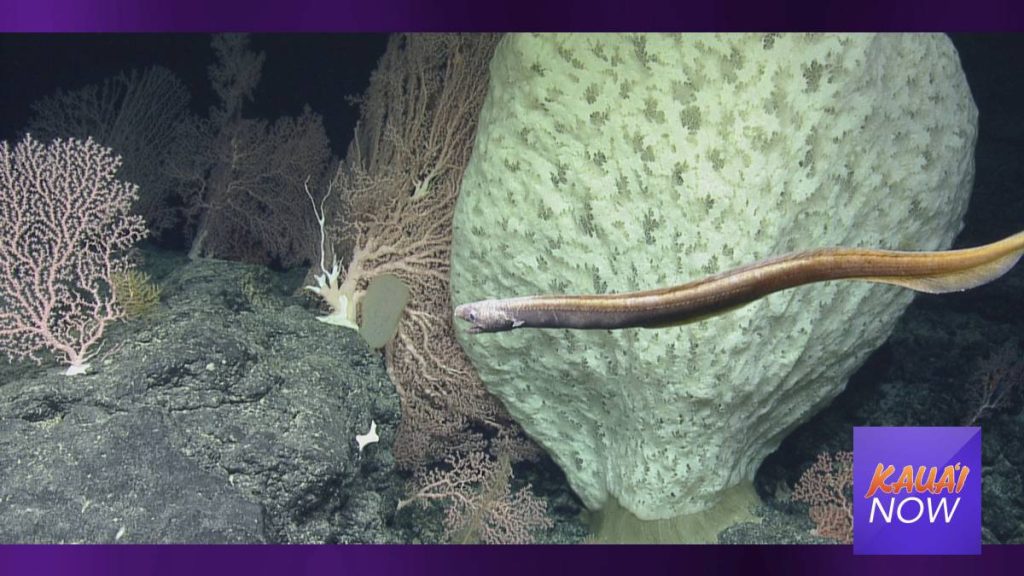 The team of NOAA, Ocean Exploration Trust, researchers and partners returned from the voyage on Dec. 6. What they encountered during the course of their work blew them away.

“The sheer size and density of some of these ancient sponges boggles my mind. This expedition shows me what a treasure we have in the monument,” said Dr. Christopher Kelley, retired University of Hawai’i researcher and one of the leaders of the expedition. “In my 21 years exploring the deep-sea environment of Hawai’i, and well over 100 submersible and ROV dives in the archipelago, the communities on these seamounts have to rank as some of the best I have seen.”

The research team reported their findings in a press release issued Monday, Dec. 13.

“We had a good idea that these seamounts would host thriving coral communities but what we saw in some of these areas, and the sheer density and diversity was amazing,” Auscavitch said. “What is most exciting is the number of similar and different species in the monument compared to other areas of the central Pacific. The results of this cruise highlights the uniqueness of each seamount in Papahānaumokuākea that remains to be uncovered.”

The expedition of scientists, mapping specialists, educators, and a Hawaiian language expert conducted 13 remotely operated vehicle (ROV) dives at depths from 3,000 to 9,600 feet on the Voyager Seamounts south of Kapou (Lisianski Island).

“The Ocean Exploration Trust assembled a fantastic team for this expedition. When analyses of our video and scientific collections are completed, I believe the Voyager Seamounts will be viewed as gems of Papahānaumokuākea Marine National Monument, well deserving of special protection and further study,” Expedition Leader Dr. Emil Petruncio, Ocean Exploration Trust, said.

Over 180 biological and geological samples were collected for later analysis to determine if any are new species, for age dating of the seamount rocks, and to investigate microbial life. Microbes live within mineral-rich crusts that form on the rocks.

“The rocks we collected on this expedition will help to describe the microbial life that plays a role in maintaining healthy deep-sea ecosystems,” says Dr. Beth Orcutt, a senior research scientist with the Bigelow Laboratory for Ocean Sciences in Maine. “We need to better understand these microbial communities and the services they provide to the deep sea, as well as the concentrations of minerals in the crusts, to inform conservation and management of the deep sea.”

“Rocks are the great time keepers of our marvelous planet,” explained Dr. Andrea Balbas, a geologist on the expedition and an assistant professor in geochronology at California State University Long Beach. “We will determine the ages of these rocks to define when these underwater volcanoes formed and paint a picture of the Pacific Plate and how its movement changed over tens of millions of years.”

All dives were recorded in high definition and broadcast live to viewers and shore-side scientists around the world. The footage will also be archived and all organisms and habitats identified. The team completed 77 half-hour interactive Q&A sessions with schools across the country and around the world, including some in ʻŌlelo Hawaiʻi (Hawaiian language.)

“We shared our discoveries with thousands of students through interactions with classrooms, and we have provided the managers of the monument a clearer picture of what they are protecting,” said Dr. Petruncio. “We also provided some valuable observations for those attempting to model the geographic distribution of these vulnerable marine ecosystems.”

The Ocean Exploration Trust and E/V Nautilus will be active in the Hawaiian Archipelago and the Central Pacific for the next two years, conducting research in Papahānaumokuākea and Pacific Remote Islands marine national monuments. Research results from this expedition will help to better manage Papahānaumokuākea and also help us better understand the origins of these deep-sea volcanoes.