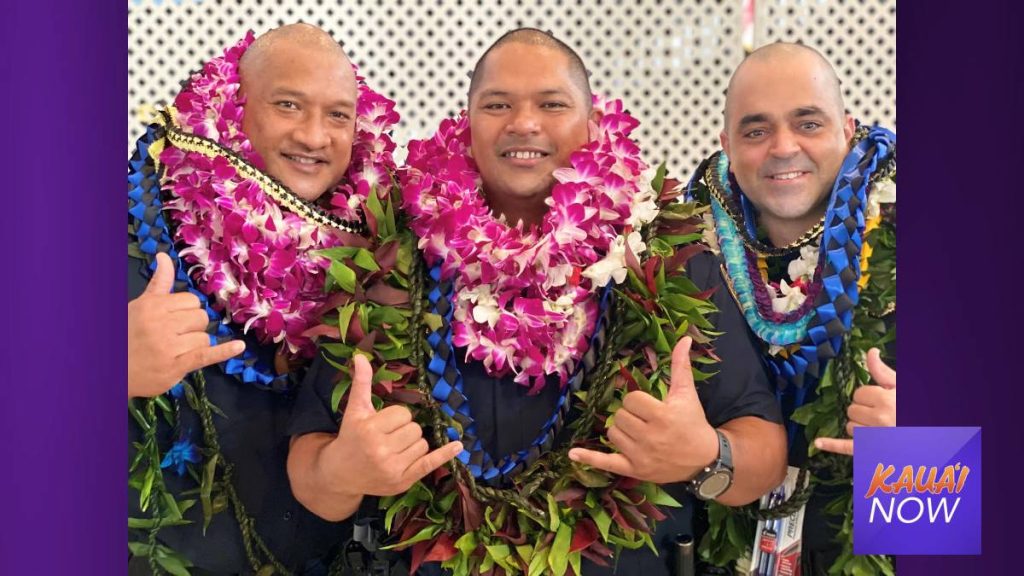 “The magnitude of what you’re about to encounter in this journey is unparalleled. Your willingness to accept this next level of responsibility shows your true character and you all deserve a sincere congratulations,” said Chief Todd G. Raybuck. “Please know that every last one of us, including your loved ones, are here to support you and help you succeed on this new path. I have no doubt you’re going to be upstanding leaders in this organization.”

Banquel was hired at KPD in 2005. He has served a multitude of roles throughout his time at KPD. He was promoted to the rank of sergeant in 2016 and was assigned to the Patrol Services Bureau, Platoon 1, Līhuʿe District. In 2019, he transferred to the Administrative and Technical Bureau’s School Resource Officer Unit to serve as the School Resource Officer Unit Sergeant. He transferred to the Investigative Services Bureau Special Focus this year and was assigned to the Līhuʿe District as the Property Crimes Detective.

Candido was hired at KPD in 2012. His various assignments have included Hanalei Patrol Officer, Līhuʿe Patrol Officer and Field Training Officer. Candido is currently in VICE/Narcotics.

The Master of Ceremony for Thursday’s event was Captain Roderick B. Green. The pinning of the badges was preceded with a blessing by Police Chaplain Jade Waiʿaleʿale Battad and speeches by Kauaʿi County Managing Director Michael Dahilig, who was representing Mayor Derek S.K. Kawakami, as well as Raybuck.

“You, in reality, are the next generation of leaders for KPD — and with this leadership rank, your new frame of mind, your new way of thinking, new approaches to solving problems, and new life perspective will start shaping this department almost immediately,” Dahilig said. “As your skill as police officers and your role as men of the law evolves, so too will be your role as a leader for this storied institution.”