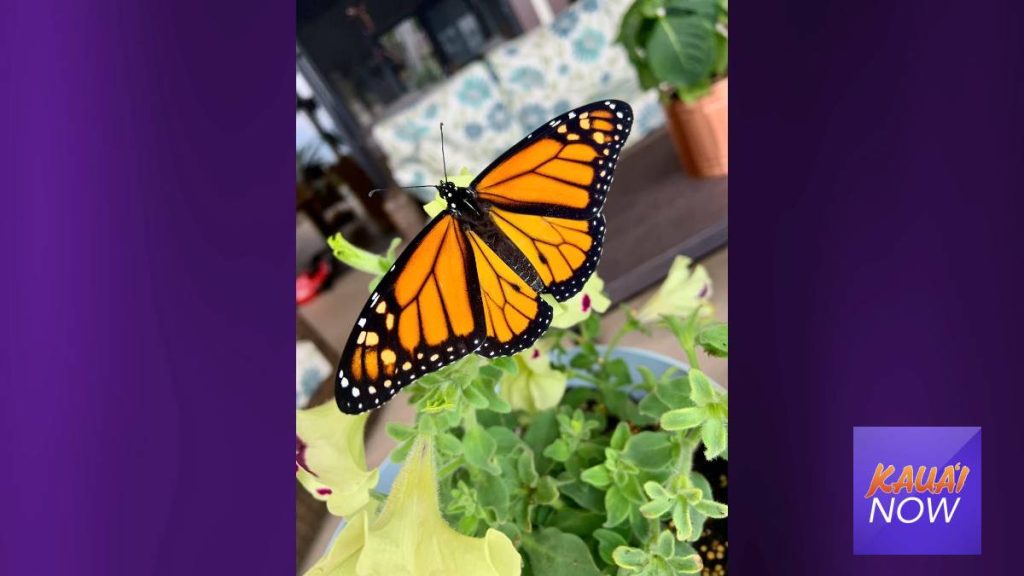 In December 2020, the U.S. Fish and Wildlife Service stopped just short of declaring the monarch butterfly a threatened or endangered species because the migratory populations of the regal insect on the mainland have significantly declined.

But the second most popular butterflies in Hawai‘i are fairing well.

Daniel Rubinoff, a professor of entomology at the University of Hawai‘i-Mānoa who works on insect conservation, evolution and invasive species, is not aware of problems with other monarch populations around the globe, including those throughout the islands. However, he is not aware of anyone monitoring the Hawaiian populations.

He said the monarch butterfly, Danaus plexipus, is widespread. The insect occurs naturally from northern South America to Canada and has been introduced in Hawai‘i, Tahiti, the Mariana Islands, New Zealand and Australia. The monarch has been in the islands since being introduced here in the 1840s.

“The monarchs in Hawai‘i are doing fine,” said Rubinoff.

Experiences of people on the Big Island and Kauaʻi who raise or monitor monarchs reiterate Rubinoff’s words.

“In my neck of the woods, in Kona, spring started out with a bang,” said Elizabeth Weintraub, a resident of Kailua-Kona who raises the butterflies at her home. “Production went well through the spring, but once summer appeared, everything came to a halt.”

Weintraub said caterpillars started dying from a viral infection and signs of predators invading chrysalises began appearing. She added many of the insects she was caring for died prior to pupating. So she took a break.

“Come September, after the rains stopped, production began to increase again,” Weintraub said, and it has been nonstop since. “It’s like a total flip from this summer.”

As of Thursday, Dec. 2, Weintraub, a Minnesota native who was fascinated by the monarch butterfly while growing up in the Midwest, had 56 chrysalises. She hadn’t counted the number of caterpillars she had, but estimated it to be at least another 80-100.

Vicki Mion, a Kauaʻi resident and one of the administrators of the Monarch Butterfly Friends Hawaiʻi Facebook group, is use to seeing an abundance of butterflies flying around her yard, including monarchs.

And while the butterflies are famous for their migrations on the mainland, Rubinoff said it’s unknown whether they migrate between the Hawaiian Islands, but it’s likely. Mion also wouldn’t count the possibility out.

“We’re a closed system here,” she said. “Each island is basically a closed system. So I doubt very much that migration happens, even from island to island. That being said, monarchs can fly thousands of miles over the water. So I never want to say never when a monarch is concerned because they will always fool you.”

As long as there is a host plant available for them, the monarch will likely continue to be a Hawai‘i staple. Rubinoff said the monarch is the most recognized butterfly in the state. The enjoyment of the butterfly is something Weintraub and Mion attributed to the flying insect’s cycle of life.

“I don’t know why people enjoy monarchs, but if I were to venture a guess, I’d bet it goes back to simpler times, such as one’s childhood, when the mere sight of a monarch butterfly was a magnificent experience,” Weintraub said. “It is also astounding, and I never get over the metamorphosis of how a caterpillar can turn into a butterfly.”

Mion said there’s just something about the orange-and-black butterflies that enthralls people.

“It’s got to be the metamorphosis,” she said. “That funny-looking caterpillar turning into that pretty chrysalis, turning into that beautiful butterfly. And on top of that, the interesting migration. It just catches people’s attention and just takes away that veneer of adulthood, if you will, for a minute and they just get to experience joy, pure joy, just for a moment. And it’s lovely to watch.”

“They flutter in erratic patterns, and they will land on you if you look like a flower,” she said. “Children, especially, are delighted by monarchs, and many of us are still children inside.”

A recent NPR story reported that in the 1980s and ’90s, more than a million of the regal insects from throughout the western United States made the trek to coastal California each year during their annual migration. But in recent years, those numbers plummeted more than 99%.

Scientists have noted declines in North American monarchs overwintering in Mexico and California throughout the past 20 years. The U.S. Fish and Wildlife Service said in December 2020 that the western population saw a massive decline from about 1.2 million in 1997 to fewer than 30,000 in 2019.

“We are committed to our ongoing efforts with partners to conserve the monarch and its habitat at the local, regional and national levels,” said U.S. Fish and Wildlife Service Director Aurelia Skipwith in December 2020. “Our conservation goal is to improve monarch populations, and we encourage everyone to join the effort.”

Anyone who has specific questions about how to get their local government, churches, libraries, clubs and other organizations involved with helping the monarch continue to thrive in the state can contact Mion at vickimion1@gmail.com. She also encourages people interested in the butterfly, including raising them, to join the Monarch Butterfly Friends Hawaiʻi group on Facebook.