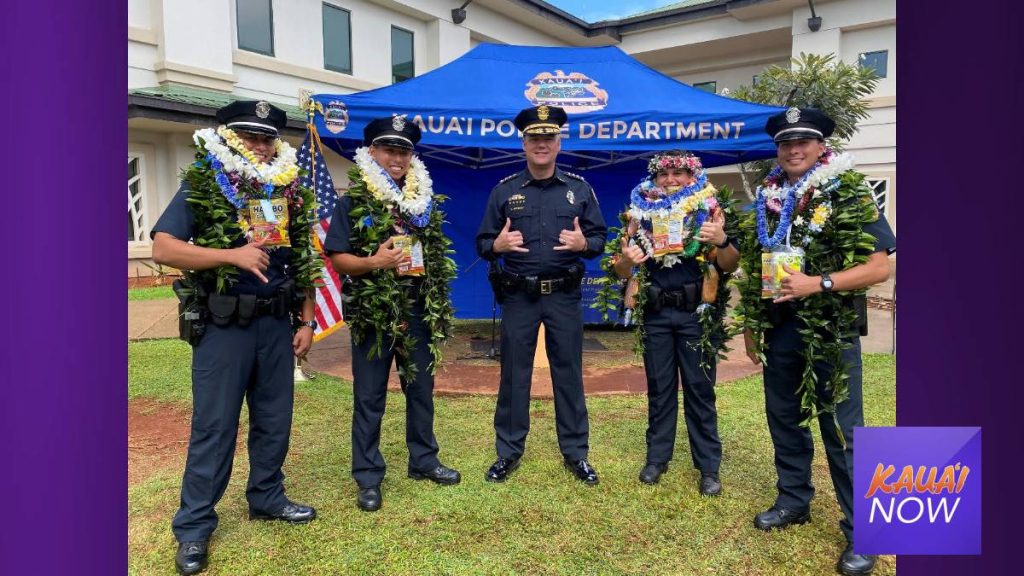 “It’s fitting that in this season of giving, we are here to mark the commencement of careers where four in our community have chosen to give of themselves to public service,” Dahilig said during the ceremony. “To this class, while you are the rookies in our force and the newest on scene, you are now nonetheless leaders in our community. Remember, as a leader you must keep yourself humble, listen first, be empathetically firm, be caring and compassionate, and remember that this job of service at its core is not about you but about your fellow neighbor.”

“One of the greatest rewards of my job is having the opportunity to interact with the recruits and watch them as they progress from their first day, the days of navigating through their training and finally reaching the goal they have worked so hard for ̶ to receive their badge today,” Raybuck said. “As you enter and navigate the career ahead of you, remember the experiences you gained during your training and continue your commitment to serve others, strengthen relationships with those we serve and focus your efforts toward enhancing the quality of life in our community.”

Enrique was born and raised on Kauaʿi. She graduated from Kapa’a High School and is a graduate of the University of Hawaiʿi at Mānoa. Prior to joining the police department, she was a teacher, most recently with Kamehameha Schools. Although she enjoyed her career in education, she decided that a career in law enforcement would have more of a direct impact on her community.

Ilae was born on Kauaʿi. He attended Kamehameha Schools. He furthered his education at Honolulu Community College and graduated with an associate degree. During his time at UH, he worked as a pool lifeguard at Kalihi Valley District Pool before returning home. He worked at Hawaiian Airlines on the RAMP as a baggage handler for a little over a year before joining KPD.

Minia was born and raised on Kauaʿi. He graduated from Waimea High School. He later went on to graduate from the University of Hawaiʿi at Hilo with a bachelor’s degree in Administration of Justice and Political Science. After college, Minia worked for the Thrifty Mini Mart in Kekaha and then went on to work for the Transportation Security Administration before finally joining KPD.

Wakano was born on Kauaʿi. He graduated from Kauaʿi High School and went on to attend Kauaʿi Community College, where he attained an associate degree in liberal arts. Wakano worked at a construction and architect company for five years before deciding to join KPD. He enjoys playing volleyball, exercising, and being with his friends and family.

Special awards were presented to three recruits during the ceremony. Enrique received the Physical Fitness Award for demonstrating a high level of physical abilities on a consistent basis during their training. Wakano received the Marksmanship Award for an outstanding skill level in firearms proficiency and safe handling. Enrique was also honored as the Most Outstanding Recruit for excelling in all areas of the rigorous training while building camaraderie in the group.

The graduation began with an invocation by Police Chaplain Gregory Poole and concluded with the ceremonial pinning of badges by household family members, followed by the recruits taking a police officer oath in front of the audience.

During the ceremony, the recruits expressed gratitude toward their families and fellow classmates for their support, as well as their training cadre, including Sergeant Alan Santella and Sergeant Len Nitta, for their wealth of knowledge and expertise.

The police recruit graduation ceremony is the culmination of six months of classroom and reality-based training. Following graduation, each police services officer was assigned a field training officer to shadow for the next four months. Upon successful completion of the 16-week program, the officers will be released from training to assume patrol assignments.

For more information on becoming a Kaua‘i police officer, visit KPD’s website at http://www.kauai.gov/police or call 241-1646.