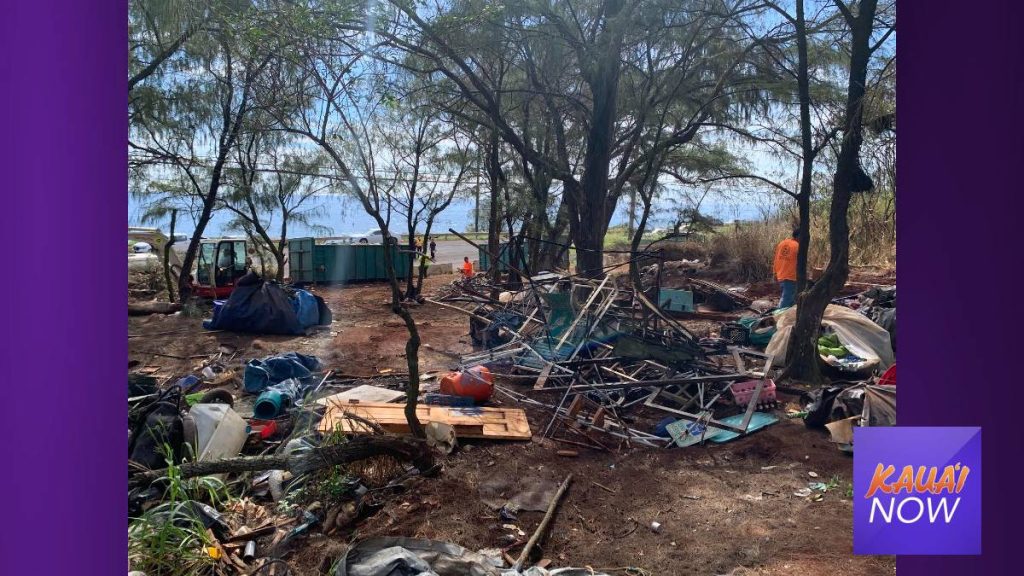 The Kauaʿi Police Department, along with the help of numerous local and state entities, made strides recently in reducing crime-related activity at the Kaiakea encampment across from the Kealia Kai lookout, officials stated Tuesday, Nov. 30.

The Kaiakea Cleanup Project 2021 was initiated by KPD earlier this year due to the encampment being the site of multiple crimes since 2020, according to a KPD press release. The project spanned over the course of several months and included the removal of more than 500 used syringes, as well as numerous used Narcan applications and many empty crystal methamphetamine baggies.

“This was a priority location for several reasons, among them being illegal drug activities that involved using and selling heroin, crystal methamphetamine and more recently, fentanyl,” said Investigative Services Bureau Detective Barry DeBlake. “KPD was also able to verify the location as the site of at least two overdose incidents where Narcan was administered by individuals within the encampment to save both people. There were also two fentanyl-related deaths linked to this location, one involving a person who frequented the encampment and another that occurred near the area.”

Additionally, police say the community raised concerns about how dangerous the encampment was for motorists traveling south on Kūhiʻō Highway. The area, which is adjacent to a blind curve in the roadway, made it difficult for drivers to see people and vehicles leaving the encampment.

The Kaiakea Cleanup Project 2021 is in keeping with Chief Todd Raybuck’s Crime Reduction Goals for 2021.

The first phase of the project involved Varner and her team visiting the encampment multiple times to offer the houseless resources and assistance.

During that time, meetings took place between several agencies as to what would be the best way to take care of the encampment and what role each agency would play during the cleanup.

One of the many steps involved in the large-scale project was obtaining all of the proper approvals due to the encampment’s location on COK and DOE properties. Some of the other tasks included agencies providing heavy equipment and various other tools to help support the cleanup, while KPD handling the law enforcement portion of the project.

“A special thanks go out to all the partnering agencies for their help on making this so successful,” DeBlake said. “The Kaiakea Cleanup Project has already shown a reduction in criminal activities that would not have happened without the help of everyone involved.”