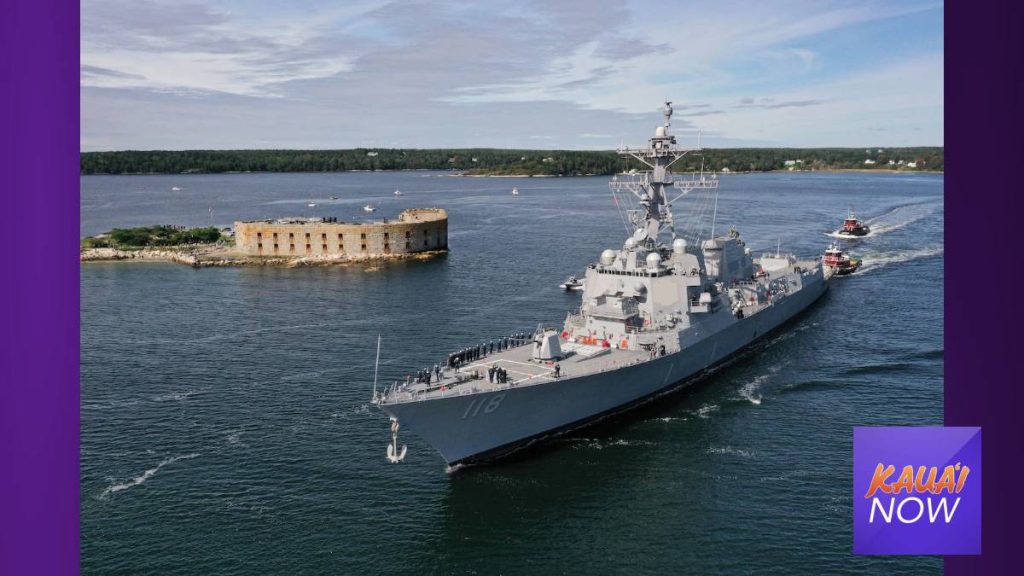 The future USS Daniel Inouye (DDG 118) is scheduled to arrive at its new homeport, Joint Base Pearl Harbor Hickam on Thursday, Nov. 18, following a two-day voyage around the Hawaiian Islands.

As the newest Arleigh Burke-class destroyer, Daniel Inouye is scheduled to be commissioned on Dec. 8, 2021, one day after the 80th Anniversary of Pearl Harbor Remembrance Commemoration. The ship is scheduled to pass Nawiliwili Bay for its “Honoring the Islands” tour on Nov. 17 at approximately 9 a.m.

This voyage around the islands pays tribute to the memory and legacy of the late Sen. Daniel K. Inouye and his lengthy career of service to the people of Hawaiʻi.

The ship will also pass by Hilo Bay, Hawaiʻi Island, and Kahului Bay, Maui, giving residents the opportunity to see the Navy’s newest ship as it transits to Oʻahu.

The ship is named in honor of Daniel Inouye, who served as a United States Senator for Hawaiʻi from 1963 until his death in 2012. He was awarded the Medal of Honor on June 21, 2000, for his extraordinary heroism in action with the U.S. Army while serving as a member of the 442nd Regimental Combat Team in Italy during World War II.

Arleigh Burke-class destroyers are multi-mission ships able to hold targets on land, at sea, in the air, and underwater at risk with a suite of sophisticated weapons and sensors.

PVS Crew Discover Parts of Shipwreck at Lalo
Young Navigators to Set Sail in Voyaging Canoes, Train for Future Journeys
OP-ED: We Can’t All be Heroes, But We Can All Wear Masks
ADVERTISEMENT