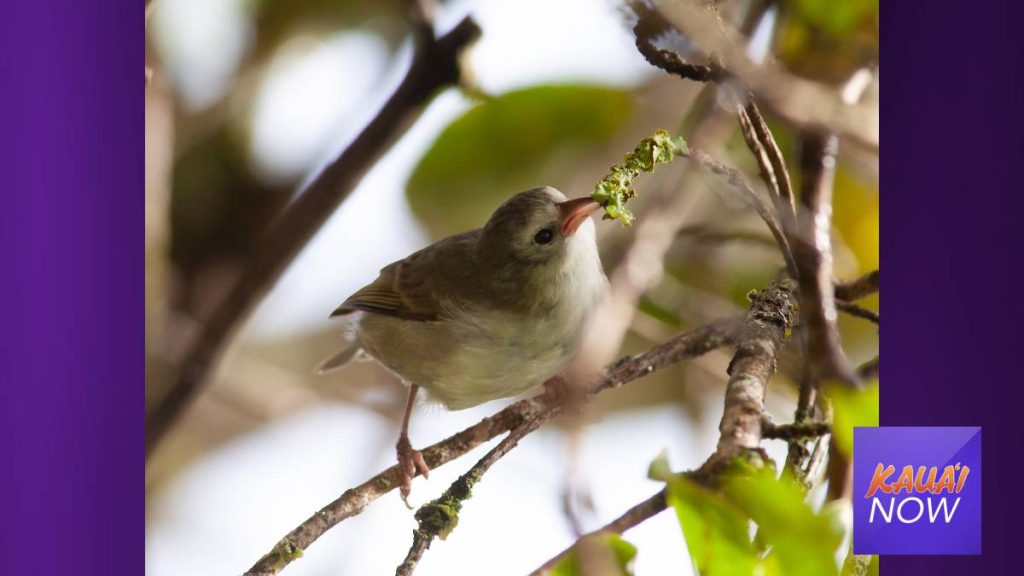 The population of an endangered forest bird at Halehaha, a field site in the central mountains of Kaua’i has nearly disappeared.

According to a press release from DLNR, biologists monitoring the ‘akikiki discovered the more than 70 birds recorded in 2015 has dropped to five as of this year. The new data, combined with data from other field sites on Kauaʻi where ʻakikiki numbers appear more stable, suggest that Halehaha is currently unsafe as a habitat for ‘akikiki.

Now, the Kaua’i Forest Bird Recovery Project (a partnership with DLNR and the University of Hawai’i Pacific Cooperative Studies Unit) is seeking to protect the remaining birds at Halehaha by moving them temporarily to a breeding program on Maui.

“At Halehaha, that once-ideal forest is currently out of balance due to the proliferation of invasive species,” the release states. “Surveys at the site have shown a recent increase in invasive mosquitoes that carry avian malaria and other diseases. Moving the remaining birds is a decision of last resort, and likely the only way to keep the population from death.”

The proposed rescue mission, unanimously approved Friday, Nov. 12, by the Board of Land and Natural Resources, highlights a difficult challenge in avian conservation: maintaining the existence of native species when the ecosystems those species rely on have degraded.

In an ideal world, officials say the best location for ‘akikiki to thrive would be in their home forests.

The interisland transfer of Halehaha’s remaining ‘akikiki is intended to be temporary while biologists work to restore the birds’ forest habitat. Cultural practitioners are coordinating with project staff to provide protocol for both the birds’ departure from Kauaʻi and their arrival on Maui at a facility managed by the San Diego Zoo Wildlife Alliance.

“The transported ‘akikiki will be in good company on Maui, where the breeding program is already home to roughly 40 ‘akikiki, hatched from eggs collected during previous rescue operations,” the release states.

The Kauaʻi Forest Bird Recovery Project has previously worked with Ka ʻImi Naʻauao O Hawaiʻi Nei Institute, a Kauaʻi-based group that has provided blessings for the project’s fieldwork. Dawn Kawahara, the institute’s President, commented that the plan “seems to be aligned with what we know and promoting native Hawaiian thought regarding protecting and preserving all life.”

As experts at the Maui breeding facility care for the rescued birds, biologists on Kauaʻi will continue to monitor ʻakikiki remaining in the wild at field sites other than Halehaha. They are also collaborating with experts statewide on developing solutions to restore Hawaiʻi’s native forests as a home for native birds.

The Birds Not Mosquitoes partnership, which includes DLNR and Kauaʻi Forest Bird Recovery Project as members, is currently focused on the potential for a bacterium to act as a mosquito birth control. The tool, also known as Incompatible Insect Technique (IIT), is one of several that biologists could use to reduce the impacts of invasive species. With their forests in better condition, experts foresee a future when Halehaha’s ʻakikiki complete their interisland stay and return home.