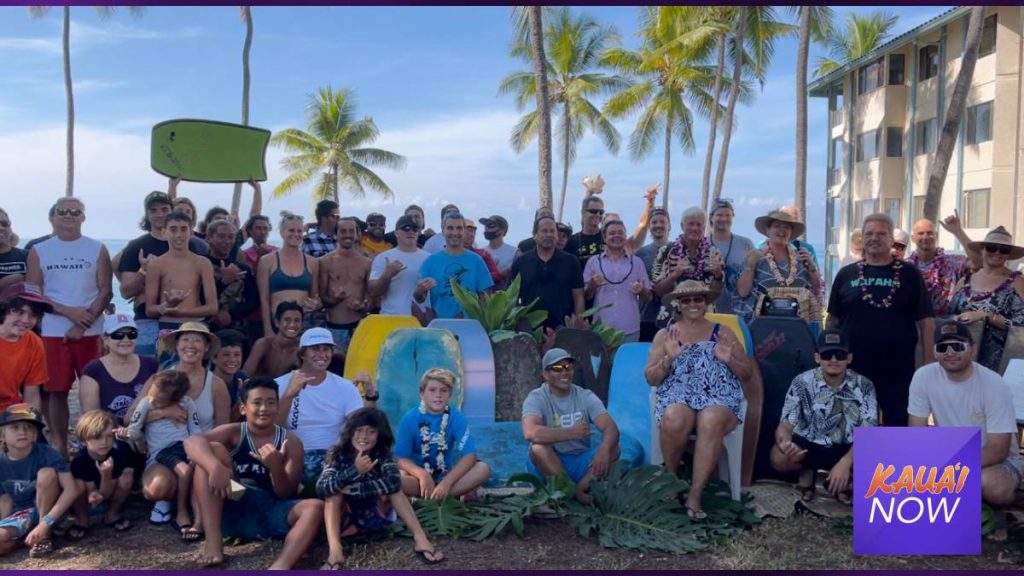 Hawaiʻi Island’s wave-riding community gathered this morning at Waiʻaha Beach Park to celebrate the life of the late Thomas Hugh Morey, creator of the modern-day bodyboard.

Saturday’s event was a blessing ceremony for a newly unveiled historic marker at the Kona beach, also known as Honl’s Beach Park, as the birthplace of modern-day bodyboarding on International Bodyboarding Day. The blessing was followed by a paddle-out in honor of Morey, who passed away a few weeks ago.

Eleven-time Pipeline champion Mike Stewart spoke to the crowd, thanked them for coming and collecting at this “ground-zero for bodyboarding.”

“This is where it all started for Tom,” Stewart said. “It’s a universal feeling of love that I really think he wanted to share with everybody, and I think through this simple piece of foam he’s done just that.”

Stewart was living in Kona as a teen and worked with Morey on early surfing inventions like leash plugs. The bodyboard champion said Morey meshed modern materials with simplistic ingenuity that was transformative to wave-riding.

“His open-mindedness allowed space for him to create what he did,” Stewart said of his mentor and father figure.

Bodyboarders of all ages came out to celebrate Morey’s life and contributions to the sport.

“The love that he got, he shared for us to do the same for the keiki coming up with friends and family, and I mean, that’s what matters,” Stewart said.

Eli Arce started bodyboarding at around 1975 with a piece of styrofoam. He recalled the first time he got a real bodyboard a few years later, saying it changed his life.

“The love of the ocean was born,” Arce said.

The 51-year-old added all of his relationships are because of bodyboarding.

Robby Poznansky said when he first saw the bodyboard that Morey had developed he was really pretty skeptical. Looking back, the 68-year-old man said Morey’s creation goes beyond bodyboarding.

“It was the gift of having fun and experiencing camaraderie and introduced a lot of people who didnʻt see themselves as surfers or ocean people and gave these people the ability to go out into the ocean and have fun safely and share that experience with everyone else,” Poznansky said.

Young bodyboarder Daniel Mast was among those that paddled out with the group. He said he came to celebrate Morey. Daniel said the day was special as he got to hang out with friends and get an autograph from Stewart.

“We have such a diverse group — all ages, men and women, whose lives have been positively impacted by the bodyboard,” Villegas said, remarking on the crowd gathered at Waiʻaha. “It’s a celebration of a phenomenal life and a sport that is so inclusive and incredible.”

On top of being International Bodyboarding Day, Villegas said, it’s also the 50th anniversary of the creation of the bodyboard.

“There are so many serendipitous reasons to celebrate today,” the councilwoman said.