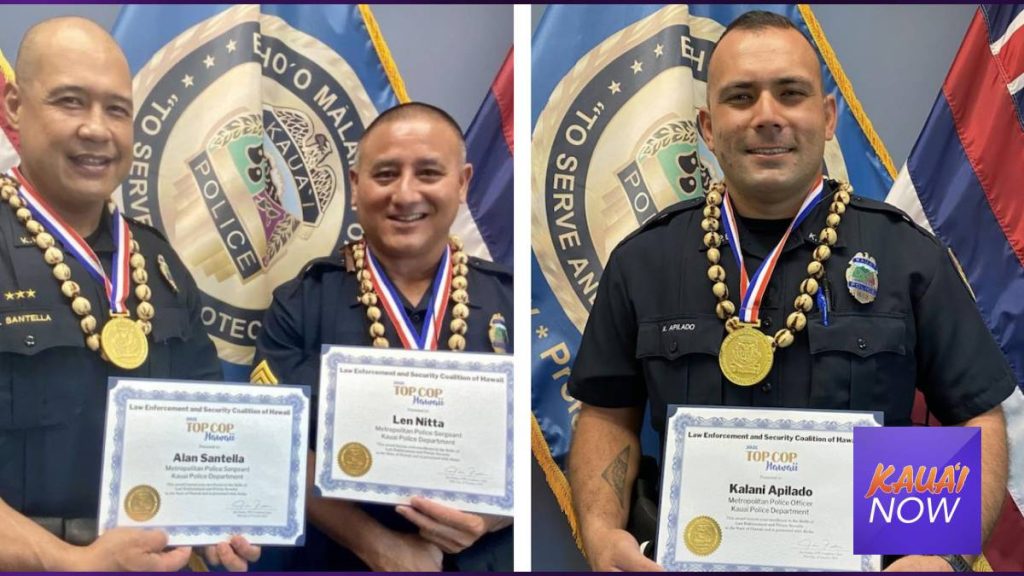 Three Kauaʻi Police officers were recognized as “top cops” by the Law Enforcement and Security Coalition of Hawaiʻi.

Santella and Nitta were recognized as KPDʻs 2020 Top Cops since the ceremony was not held in 2020 due to COVID-19. Santella and Nitta are responsible for the training and recertifying of KPD employees consisting of 154 sworn and 54 civilian personnel.

“The occupation of a police officer is a challenging job because of the ever-changing landscape. Police officers have had to adapt to a myriad of changes, often times on short notice, requiring law enforcement to make policy adjustments and to train their officers accordingly,” said ATB Lt. Ken Cummings. “Sergeants Santella and Nitta have been directly responsible for the training of KPD’s new hires and incumbents alike, and continuously exemplify the meaning of a top-notch officer.”

Santella and Nitta were lead instructors for the 91st, 92nd and 93rd Recruit classes where they trained a total of 25 new Recruits in skills, such as Defensive Tactics, Taser, OC Spray, firearms (pistol, shot gun and rifle), Non-Emergency Vehicle Operations (NEVO) and EVOC, and Unknown/High Risk vehicle stops ̶ a combined total of 69 weeks or 2,760 instructional hours.

Moreover, the release states, Santella is a long-time member of KPD’s Special Response Team (formally known as SWAT) and is currently the interim SRT Commander ̶ a position usually held by a lieutenant, while Nitta recently retired from the SRT team after serving as a team member for 20 years.

Apilado was recognized as KPD’s 2021 Top Cop. He has been with KPD for approximately five years and is currently assigned to the Līhuʿe District, 2nd watch.

Some of Apilado’s accomplishments within his last evaluation period include writing and serving 29 search warrants on vehicles and property related to drug cases. He also recovered a total of 35.35 grams of methamphetamine, 61.3 grams of marijuana, 3 grams of heroin, $2,008 in US currency, $960 in counterfeit US currency and one illegal firearm.

“During his short time with KPD, Officer Apilado has become a leader in drug enforcement and traffic enforcement,” said PSB Lieutenant Scott Brede. “He has demonstrated his commitment to keep our families, streets, communities, and island safe from drugs and other dangers.”

According to the release, Apilado was also responsible for issuing 557 traffic citations, 28 arrests for Operating a Vehicle Under the Influence of Intoxicants, 96 felony arrests, 311 misdemeanor arrests and 114 bench warrant arrests.

Additionally, Apilado was selected to become a Field Training Officer in PSB to help train new officers and he has attended numerous trainings within the field of law enforcement. Apilado is also enrolled with the University of Phoenix and is working on his Bachelor of Science in Criminal Justice Administration.

In addition to his hard work in law enforcement and to further his education, Apilado is currently serving with the Army National Guard and has been for the past 11 years.

To learn more about Top Cop Hawaiʿi and to watch the ceremony, click here.