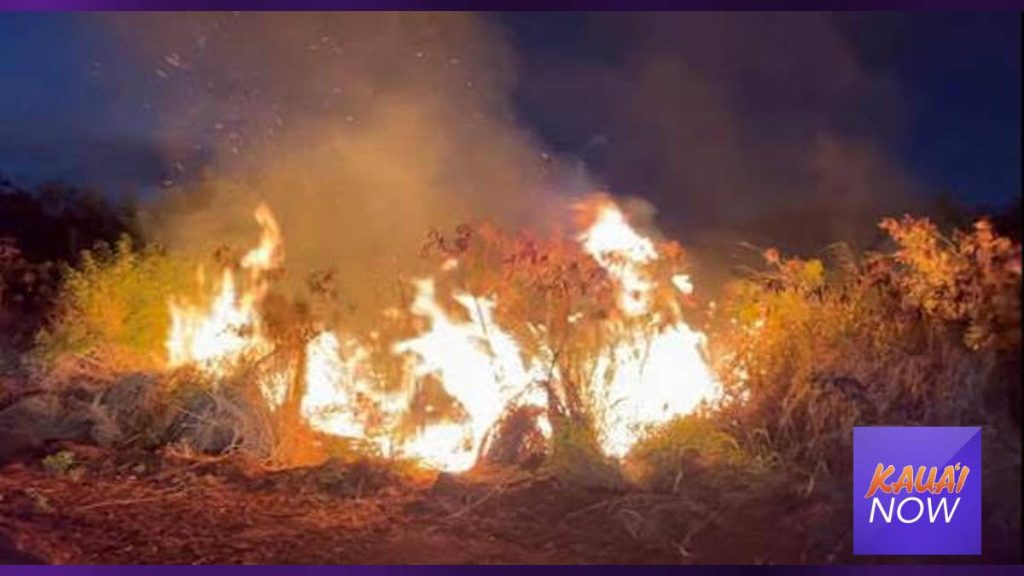 No injuries were reported after a 40-acre brush fire broke out in Anahola Tuesday, Oct. 26.

Kauaʻi Firefighters have since extinguished the blaze. While the flames were near the controlled burn conducted in Anahola today, Oct. 27, officials say, the fires were not connected. As of this afternoon, crews are putting out the last remaining hot spots of the brush fire and will continue to monitor the area.

Firefighters were initially dispatched to the brush fire at approximately 5 p.m., which was burning along the makai side of Kūhiʻō Highway near mile marker 12. Personnel with the Kaiakea fire station, Tender 1, Rescue 3, KFD Fire Prevention Bureau, and the on-duty Battalion Chief responded to the incident.

According to a preliminary report, crews arrived on scene and discovered fires burning in multiple sections. Multiple fire breaks that were recently cleared in the area by the Kaua‘i Fire Department and the Department of Public Works assisted in controlling and managing the fire.

Truck 8 was situated on the north side of the area to put out fires. Prevention 1 personnel arrived shortly after to monitor the southern area. Truck 3 and Rescue 3 were stationed at the south end to put out hotspots. After that, Prevention 1 in Truck 2 backburned the south end of the site with Truck 3 and Rescue 3. Firefighters monitored for any embers jumping over fire breaks.

After a couple of hours, the fire was deemed under control. However, Truck 8 encountered a new fire. Truck 8 and Engine 8 used approximately 1,900 gallons of water to extinguish that fire.

Firefighters remained at the site to monitor for hotspots and cleared the scene at 2:40 a.m.

No injuries were reported, and no structures were threatened. The cause of the fire is undetermined.

Additionally, the prescribed burn, which was previously scheduled, is nearly completed.