Discovery of Nearly 2 Pounds of Methamphetamine Leads to 2 Arrests 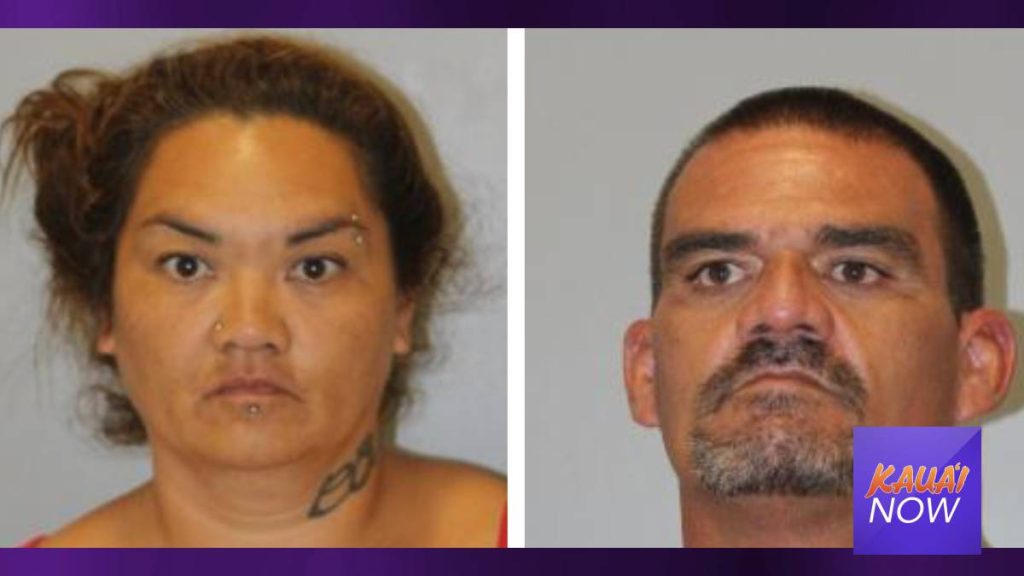 A man and woman were arrested after a search on a residence in Kalāheo yielded the recovery of about two pounds of methamphetamine along with other illegal drugs and firearms.

Matsusaka and Kapahu were arrested and charged for first-degree promotion of a dangerous drug in the First Degree. They were released pending investigation.

“Kauaʿi police are aware of the continued distribution and use of hardcore, illicit drugs around the island,” KPD stated in a press release Friday, Oct. 22. “These substances have been leading to premature deaths as toxicology findings have found mixtures of meth, heroin, cocaine and fentanyl in deceased individuals.”

So far this year, KPD reports there have been two confirmed and two suspected deaths (pending toxicology results) due to an overdose of synthetic opioids, which includes fentanyl.

KPD personnel are trained on the proper use of Narcan, a nasal spray that is used in emergencies to treat suspected opioid overdoses. Police officers carry it with them while on patrol.

Since an incident on Sept. 22 when two women’s lives were saved due to the use of Narcan at Kapaʿa Ball Park, Kauaʿi police have used Narcan on at least three other occasions.

Kauaʿi police have also made more than six arrests related to the illegal distribution of fentanyl over the past 60 days.

During the same period of time, police recovered approximately 250 grams of methamphetamine, 10 grams of heroin (equal to 100 dosage units), 200 suspected counterfeit tablets labeled oxycontin but presumptively tested as fentanyl and 1.5 grams of fentanyl.

“To put it into perspective, it only takes 2 milligrams of fentanyl to cause a lethal dose, which means that 1.5 grams equates to about 750 lethal doses of fentanyl,” said Chief of Police Todd G. Raybuck. “We can’t reiterate enough just how dangerous this drug is. We really want to encourage everyone to be aware of the signs and symptoms of an overdose so that you can take action if needed.”

Illegal fentanyl is either intentionally ingested or is laced in batches of other drugs, such as cocaine, heroin and methamphetamine. It’s most commonly found in its powder form and is inhaled, ingested or injected.

Some of the results of an overdose include the recipient acting as if in a stupor with a reduced level or loss of consciousness, pupillary size changes, nausea/vomiting, limp body, cold and clammy skin, coma and/or respiratory failure. The DEA notes that the presence of a triad of symptoms such as a coma, pinpoint pupils and respiratory depression are strongly suggestive of opioid poisoning.

“If you or someone you know should experience any of these symptoms and need help, please do not be afraid to call 911,” Raybuck said. “We are focused on saving lives and not pursuing criminal charges for people in a medical crisis.”

For more information online and for resources to help with substance abuse, visit the State of Hawaiʿi Department of Health Alcohol and Drug Abuse Division at https://health.hawaii.gov/substance-abuse/, https://health.hawaii.gov/substance-abuse/prevention-treatment/ or visit McKenna Recovery Center at http://www.mckennarecoverycenter.com/lihue-kauai.

To report any suspected illegal use and/or distribution of fentanyl, call KPD Dispatch at 808-241-1711. For those who wish to remain anonymous submit a tip to Crime Stoppers Kauaʿi at http://www.cskauai.org.