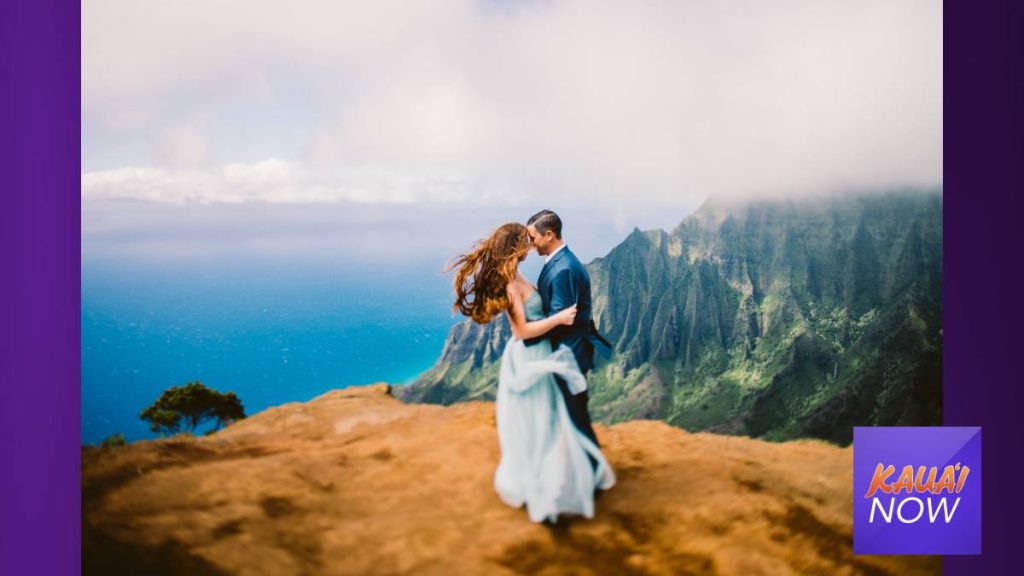 The Department of Land and Natural Resources (DLNR) issued cease-and-desist orders to two photography businesses that officials say are failing to obtain proper permits to shoot weddings in state parks.

Bradyhouse Photographers and Foxes Photography have captured images of couples saying “I dos” in some of the most breathtaking locations on Kauaʻi. Both businesses say any issues that DLNR might have with their work is an honest mistake.

Sue Kanoho, executive director of the Kaua‘i Visitors Bureau, said any photo or video shoot thatʻs a commercial activity requires written permission from DLNR and a film permit from Hawai‘i State Film Office on Kauaʻi. Drone footage is illegal in state parks for everyone.

“It’s not fair to photographers who are making a living following the rules,” Kanoho stated in a press release from DLNR.

Meg Bradyhouse, founder and photographer of Bradyhouse Photographers on Kauaʻi, told Kauaʻi Now News they were visited by a local DLNR officer earlier this year who explained they needed permits if they wanted to work commercially at certain locations, which she says the company was unaware of at the time.

In DLNRʻs review of Bradyhouse Photographers website and social media accounts, they report images from Kalepa Ridge, Wailua Falls, drone shots in Waimea Canyon and Kōkeʻe State Parks, as well as from Hanakāpīʻai Beach and Honopū in the Nāpali Coast State Wilderness Park.

“Many of these places are both naturally and culturally sensitive and we would not be issuing permits for commercial drone operations or wedding photos in these sensitive locations,” DLNR Division of State Parks Administrator Curt Cottrell stated in the DLNR release.

Since being contacted with DLNR in January, Bradyhouse said they’ve made efforts to educate themselves on obtaining the required permits for every single session for the last 10 months, of which theyʻve been approved every time.

Per records from the Hawai‘i State Film Office, Bradyhouse applied for and was issued a total of eight photo permits between May and September this year, including an Open and Accessible Permit which details legal photography locales, which photographers may use, without additional permitting, for defined time-periods. That permit expires later this month.

“We have made a zero exception policy after speaking with the DLNR to shoot at places such as the Kalepa Ridge, Wailua Falls and Hono’opu as they are not permitted and we (will) not be shooting at these places in the future,” Bradyhouse stated. “We are doing the best we can to make sure we are being respectful and compliant with the permitting requirements and have adjusted our location guides, client process and education as well as our team structure.”

Bradyhouse was shocked at the news of the cease-and-desist order since their company has been working with DLNR and the film office every week since January, she explained.

“We plan to continue to educate other photographers on the process as well as continuing to shoot only with the required permits moving forward,” Bradyhouse stated. “…We regret that before knowing better we were once part of the problem but we believe people do better when they know better and we are thankful for the opportunity to do just that,” Bradyhouse said.

In the last five years, Foxes Photography has shot a total of five elopements on Kauaʻi. The company confirmed they had taken photos at Wailua Falls, but the shoot happened years ago before they knew the trail was off-limits.

“It was an honest mistake and we have not been back there since,” Foxes stated in a release to Kauaʻi Now. “After learning about our mistake, we removed it from our webpages and social media but forgot it was also in our Kauaʻi guide blog post because that is an old post. We have since taken it down there as well.”

Foxes shoots in state and national parks across the country. Any images Foxes had of Kauaʻi on its social media or website have been removed.

“One thing that so many people don’t realize is that our couples are not out here just for pretty photos with a cool backdrop,” Foxes stated. “It’s so much more than a film production or a commercial photoshoot or a way to make money. It’s about the entire experience of adventuring and marrying your best friend in a place that feels as special as the love you have for each other.”

Itʻs not just Bradyhouse or Foxes that officials say are breaking the rules. For years, Kanoho has fielded complaints against photographers for not obtaining the proper permits.

“We have photographers flying in from the mainland and inter-island breaking the rules as well, looking for the cool shot,” Kanoho told Kauaʻi Now. “Everyone’s got into ʻwhat I can do for social media that’s awe-inspiring,ʻ and it’s gone way too far.”

“Renegade photographers create unhealthy expectations for visiting couples as they see photos online or on social media and they’re asking our members to shoot in the same places,” stated association president Mike Danderand. “There are places on Kaua‘i that are sacred or dangerous. Our members agree to honor and respect cultural sites.”

The association reports members have lost significant business to un-permitted photographers when couples insist on locations, they see on social media…where images were illegally taken.

Kanoho said people need to know what is required of them by the state and county in order to conduct business, citing specifically wedding photography and beach massages.

“I’m all for the wedding industry and romance industry,” Kanoho said. “I’m just asking you to be legal and pono. Within reason, totally support it.”

Kanoho would like to set up a Zoom call with anyone who hopes to conduct commercial business on a Kauaʻi beach or in a state or county park. She said the conversation would be about how people can better educate themselves and follow the rules.

“If people continue to abuse it, it could be taken away,” Kanoho said of the limited commercial permits that are available on Kauaʻi. “We don’t want to lose what we have so far.”

Film permitting is handled by jurisdiction, whether state or county, and requires approval by the government agency with jurisdiction over the location. The 65-member Kaua‘i Wedding Professionals Association can help member photographers navigate what’s needed.

In a statement from Foxes Photography, they suggest starting a conversation amongst DLNR and the Hawai’i Film Permitting office to find a pathway for access for some of Kauai’s most popular hiking trails that thousands of tourists enjoy legally every year.

“Because what we’re doing with couples out on these trails is really no different than what the average hiker does,” Foxes stated.

According to DLNR, photography companies receiving cease-and-desist letters could face criminal or civil citations, which can carry fines of thousands of dollars and potential jail time.

“If you are ignoring the rules for a commercial advantage, the evidence is on your websites, and the law will catch up with you,” Cottrell said. For couples wanting to get married on Kaua‘i, we encourage you to simply ask if your wedding photographer is a member of the professional association. They may not be able to get you to the exact spot of the likely unauthorized photo you saw, but they do know exactly where it is legal and appropriate and where it is not, due to culturally or naturally sensitive resources that are out of bounds…But hey its Kaua‘i, so pretty tough not to get amazing photographs no matter where.”