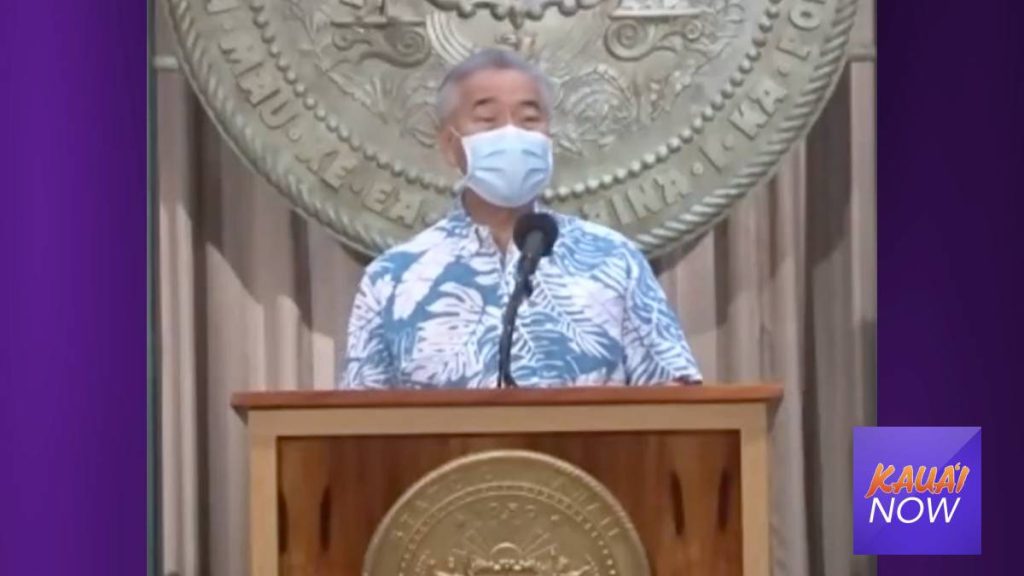 A rollback of some COVID-19 restrictions is coming soon in Hawai´i, though what exactly that will look like remains unclear.

Governor David Ige on Thursday, Oct. 7, 2021, announced via his social media accounts that he planned to take action to limit regulations by the end of this week. He said the decision is possible due to the decline in new infections identified daily and the resulting decrease in hospitalizations.

As of Thursday, the state’s seven-day average was 222 new cases daily, with a test positivity rate of 3.2%. That is down from a daily average that eclipsed 900 new infections for a brief time in early September. A total of 20 patients were hospitalized on the Big Island due to COVID-related illness Thursday, down from a previous high of near 80 approximately one month prior.

“While tough, restrictions helped ease some of the burden our hospitals were facing as we neared capacity in many facilities,” Ige posted to his official Instagram account. “It was a frightening prospect for many who worried their loves ones wouldn’t get the care they needed when they were admitted to our hospitals.”

“Now that we’re seeing a lower number of cases and hospitalized patients, I’m optimistic that by the end of this week we can announce that we will begin lifting some of those restrictions while keeping the health and safety of our loved ones a top priority,” the governor continued. “I know many of you are ready to get back to normal, and we’re taking steps to get there.”

Changes to Expect, and Not to Expect

Ige finished the post with the promise of updates to be made “soon.” But the particulars the governor did not clarify are perhaps what Hawai´i residents and prospective visitors want to know most — just what precisely is going to change?

The most likely update will be to limits on gathering sizes, which are currently capped at 10 individuals indoors and 25 people outdoors. Those levels have been in place since early August, down from limits of 25 inside and 100 outside, which were set in place during the summer months before the arrival of the Delta variant surge in the Hawaiian Islands.

Hawaii County announced on Monday, Oct. 4 that special applications are already available to exceed the 25-person outdoor limit for sporting events, including situations that would include the return of spectators, subject to meeting several pre-conditions for approval.

Statewide mandates likely to remain in place are mask wearing requirements when frequenting any public, indoor setting. Currently, people are asked to keep their masks on unless actively eating or drinking. That latter element could revert to staying masked when moving about an indoor setting, but being allowed to remove a face covering for the entirety of the time one is seated, not just while actively eating or drinking.

Travel mandates associated with Hawai´i’s Safe Travels Program are also likely to remain in tact, as no significant changes were ever made to that program during less contagious and less precarious points earlier in the pandemic. Current regulations allow for vaccinated individuals to bypass Hawai´i’s mandatory 10-day quarantine, as well as the option for the unvaccinated to test out of quarantine via a pre-travel testing program.

The exemptions apply to those traveling within the US or from certain international travel ports that have reached cooperative understandings with the state. Those who are unvaccinated and who fail to take pre-travel tests (or come up positive for COVID-19 as a result of said tests) will be made to quarantine for 10 days under penalty of law.

“We know that it is not a good time to travel to the islands,” Ige said during a press conference on Aug. 23, 2021. “The visitors who choose to come to the islands will not have the typical kind of holiday that they expect to get when they visit.”

The governor acknowledged last week that these comments have likely had some impact on visitor arrival tallies over the last several weeks. Visitor totals since early September have hovered around, or often slightly below, 20,000 daily. Those daily numbers are down between 25-40% to the corresponding dates in September and October of 2019, according to data provided by the Department of Business, Economic Development & Tourism.

Ige said last week he was not yet ready to amend his carefully chosen public comments to encourage the return of tourism in Hawai´i to pre-pandemic levels.

More specific regulations to the islands of O´ahu and Maui could also be impacted by restriction rollbacks coming as early as week’s end, depending on the decisions of those county administrations.

Safe Access O´ahu requires proof of vaccination, with limited exceptions, for those wishing to enter high-risk indoor settings like bars, restaurants and gyms.

The Safer Outside Program on Maui limits outdoor gatherings to 10 people and indoor gatherings to five, with proof of vaccination required to frequent indoor dining options, as well as a 10 pm curfew and a 50% capacity limit on establishments like restaurants and bars, etc.