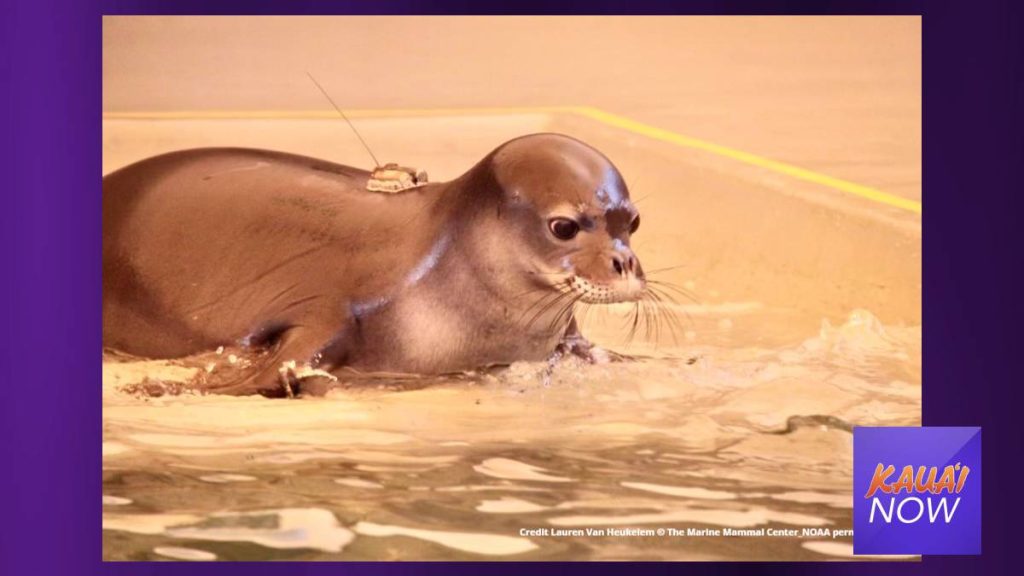 A young Hawaiian monk seal was successfully released back to the ocean after spending more than two months at Kailua-Kona’s Marine Mammal Center Ke Kai Ola for malnutrition and maternal separation.

ʻEleu was rescued in June from Papahānaumokuākea Marine National Monument. During her treatment, the pre-weaned pup greatly improved in overall body condition and stamina. According to officials from the Marine Mammal Center, the animal experienced a weight gain of more than 90 pounds, nearly tripling in overall weight.

“Rehabilitating a young pup in such a short period of time is no small feat,” said Dr. Michelle Barbieri, Lead Scientist for NOAA’s Hawaiian Monk Seal Research Program. “We applaud The Marine Mammal Center for the expert care they provided ʻEleu, and are honored to support her return to Papahānaumokuākea as part of our Hawaiian monk seal research and recovery activities and our partnership with the Center.”

ʻEleu was shuttled back to Kapou (Lisianski Island), which is within the national marine monument, on Sept. 10, by the Oscar Elton Sette, a NOAA research vessel transporting scientists and supplies to conduct monk seal research and conservation efforts in the Northwestern Hawaiian Islands. The animal was released from a beach pen a few days later.

“To return a young female pup back to the wild that had nearly zero chance of survival without intervention is an incredible success story,” said Dr. Sophie Whoriskey, Hawaiian Monk Seal Conservation Veterinarian at The Marine Mammal Center. “As an endangered species, each monk seal matters, and this case highlights the importance of our ongoing partnerships to help treat and return them back to their ocean home.”

Before her release, the seal was fitted with a temporary satellite tag that allows scientists to monitor her post-release. The satellite tag data will be combined with visual monitoring by researchers as possible.

The successful release of ʻEleu was made possible through the Center’s partnership with the National Oceanic and Atmospheric Administration (NOAA), the U.S. Fish and Wildlife Service (USFWS), and the US Coast Guard (USCG).

Since 2014, the Center has rehabilitated and released 36 monk seals, most of which have been rescued from and returned to the Northwestern Hawaiian Islands. as part of the partnership with NOAA, utilizing resources in the area to identify seals in need, rescue and rehabilitate them, and give them a second chance at life.

The Center’s partnership with NOAA and other cooperating agencies is more important than ever to prevent this endangered species from becoming extinct. Approximately 30% of monk seals that are alive today are due to conservation efforts led by NOAA and partners like The Marine Mammal Center.