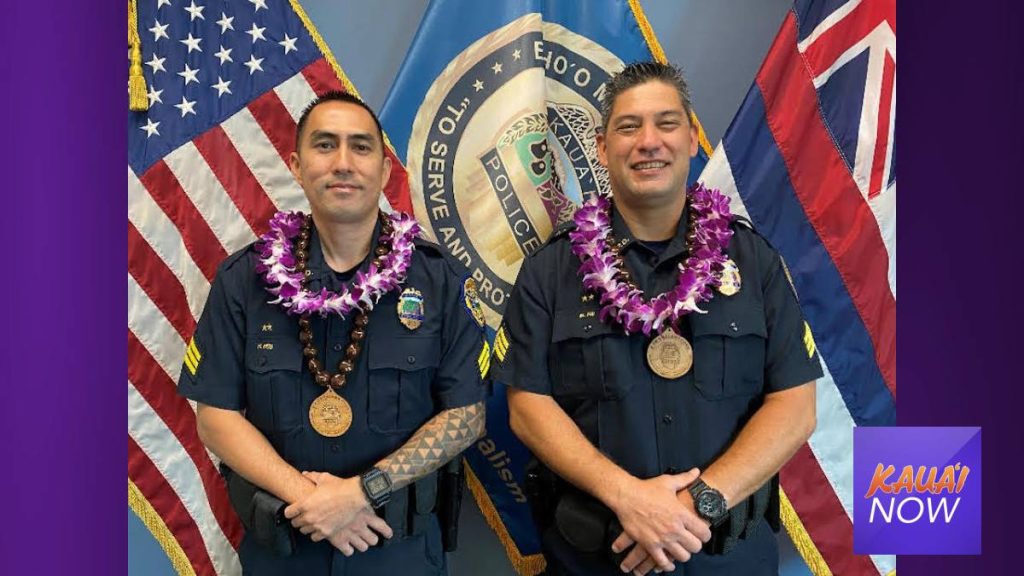 The two men were commended for taking on the responsibility and commitment of becoming accredited as certified bomb technicians for KPD. This is an auxiliary function on top of their primary roles as detectives.

“Having these skilled bomb technicians on island has brought us greater public safety and officer safety,” said ISB Capt. Paul Applegate. “It’s also enhanced explosive-related investigations and has created a quicker response time for threats and emergencies that allows normal operations of the general public to resume.”

In June 2020, following completion of all bomb technician training and certification, the HIBS, which consists of KPD, Maui Police Department and Hawaiʿi Police Department, was officially accredited by the US Department of Justice’s Federal Bureau of Investigation Hazardous Devices School for meeting all of the National Bomb Squad Commanders Advisory Board requirements.

Nii and Hsu then become responsible for responding to all accidental explosions, bombings, explosives, military ordnances and other related hazardous materials on Kauaʿi.

Since their accreditation, detectives Nii and Hsu have responded to and made safe one grenade, one blasting cap and nine marine markers, which were on various populated beaches around the island.

“The officers are required to retain their certification with active-duty status that includes maintaining physical and operational requirements and pursuing ongoing training,” said Capt. Applegate. “Through their dedication and hard work, detectives Michael Nii and Hanson Hsu have made and continue to make Kauaʿi a safer place for all of us.”

Prior to becoming technicians, the detectives were required to complete a Public Safety Bomb Technician course at the Hazardous Devices School at Redstone Arsenal in Alabama where they underwent six weeks of intense training. Through this training, they were able to acquire a high level of expertise not only related to how to render an explosive device safely but also how to properly handle, remove and dispose of said devices.