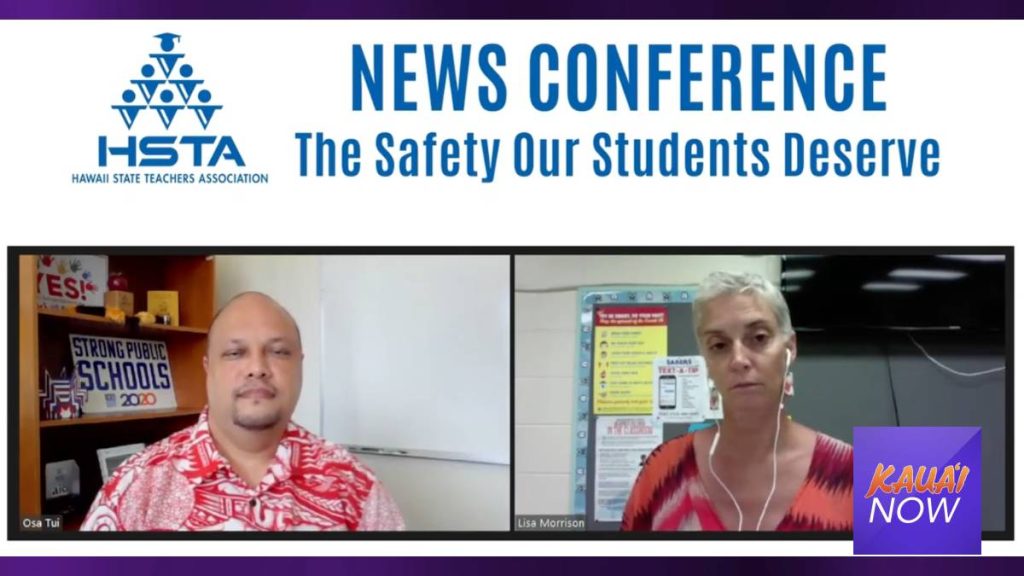 The Hawaiʻi State Teachers Association is calling for a seat at the decision-making table.

Concerns over the definition and enforcement of safety protocols at Hawaiʻi’s public schools continue among educators, as they enter the third week of classes amid a surge in reported COVID-19 cases statewide.

The HSTA on Wednesday, Aug. 18 demanded negations regarding changes to teachers’ terms and conditions of employment for the rest of the school year due to pandemic conditions.

The union also sent an open letter, which was signed by 2,000 educators statewide, to Hawaiʻi Department of Education Interim Superintendent Keith Hayashi, the Hawaiʻi Board of Education, and Gov. David Ige demanding impact bargaining that would ensure safer practices during the pandemic.

“Last year, we had a memorandum of understanding (MOU) that allowed schools to switch to alternative modes of instruction, including distance and hybrid,” HSTA president Osa Tui Jr. told reporters during a press conference Wednesday. “But the state refused to bargain a new MOU this school year, insisting that all schools would return to in-person learning with very limited alternatives.”

This planning, Tui added, means there are no provisions for distance learning instruction and no guarantees of key health safety protocols.

“I’m not saying we want to shut down all the schools. That’s not the right thing. But we have to have safety protocols in place,” Tui said. “Right now, the Department of Education makes all the rules with regards to what is in the health and safety guidance. When something goes wrong, we have nothing to hold them accountable to. They have to be accountable. And that’s why we want to meet with them.”

Hayashi released a statement in response to the HSTA press conference. He did not address intentions to meet with HSTA. He said in-person learning is the best education model for successful student outcomes, and the HIDOE is confident that schools are providing a safe environment for students and staff.

“It is our duty and responsibility to keep our schools open for students who need us not only for in-person learning, but for socialization, services tied to mental health, and even meals. But we cannot do this alone,” Hayashi stated.

HIDOE releases weekly COVID-19 case counts connected to public schools every Friday. There were 325 confirmed cases statewide during the week of Aug. 7-13, according to the official count from the department. Tui expects the weekly numbers to only increase as the year continues.

Lisa Morrison, HSTA treasurer and teacher at Maui High School, also spoke at the press conference. She said data is only as good as the use you make of it.

“I think the important question is what the DOE plans to do depending on the number of cases,” Morrison said. “They’ve indicated publicly that there’s no threshold for them that they would actually take a different action. We’re worried it could just keep going up and up without any change.”

When Hayashi started two weeks ago, Tui said he promised strict health and safety protocols would be enforced.

“Yet, teachers have been expressing that this is not the case and they are being put between a rock and a hard place,” he said.

During the press conference, the HSTA president described what some of the classrooms look like.

In some schools, Tui said, students are forced to sit side-by-side at desks that seat two students. Many are also standing in long lines in crowded cafeterias, where all students are entitled to free meals this year.

“Our students are not robots who will not keep still the entire day,” Tui said. “They are curious and carefree children who sometimes don’t know of or don’t care about the consequences that could befall them or those they closely interact with.”

The HSTA president said they are seeing more schools having to shut down classrooms and quarantine dozens of students at a time, or move children to cafeterias where multiple teachers are forced to quarantine.

“Protocols are inconsistently being enforced from school to school,” Tui added. “Some administrators err on the side of caution, quarantining an entire class when a positive case is reported.”

At other schools, Tui said administrators only quarantine one or two students whose desks were shown on a seating chart to be directly next to a child who just tested positive for COVID-19.

Other schools have quarantined just the positive child without identifying any close contacts, HSTA asserted.

“It is clear these quarantine protocols are anything but strict — despite what the department and governor claim,” Tui said.

Hayashi stated schools are doing everything within their control to diligently implement the core essential strategies set by the state Department of Health, and evidence so far shows that these efforts are working.

“While community transmission levels have increased, we have no known cases of students getting sick with COVID-19 as a result of coming to school, and there is no evidence indicating our schools are amplifiers of transmission,” Hayashi said.

Administrators and complex superintendents make the decision who quarantines if a COVID case is identified.

“Unfortunately,” Tui said, “some of the health and safety guidelines are nebulous.”

Hayashi said the DOE is using multiple mitigation measures consistently and in combination, which gives schools the flexibility to achieve safe learning environments even when not every mitigation measure can be applied.

“The core essential strategies schools are implementing consistently are: promoting vaccinations for staff and eligible students, staying home when ill, consistent and correct masking, and proper hand hygiene. Cohorting, physical distancing, improving ventilation, and cleaning and disinfection … are additional mitigation strategies to be applied in combination to the greatest extent possible,” the interim superintendent stated.

In the open letter, a Kauaʻi teacher expressed safety concerns.

“The public is being told that it’s safe at schools because schools are following the mitigating measures,” the teacher stated. “I am here to say, ‘NO, THEY ARE NOT!'”

Tui called on educators and members of the community to stand in solidarity.

“Teachers are professionals and should be treated as such,” he said. “It’s time we all work together to obtain the safety our children deserve.”