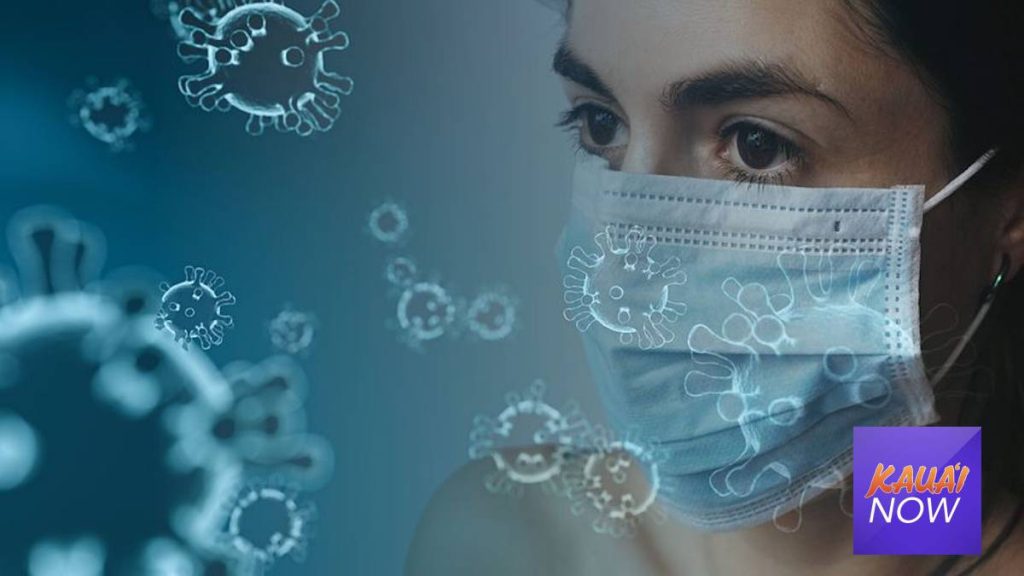 Coronavirus numbers are surging throughout Hawai´i at levels not seen since January, and rising exponentially with no reprieve on the immediate horizon, according to state health officials.

A total of 243 new cases of the virus were identified across all islands on Thursday, July 22, which represents the largest single-day total in six months. It marked the eighth consecutive day of triple-digit case totals. Three more COVID-related deaths were also reported, pushing the confirmed statewide death toll to 527 since the pandemic began.

Janet Berreman, Kaua´i District Health Officer, said Hawai´i has seen a “rapid and exponential” increase in case totals since the July Fourth Weekend that is “showing no signs of diminishing.” While holiday celebrations likely played some role in the current COVID spike, Berreman said the main factors are the presence of the Delta variant of coronavirus, which is now dominant in Hawaii, as well as travel.

Particularly problematic, she added, has been travel by unvaccinated residents to the mainland, who are bringing the virus home and causing a high incidence of community spread. Brooks Baehr, who works with the State Department of Health’s COVID-19 Pandemic Response Team, said community transmission is now the virus’s primary mode of travel. It is happening most frequently among groups of friends and family who are unvaccinated and shirking guidelines, such as mask mandates while interacting indoors for long periods of time.

A total of 50 new cases were identified on the Big Island alone Thursday, which Baehr and Berreman each said are largely due to clusters caused by community spread.

“Much of what is happening now can be prevented if people will get themselves vaccinated,” said Baehr, again reiterating the safety and efficacy of the free and widely available vaccines against all variants of COVID-19. “Get vaccinated. Wear masks when you are indoors. Stay home if you don’t feel well. Avoid large crowds. And avoid travel if you’re not vaccinated.”

Clusters are currently present in every major county in Hawai´i, said Berreman, adding that popular sites for congregation such as restaurants, bars, places of worship, lodging areas, and shelters are where most clusters gain a foothold.

Baehr explained that while vaccinated individuals are occasionally testing positive for the virus, new cases are “overwhelmingly among unvaccinated people traveling and not wearing masks indoors.”

Another large portion of new infections are occurring among children under the age of 18. DOH said that 66 of the 243 cases identified Thursday were found in kids, many of whom are under the age of 12 and are not yet cleared by the US Food and Drug Administration to receive any of the vaccines currently being administered via emergency use authorization.

Of the three new virus-related deaths confirmed Thursday, two occurred on O´ahu and one was identified on Maui. All three patients were between the ages of 50 and 69 years old, and all suffered from multiple underlying conditions.

A female patient on O´ahu between the ages of 60-69 who died was fully vaccinated, Baehr said. Hers marks the second fatality linked to a so-called “breakthrough case,” which is defined as a person who becomes ill after completing their vaccination schedule.

There have been 527 virus-related deaths confirmed statewide since the DOH began tracking the pandemic. Two of them have involved fully vaccinated individuals, officials said Thursday. Both of those people were considered elderly and suffered from underlying health problems, Baehr continued.

Evidence continues to show that vaccinations are highly effective at preventing severe illness from COVID-19 infection, as well as hospitalizations and/or deaths related to contracting the disease.

“The good news is that our vaccines are highly effective at preventing severe disease, hospitalization and death,” Berreman said. “(But) the situation is really urgent.”

Dr. Edward Desmond, administrator of the DOH’s State Laboratories Division, said that as of early July, the Delta variant has become the dominant strain of COVID-19 in Hawai´i. It is now present on all islands.

In the state’s latest variant report ending July 3, 2021, a total of 55% of sampled cases were caused by the Delta variant. During the two weeks prior, it accounted for only 17%.

“This is more or less what was anticipated,” Desmond said. “It’s more transmissible than other variants.”

He added that the increase in cases is possibly linked to the now ubiquitous presence of the Delta variant throughout Hawai´i but reiterated that recent studies, including an article published in the New England Journal of Medicine, shows that US-authorized vaccines remain “highly effective against the Delta variant.”

Baehr said that vaccination rates statewide saw a steady decline in April and May. DOH then launched its #GetHawaiiVaccinated campaign in June, resulting in the state’s first increase in vaccination rates in weeks. By the second week, that number had leveled off. Currently, around 16,000 shots are being administered weekly.

A data lag does exist, and Baehr said he is hopeful that news of the Delta variant’s presence coupled with the statewide spike in cases will encourage some who have been on the fence about vaccination, or simply putting it off, to go ahead and get the shots.

“These are real people, these are families, these could be people you know,” Baehr said of those falling ill. “It can happen tomorrow in your community or to your family. This really should be a wakeup call.”

“If you’ve been putting this off, it’s time to go in, get vaccinated, and be part of the solution.”

Whether Hawai´i will reinstate virus restrictions in the interest of public health, and what metric would be applied to determine that decision, remains unclear.

Baehr was asked Thursday if the state is primed to make such a transition, but responded that he did not have the necessary information to provide an accurate answer.

“That question is best directed toward the state administration,” Baehr said. “The Department of Health gives guidance. We are laser focused on health. Those who make these rules … those people have to consider a lot more.”

The decision will ultimately fall to Gov. David Ige. The governor speaks with the media weekly and has been asked what conditions might necessitate a return to COVID-19 restrictions.

To date, Ige has shied away from offering anecdotal or statistical scenarios that would incline him toward a return to restrictions. However, he has said consistently that he reserves the right to reinstate any measures he believes are necessary to protecting the public health, adding that he would not be hesitant to do so should the COVID-19 situation in Hawai´i demand such action.

As for public schools, they remain expected to begin on schedule with in-person learning serving as the primary mode of education. However, Berreman encouraged all parents to vaccinate their children against COVID-19, assuming they are at least 12 years of age.