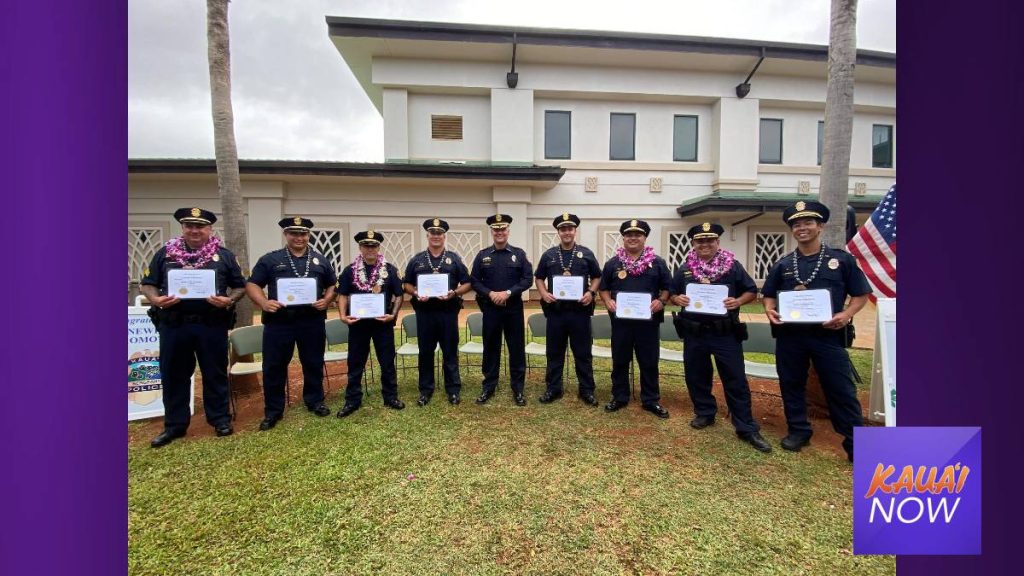 The Kaua‘i Police Department (KPD) held a special ceremony Friday, July 16, to promote eight officers at its headquarters in Līhu‘e.

“I’m honored to be promoting these officers today,” said Chief of Police Todd G. Raybuck. “Each one of them has showed exemplary service to not only this department, but to the entire community. I know that they will continue to wear their badges with dignity and with a wholehearted commitment to the maintaining the public safety of this island.”

“We recognize to continue to do this work is a choice. A noble one that you have made,” said County of Kauaʿi Managing Director Michael Dahilig. “However, with more responsibility means you can have more impact. We acknowledge this work of keeping our public safe has become increasingly tricky in this day and age. With that – remember to be humble with more authority. Remember to be kind. Remember you are a leader and an example.”

Lance I. Okasaki Jr. was promoted to the rank of Lieutenant. Okaski was born and raised on Kauaʿi. He graduated from Kauaʿi High School and attended the Oregon Institute of Technology. He started his career with the department in 2012. He began as a Līhuʿe Patrol Officer and has also served as a School Resource Officer at Kapaʿa and Kauaʿi high schools. He was eventually promoted to Sergeant and continued to serve with the Patrol Services Bureau in the Kawaihau District. He was later assigned to the Administrative Technical Bureau and worked as a sergeant of Community Relations and School Resource Officer. He currently serves as the bureau’s Research and Development Sergeant.

Daniel Oliveira was promoted to the rank of Lieutenant. Oliveira was born and raised on Kauaʿi. Upon graduating from Kauaʿi High School, he joined the military and spent four years in the U.S. Navy before being honorably discharged. He then attended the University of Hawaiʿi at Mānoa where he received a bachelor’s degree in Asian Pacific History. In 2001, Oliveira was hired with KPD and was part of the 71st Recruit Class. He spent six years in the Patrol Services Bureau, Platoon 2, Līhuʿe. In 2006, he was assigned to the Investigative Services Bureau, and spent the next six years with the Vice Section. In 2012, Daniel was promoted to the rank of Sergeant and was assigned within the Investigative Services Bureau as a Detective. In 2013, he returned to the Vice Section as the Operations Sergeant. In 2020, he returned to Patrol and has been serving as the Patrol Administrative Sergeant.

Makana Rivera was promoted to the rank of Lieutenant. Rivera was born and raised on Kauaʿi. He graduated from Kapaʿa High School in 2001. He was hired at KPD in 2009. He has held various assignments throughout the years, including with the Patrol Services Bureau, as a Vice Investigator, a Property Crimes Detective and a Major Crimes Detective.

Kevin C. Gras was promoted to the rank of Sergeant. Gras is originally from Seal Beach, California, and moved to Kauaʿi in 2015. He graduated from Los Alamitos High School and obtained an associate degree from Santa Ana College. Gras was hired by KPD in 2015 and has been working with the Patrol Services Bureau in the Hanalei District for the past five years.

Lucas J. K. Hamberg was promoted to the rank of Sergeant. Hamberg was born and raised on Kauaʿi. He attended Hawaiʿi Preparatory Academy in Kamuela, Hawaiʿi Island. On April 16, 2004, he transferred to KPD from the Kaua’i Fire Department where he served as a Lifeguard since 1995. Hamberg has served various roles within KPD, including as an Officer for the Patrol Services Bureau serving the Kawaihau/Hanalei District, serving on the Special Response Team and as a School Resource Officer at Waimea, Kaua’i and Kapa’a high schools. He also served as a Training Instructor with the Training Cadre, as an Officer In Charge, as well as a Field Training Officer in the Patrol Services Bureau.

Hanson S. Hsu was promoted to the rank of Sergeant. Hsu was born and raised on Kauaʿi. He attended Kapaʿa High School and graduated from Chaminade University where he earned a Bachelor of Science degree in Criminology and Criminal justice. He was hired at KPD in 2008. Hsu was initially assigned to the Patrol Services Bureau and has since transferred to the Investigative Services Bureau where he works in Vice narcotics. He also serves on KPD’s crisis intervention team, the Special Response Team, and is a bomb technician assigned to the Hawaiʿi Interisland Bomb Squad.

Bobby L. K. Thompson was promoted to the rank of Sergeant. Thompson was born and raised in Palolo Valley on Oʿahu. He moved to Kauaʿi in the beginning of 2000. He graduated from Kaimuki High School. Thompson was hired with KPD in 2012. He has served as a patrol officer in the Kawaihau District Platoon 2, Officer In Charge Kawaihau District Platoon 2, a School Resource Officer for Waimea and Kauaʿi high schools, and a Field Training Officer. Thompson is also on KPD’s Peer Support Team, is an FAA certified Drone pilot on KPD’s Drone Team, a member of KPD’s Communications Team, and is a trained Crisis Intervention Officer.

The Master of Ceremony for Friday’s event was Captain Paul Applegate. The pinning of the badges was preceded with a blessing by Police Chaplain Kevin Cram and speeches by Dahilig, who was representing Mayor Derek S. K. Kawakami, as well as Chief Raybuck.