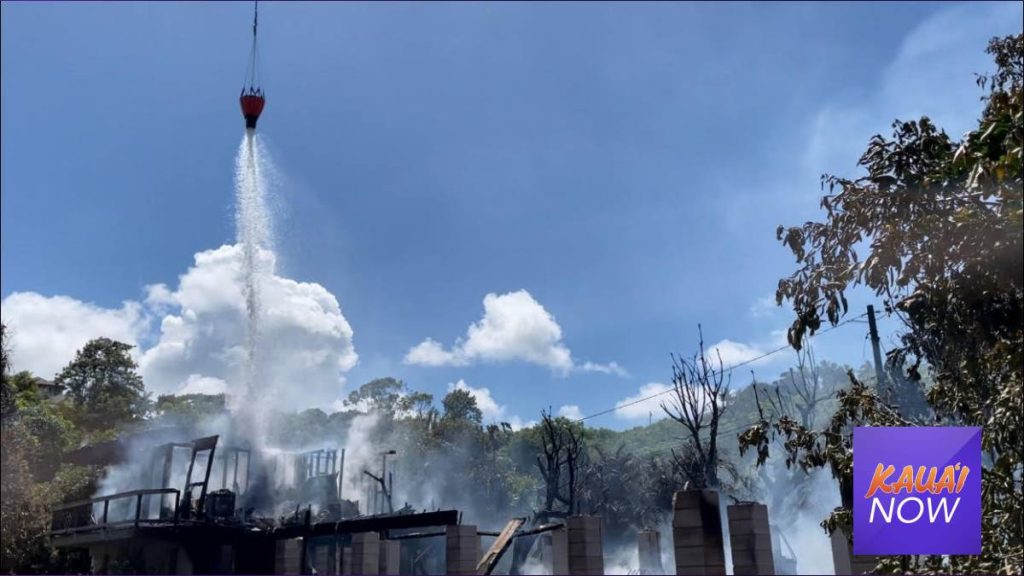 A two-story home in Moloa‘a on Ko‘olau Road burned to the ground leaving six people displaced.

Kaua‘i Fire Department responded the blaze at approximately 1:20 p.m. on Thursday, July 15. Crews arrived on scene 10 minutes later and discovered the dwelling to be fully engulfed in flames.

No injuries were reported, and residents were not at home at the time of the fire.

A portion of Ko‘olau Road was closed for about five hours, as first responders established a post and shuttled water. Only local traffic was permitted to use the road.

Firefighters utilized Tender 1 and a tanker from the Department of Public Works and shuttled water via Ko‘olau Road to assist with extinguishment. Additionally, Air 1 used a water drop on the blaze.

Volunteers with the American Red Cross assisted the displaced individuals.

Today, crews with the KFD Fire Prevention Bureau are on scene, as the cause of the fire remains under investigation. Damages to structure and belongings are estimated at $965,000.

Personnel from the Kapa‘a, Kaiakea, and Līhu‘e fire stations; Rescue 3; Air 1; the Fire Prevention Bureau; the on-duty Battalion Chief; Kaua‘i Police Department; the Department of Public Works; and the American Red Cross responded to the incident.