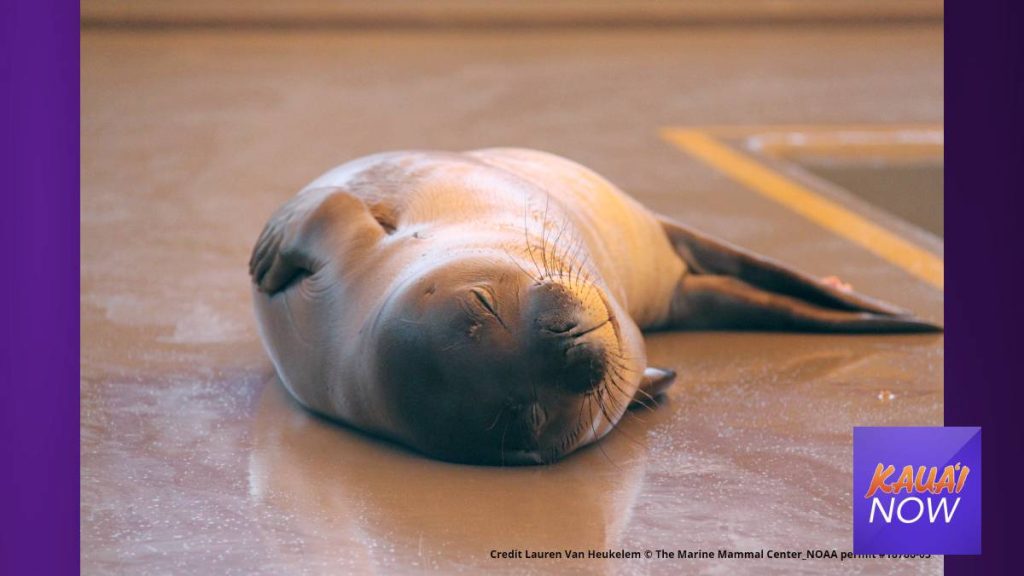 An endangered Hawaiian monk seal pup prematurely separated from its mother was rescued from Papahānaumokuākea Marine National Monument and airlifted to Hawai‘i Island’s mammal hospital for treatment in Kailua-Kona.

Biologists from US Fish and Wildlife Service (USFWS), had been monitoring the seal, identified as PP08, at the National Wildlife Refuge and Battle of Midway National Memorial since late May. Born in mid-April, PP08 weaned from her mother too early and was observed underweight, a major risk for a female seal in an endangered population.

“Separated from her mom too soon, this young pup had nearly zero chance of survival without intervention,” said Dr. Sophie Whoriskey, Hawaiian Monk Seal Conservation Veterinarian at The Marine Mammal Center. “Each individual matters, especially for an endangered species, and we are grateful to our partners for their support in achieving our mission, and ensuring this young pup has a second chance at life.”

NOAA coordinated logistical and operational support for this rescue in partnership with USCG, USFWS and the Center. On Tuesday, June 15, a US Coast Guard C-130 aircraft, transported Whoriskey and her team to Midway Atoll to accompany PP08 on her return flight to Kona.

“PP08 was measured at just 78 cm girth, and what we’ve seen is that pups who wean at less than 90 cm girth have essentially no chance of surviving to the next year,” said Dr. Michelle Barbieri, Lead Scientist for NOAA’s Hawaiian Monk Seal Research Program. “Thanks to the combined efforts that went into detecting, rescuing, and transporting PP08 to definitive care at The Marine Mammal Center’s hospital, especially before she became too depleted or sick, she has a very good chance at being fully rehabilitated and released back in Papahānaumokuākea, where she’ll have a second chance at growing to adulthood.”

During her initial critical care period, Center experts noted that PP08 was moderately malnourished but is alert and active. The Center’s veterinary team took a series of blood samples and a fecal sample for further analysis during the animal’s admission exam.

“PP08 has been feisty and extremely vocal since her arrival, which is a really positive sign for a young pup,” Whoriskey said. “She is currently being tube fed a mix of electrolytes and sustainably ground herring to help boost her weight. Our team plans to introduce her to whole herring and offers of live fish in the coming days to help further spur her appetite and get the vital nutrients she needs.”

Since 2014, the Marine Mammal Center has rehabilitated and released 35 monk seals, most of which have been rescued from and returned to Papahānaumokuākea as part of their partnership with NOAA, utilizing resources in the monument to identify seals in need, rescue and rehabilitate them, and give them a second chance at life. Approximately 30% of monk seals that are alive today are due to conservation efforts led by NOAA and partners like The Marine Mammal Center.

“One of the Coast Guard’s mission sets includes the protection of living marine resources,” said Lt. Sam Potter, a pilot at Air Station Barbers Point involved in the rescue. “It is a very fulfilling mission and we are proud to assist our partner agencies in recovery efforts of these endangered animals.”

Members of the public should keep a safe distance from monk seals and report sightings on Hawai‘i Island to the Center’s response team at the 24-hour hotline: 808-987-0765. Report all monk seal sightings, injuries, and strandings to NOAA’s statewide toll-free hotline at 888-256-9840.